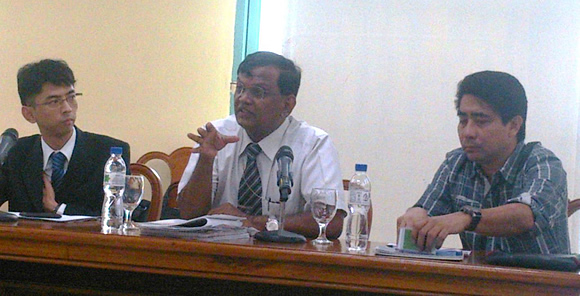 MANILA, Philippines – The Technical Assistance (TA) on Climate Resilience and Green Growth in Critical Watersheds kicked off with a meeting between the team of consultants, representatives from the Climate Change Commission (CCC), Asian Development Bank (ADB), and the Embassy of Japan.

The TA is funded by the Japan Fund for Poverty Reduction (JFPR) through the ADB, and the Climate Change Commission (CCC) serves as the implementing agency for the government of the Philippines. The TA seeks to demonstrate climate-resilient green growth options in critical watersheds in the Lower Marikina River Basin covering nine municipalities in Lower Marikina (Marikina, Cainta, and Quezon City), Camarines Sur (Naga City, Milaor, and San Fernando), and Davao Oriental (Banganga, Cateel, and Boston).

Mr. Alexis Lapis of the CCC said that the project is part of the localization of the National Climate Change Action Plan, where the local government units are the frontline agencies to respond to climate change impacts; hence, there is a need to mainstream climate change not just in the national, but most importantly, in the local development plans.

Likewise, Mr. Kentaro Yamane, representative of the Embassy of Japan acknowledged the importance of mainstreaming climate change concerns in the local government level by developing and strengthening community level disaster resilience. Mr. Yamane expressed the support of the government of Japan to the project through JFPR and hopes for its success.

Furthermore, Dr. Ancha Srinivasan, Principal Climate Change Specialist of ADB said that the project will bring in international experiences and best lessons from the other countries especially in terms of climate resilience and green growth that the LGUs will be able to learn from and eventually adopt based on their local conditions.

The meeting also provided the venue for the clarification of issues in terms of resources as well as arrangements and expectations between the team of consultants and CCC as the implementing agency. Likewise, the group agreed on the schedule of the project briefing in the nine municipalities and the structure and contents of the inception report, which is one of the first outputs expected from the team.

The meeting was attended by the team of consultants from SEARCA, Woodfields Consultants, Inc., Ergons Project Marketing Consultants, CTI Japan, as well as project staff from the CCC.