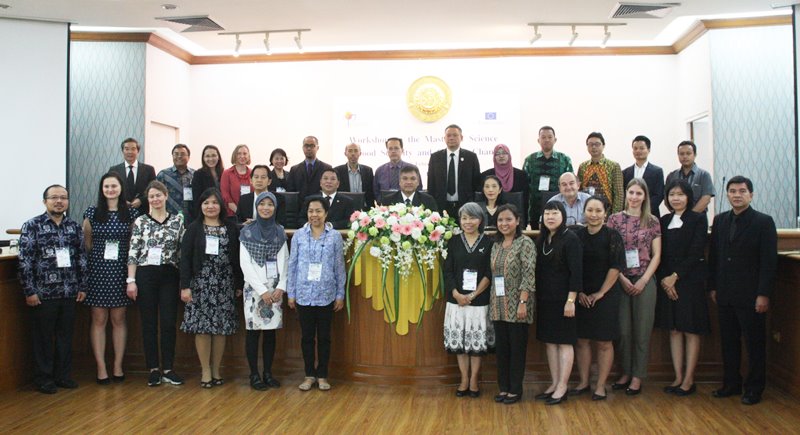 Thirty-three representatives from 16 partners converged at Kasetsart University (KU) in Bangkok, Thailand on 14 – 16 February 2017 for a workshop to finalize the training tracks, and develop a quality plan for the Master of Science in Food Security and Climate Change (MS FSCC). This project is partially funded by the ERASMUS + Capacity Building in Higher Education program of the European Commission.

The project is an initiative of the Southeast Asian University Consortium for Graduate Education in Agriculture and Natural Resources (http://uc.searca.org), and is being led by KU and SEARCA. Dr. Poonpipope Kasemsap of KU serves as the MS FSCC project leader. Aside from the five (5) consortium member universities, six (6) other universities in Southeast Asia, and three (3) universities from Europe are partners in this project. SEARCA, the French institute IAVFF-AGREENIUM, and AGRINATURA —a consortium of European universities — are also project partners. Dr. Didier Pillot of Montpellier SupAgro and Vice President of AGRINATURA, is instrumental in the project development and its implementation.

The workshop also tackled the rules of the Educational, Audiovisual, and Culture Executive Agency (EACEA) of the European Commission in relation to the grant and its implementation. Target dates for the other activities were also discussed, such as the final training tracks and the conduct of the Summer Course in Universitas Gadjah Mada (UGM), Yogyakarta, Indonesia. The Summer Course set in July 2017 will be co-organized by UGM and BOKU of Vienna, Austria.

Students in the MS FSCC will get two degrees from two universities. They will be spending at least a month in a second university, and take a Summer Course, possibly in a third university.

At the Closing Ceremony of the workshop, Dr. Gil C. Saguiguit, Jr., SEARCA Director, expressed SEARCA's support in the project. The Call for Applications for the MS FSCC is set to open next month. (Camille Joy V. Enalbes)