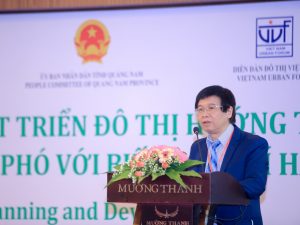 It was held in the context of globalization and increasing economic competition, along with the challenges of climate change, the development of suitable urban development policy is becoming a national concern. In order to support central institutions and local authorities in implementing planning and development goals toward green growth, the Forum was held ahead of the UN Conference on Housing and Urban Sustainable Development (Habitat III) so that it carried important meaning.

The Vietnam national report for Habitat III was introduced at the forum. This report reviews 20 years of achievements, identifies challenges and Vietnam’s strengthened political commitment for sustainable urban development. At the event, participants sought to enhance the effectiveness of urban planning and management, and relevant legal framework, better access to urban services such as housing, infrastructure facilities and financial resources. Poverty reduction, environmental protection and climate change adaptation were also discussed at the forum.

Vietnam’s urban system has reached many positive achievements, significantly contributing to the national economic development over the past two decades. Rapid urbanization has resulted in inefficient land use, disjointed infrastructure, and low urban competitiveness, causing negative impacts on the people’s living conditions and the economic growth of cities and the nation in general. Vietnam is among the countries most affected by climate change, and the issue poses new challenges to the country’s urbanization process. It is very necessary to promote fully the driving role of urban system through a sustainable urban development policy toward green growth and climate change adaptation, according to experts.

Nguyen Quang, Director of UN-Habitat Vietnam said that the country should encourage the involvement of the entire community in urban construction and planning development. At the forum, international experts shared experiences in providing finance for the innovative of green growth and climate change and developing smart cities in the Republic of Korea. 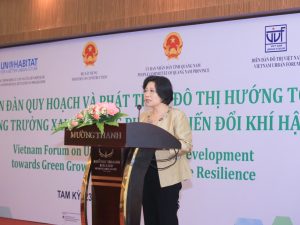 The forum introduced the Initiative on Planning and Urban Development in 2016 (also known as Tam Ky Initiative) with six recommendations, including the improvement of effectiveness of urban planning and management, improving of governance and effectiveness of the legal framework for urban development, improving access to urban services, poverty reduction, enhancing access to housing, environmental protection and effective response to climate change. Deputy Minister of Construction Phan Thi My Linh underlined the role of urban areas in realizing economic and environmental goals, saying that provides urbanisation impetus to economic growth.