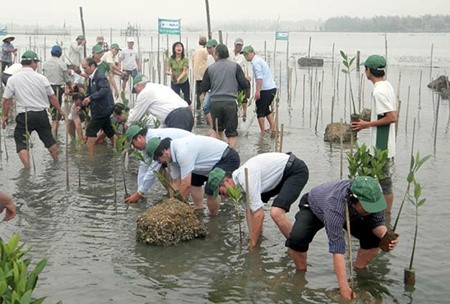 Mangrove trees are planted in the Thuan An estuary, Thua Thien Hue Province. Hundreds of households in the province's Huong Phong Commune have benefited from a project to plant about 23,000 mangrove trees. — Photo baothuathienhue.vn

Ru Cha is a mangrove forest located along the Tam lagoon in the province's Huong Phong Commune.

It is also a protection forest, home to different types of aquatic species, a breeding ground for migratory birds and a potential destination for ecological tourism.

The project, which is aimed at raising awareness of the local authorities and residents of mangrove forest and also conserving biodiversity in the lagoon areas, was jointly sponsored and implemented by the World Wildlife Fund (WWF) and Microsoft.

It was designed to help the area and its residents adapt to climate change by following measures such as protecting transport roads and dykes, and building environmentally-friendly aquaculture ponds, the WWF said.

Dang Duy Manh, a local farmer living in the Huong Phong Commune, said that every year during rainy season, the dykes and other infrastructure systems were damaged by storms.

He had to spend a lot of money to reinforce dykes to protect his aquaculture pond, he said.

"Since about 1,000 mangrove trees were planted around my aquaculture ponds over the past two years under the project, I saved hundreds of millions of dong each year," he added.

Pham Ngoc Dung, head of the Economics Office of the provincial People's Council, said that the mangrove area of Ru Cha was known as an important breeding ground for aquatic organism and a barrier against storms.

However, this area had been seriously reduced in recent years, and was estimated to be only 4.65 ha, he said.

The project, aimed at increasing the forested mangrove area up to 20 ha, had a positive effect on the surrounding environment and yielded economic benefits, he said.

According to the WWF, the reduction of the Ru Cha area has led to a decline in biodiversity, degradation of aquatic resources and fewer migratory birds.

The decline has also made the region more vulnerable to damaging impacts of climate change because the land here is in the low terrain and located near the Thuan An estuary and Tam Giang lagoon.

Every year, during floods season, sea water intrudes into this land, causing erosion, bringing down houses and damaging crops and aquaculture ponds.

Van Ngoc Thinh, WWF Viet Nam Country Director, said that the WWF and Microsoft shared a vision to reduce vulnerabilities and build resilience to counter the impacts of climate change in Viet Nam.

"We believe that this partnership is an excellent example of how business can step up and help support national efforts in addressing challenges in an area," he said.—VNS