Lives of many people at stake in flood-prone northern Vietnam 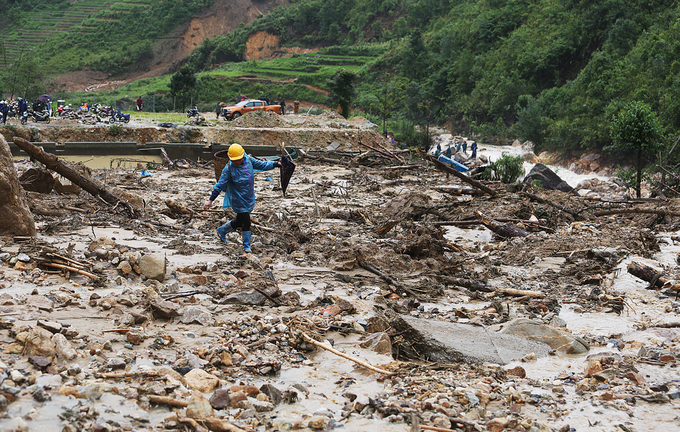 A woman walks on what remains of her house and farm after destructive floods in Ha Giang Province, northern Vietnam, on June 24, 2018. Photo by VnExpress/Ngoc Thanh

Mining, deforestation, and dams have destroyed their terrain and rendered them extremely vulnerable to flash floods.

He is an unnamed Thai man. Not a Thai national, but a member of Thai ethnic minority, one of 54 such communities in Vietnam. He’s 30 years old and lives with his wife and children next to a stream in the mountainous Phong Tho District in Lai Chau Province.

The land his family lives on was handed over from his parents. Their house, or what passes for a house, is a cluster of bamboo beams shooting up from the ground and covered with a “roof” of plastic sheets, that shields the family from the elements.

Every day, his wife does all the work: from babysitting to feeding the cattle to tending the house, while he just sleeps, wakes up, drinks, then sleeps some more.

I asked him why he decided to settle here. This area is highly vulnerable to flash floods, as it is only a couple of meters away from a nearby stream. If a flood did occur there would be no time to react. The only way out is through an old, rusty bridge across the stream itself, and if one gets to the other side, one gets to a road winding along the slope of a mountain.

He said he had no choice. His family’s never thought about moving away from here because this land has been their entire life. The pigs and chickens they raise, the corns and yams they farm, are not so easily replaced.

He isn’t alone. I found 49 other households with hundreds of members, risking their lives every day in a flood-prone area. If flooding on the same scale as the one that ravaged other places in Lai Chau and the nearby Ha Giang Province last month gets here, almost everyone will most certainly be swept away. Thank God that didn’t happen.

Throughout many years of researching natural disasters and climate change, I notice a familiar narrative. The people I’ve met in these mountains; the Dao, the Mong, the Thai… they’ve never expected flash floods. They never imagined a flood come so quickly, so strongly, so mercilessly.

That is happening, though.

Things are not how they used to be. Normally, natives could make a fair estimate of how much rain would fall on a certain day, how high or low water levels would get, in which time of the year was flooding likely to happen, so that they can move to higher ground.

But the flood that swept through northern Vietnam last week was unlike anything before it. First, the rain came down too strongly in too short an amount of time that there was no way an average person could predict what would happen next. In just 10 hours, beginning from 7 p.m. on June 23, Lai Chau Province recorded unusually high rainfall levels, between 300 to 450 millimeters.

Second, due to changes in the terrain caused by mining and deforestation throughout the last decade, floods become even deadlier than they used to be, reaching higher velocity as they rush downhill and catch people off-guard. There was no way for the people to notice these changes because they happened from so far away.

Third, dams in both Lai Chau and Ha Giang are too small and incapable of regulating incoming floods. What’s worse, our people are at the mercy of our neighbor China, as it has several reservoirs upstream, which could be discharged at any time beyond our control.

My colleagues and I have tried to devise several flood alarm systems for people living in the mountainous regions of northern Vietnam. One involved a sound system to warn village heads of incoming threats so they could inform the people. But one needs to be aware of the incoming threats beforehand to give a warning, and this does not happen always.

Another system would use a set of cameras to monitor the river upstream and is hooked up with local cellular service providers. A warning could then be sent to each mobile phone user with a text message, should a situation arise. However, such a system would cost too much money to operate and maintain.

It became clear to us that there were no easy solutions. We lacked the money and the technological expertise to actually carry out any of these ideas.

The only solution left is to convince people to move to safer areas. But humans are creatures of habit, especially people living in the mountainous regions, whose traditions and cultural values have been entrenched deeply in their identity for hundreds of years.

But there are lives at stake.

It is time that the government takes action, comprehensive action, without further ado.

*Nguyen Ngoc Huy is a Vietnamese expert on climate change at Vietnam National University, Hanoi. The opinions expressed are his own.