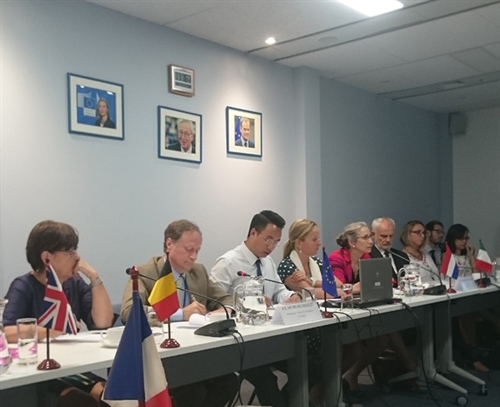 The EU Delegation to Việt Nam and embassies of some EU countries held a press conference on climate change in Hà Nội on Wednesday. The event was part of the European Climate Diplomacy Week in the country from September 19-25.

Ambassador and head of the EU Delegation to Việt Nam Bruno Angelet said the EU had assisted the Vietnamese Government to build a report on intended nationally determined contributions (INDC) which will be sent to the Secretariat of the UN Framework Convention on Climate Change. It is also helping the country to achieve those INDCs.

The bloc was working with Việt Nam’s Ministry of Planning and Investment in green growth and with the Ministry of Industry and Trade to reform the energy industry with non-refundable aid worth 350 million euros (more than US$392 million), he noted.

Belgian Ambassador Jehanne Roccas said her country’s Government was working with Việt Nam to deal with climate change through policy dialogues among specialists on laws, policies and activities. The two countries will begin a programme on climate change and the environment worth 85 million euros ($95.3 million) in 2019.

A 50-million-euro loan from Germany’s KfW Development Bank is financing a wind power plant in Việt Nam. The factory is set to be inaugurated this November and help reduce 28,000 tonnes of CO2 emissions every year, according to the German Embassy.

At the press conference, representatives of the embassies of Demark, Finland, France, Italy, the UK and Spain also gave information about ongoing and future co-operation projects on climate change with the Southeast Asian nation.

They said as Việt Nam was among the 10 countries most vulnerable to climate change, it should become a low-carbon economy. — VNS