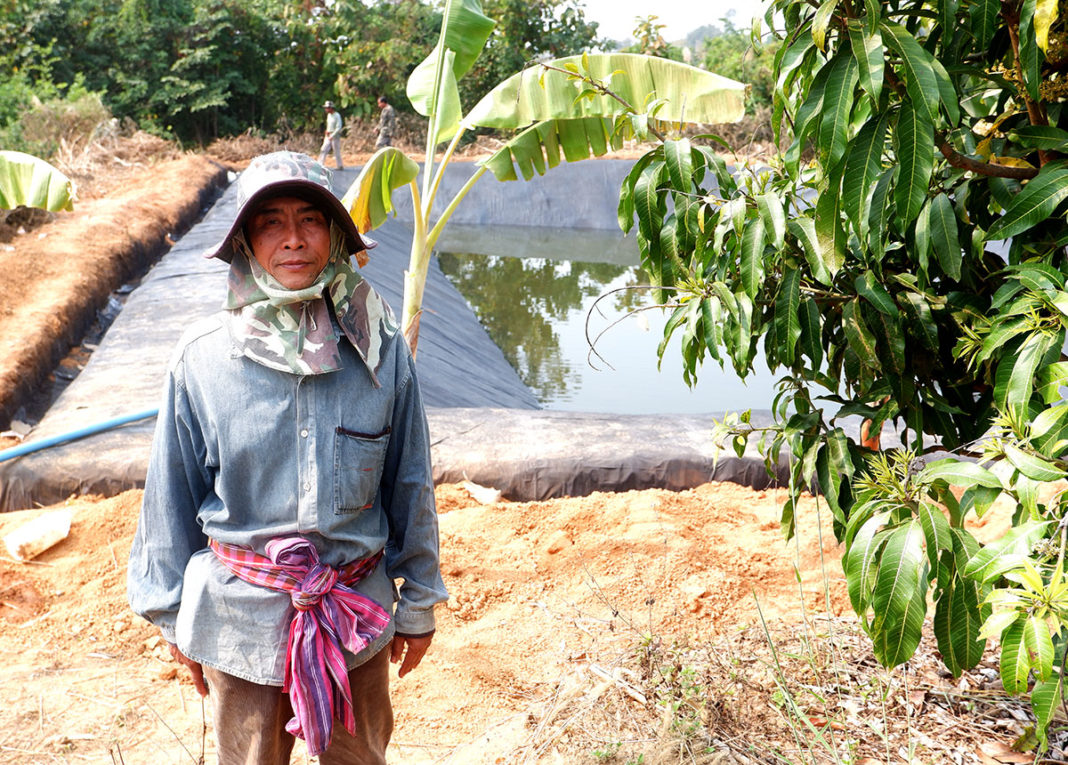 As PM2.5 air pollution rose to a toxic high in Bangkok and other parts of Thailand, the public turned its attention once again to the long-tolerated practice of open field burning – to get rid of dead vegetation, rice residue, weeds, and clear the lands for the next crop cycle.

Farmers say the burnings are necessary despite the environmental toll because they are the cheapest way to clear the crops. They simply do have no much of a choice; Thai farmers often labor for little money to repay debts, selling crops for a loss.

But the National Innovation Agency, together with a number of private firms, believe that there’s hope for boosting the income and livelihood of farmers – while protecting the environment.

These five initiatives, funded with around 4 million baht, are being tested in Mueang Chang tambon (subdistrict) in Nan. Those that gain a foothold with the tambon’s residents may be employed in other poverty-stricken areas nationwide.

Nan is the 19th poorest province, according to the Office of the National Economic and Social Development in 2018. They eased their way up from being the fifth poorest in 2015, but nearly one in five residents still live under the poverty line.

“People think of climate change with fear and think there are no options,” Somruay, 56, Mueang Chang mayor said. “Well, here are some options.”

Most of Mueang Chang – population 6,000 – subsists on corn monoculture. The pay is little since the corn is sold for cheap animal feed and farmers often encroach onto protected land since corn stalks take up a lot of space. The local mayor, however, believes that new solar-powered water pumps could turn barren mountainsides into rich harvest areas.

Solar-powered pumps have been placed on top of Doi Pokkalong and Doi Pu Parn mountains, where they drew water up from a natural spring in a deep valley up to a mountaintop reservoir. 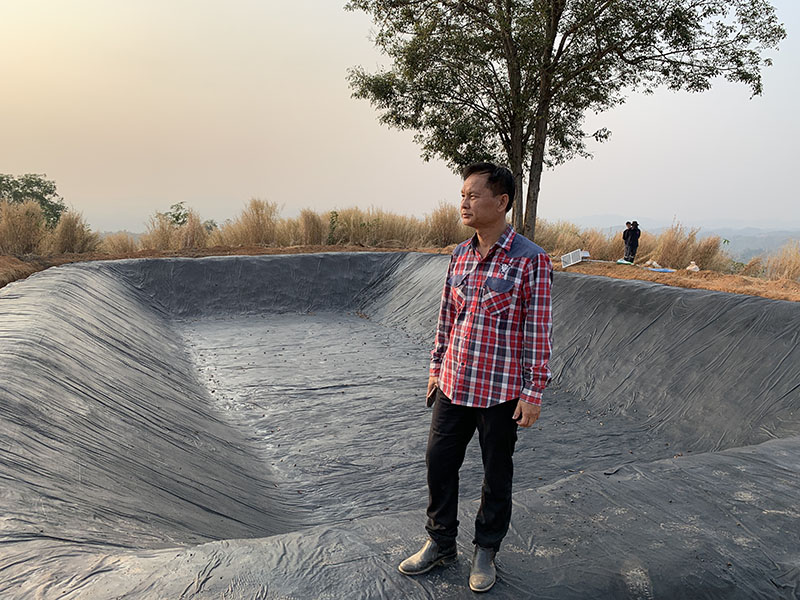 “Nan is a tourist province, so we could grow things like salad greens, mushrooms, even tea or coffee. These crops take up much less space and sell for more,” Somruay Padpon, mayor of Mueang Chang sub-district said. “It’s basically 0 baht to run the pump. If we used an older method, we would have to pay for fuel or get hit with an electricity bill.”

Water stored on high ground can then flow down to surrounding villages as far as 3 kilometers away via a series of pipes, using the free power of gravity. The system can supply water to 1,370 rai of land around Doi Pokkalong, and 700 rai around Doi Pu Parn.

But they are designed to do more than pump up water. Tanaboon Trachoo, 45, the engineer who helped design them said residents will be able to request water from the reservoir via a smartphone app, which tambon officials can approve or reject requests based on the farmer’s previous agricultural yields.

Farmer Sanan Thisara, 60, is already using the pools to water his trees on Doi Pu Parn.

“Now we can grow mango, lychee, and longan. It’s still for a loss, but I hope one day we can start growing crops that sell more like cocoa and coffee,” Sanan said. 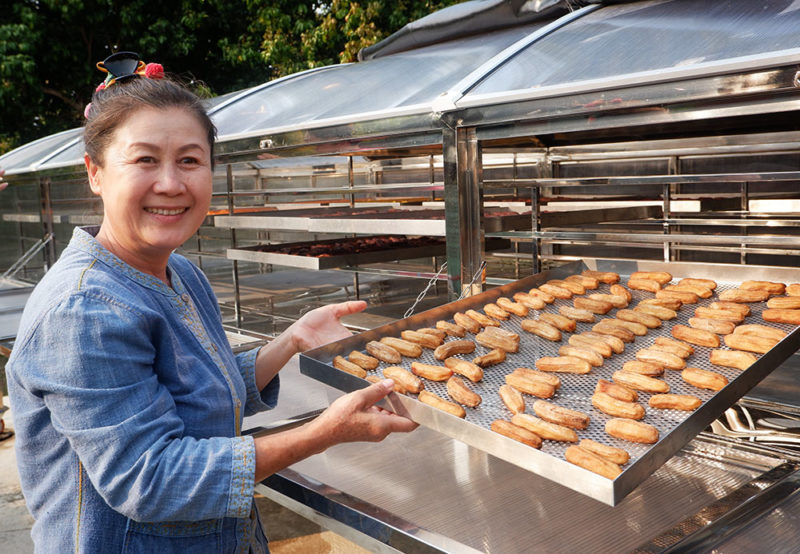 Other innovations by the National Innovation Agency in Mueang Chang are on a smaller scale and serve to provide supplementary income to locals.

Housewives at the Mueang Chang Women’s Learning Center used to make only 2,500 baht to 5,000 baht a month by selling rice crackers, but with the addition of a food dehydrator dome in December, they were able to increase their monthly income to 9,000 baht by also selling solar-dried bananas.

Instead of being exposed to the pollution-ridden atmosphere, the bananas are dehydrated using tech designed especially for the club by Naresuan University. A combination of solar heat, LPG gas, and heated ceramic plates do the magic. The dome cost 350,000 baht.

“Before, we had difficulty drying bananas because they would get contaminated with rain, dust, and bugs,” Kingkarn Pantuwanit, a woman at the learning center said. 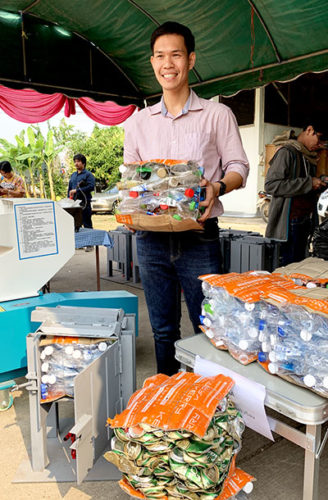 In Mueang Chang’s most far-flung rural areas, garbage trucks might visit once every three months. That’s where the Yaksa-hand powered trash compressor comes in, designed for stay-at-home elderly and children to clean up their neighborhoods while making extra cash.

The innovator, lecturer Pongthorn Wijitkul from Rajabhat Uttaradit University, says a family can make about 6,000 baht per year just by compressing plastic bottles and aluminum cans into 30 by 30 blocks to sell for about five baht each. Machines have already been distributed to 14 areas in the tambon, as well as some districts in Uttaradit.

Warayuth Wuthi, a social development worker, said only a handful of the 1,264 registered elderly people in the Mueang Chang can make a living since most of them are confined to their homes. Those who are able to earn income weave handicrafts or grow plants for sale. 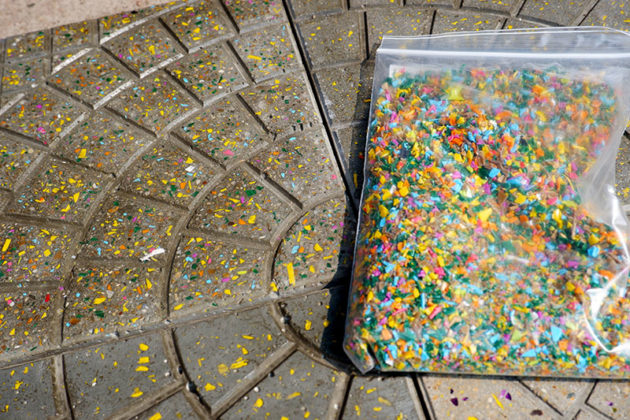 To help combat local waste, the NIA also launched a project to produce cheap concrete blocks using industrial byproducts such as cement dust and plastic waste. Colorful bits of plastic from single-use plastic bottles are embedded into the blocks, which can sell as much as 70 baht per piece.

“The cement dust is cheap; the plastic is cheap. It’s an innovation that does something with the stuff we don’t know what to do with,” Prachum Kumputh, a lecturer at Rajamangala University of Technology Thanyaburi who is spearheading the project said. “These plastic pieces are from a green tea brand. If we sprinkle it on top of a block and sand it, it could look as pretty as marble.”

After a year of introducing the prototype to locals, Prachum says they’re ready to roll out their own production this year. 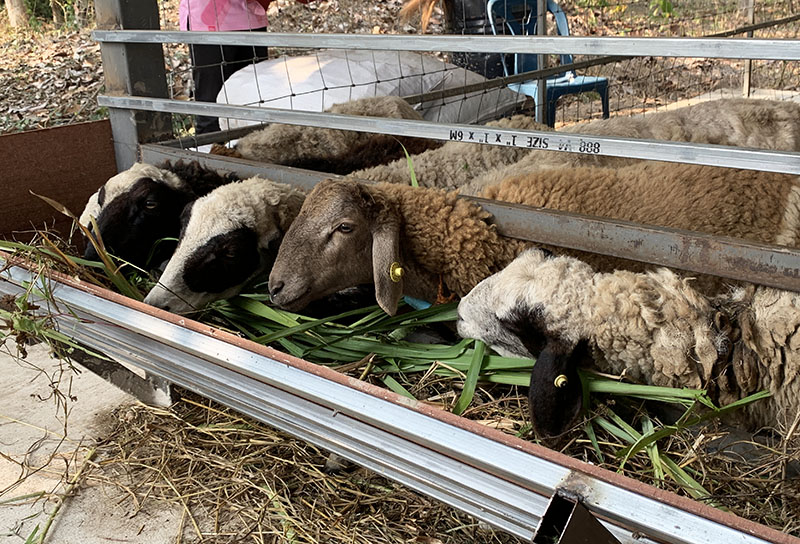 But not all green initiatives are welcomed by locals.

At the Joko Learning Center, experts from Chulalongkorn University failed to convince farmers to convert to a radical, zero-waste way of farming in which microorganisms, instead of pesticides, are used to treat the soil. Under this model, sheep are also set free in orchards to graze and fertilize.

“To convince farmers the change the way they’ve been doing things is for decades is almost impossible, and an academic presentation is not the way to reach them,” Kwanpracha Wangsanit, who works at the center said.

“They say, ‘no way’ when I try to tell them that sheep poo and microorganisms are more effective than chemical fertilizers,” Kwanpracha said. “No way that they could sell a pile of veggies for 100 baht per kilo – instead of a huge pile for 20 baht – if they just switch to selling organic produce.”

Still, the tambon mayor seemed optimistic about the innovations as a whole.

“If it’s cheap and simple to understand, the farmers will use it. They won’t if it’s too academic and complicated. I hope these inventions will put power, rather than fear, into the hands of farmers,” Somruay said.