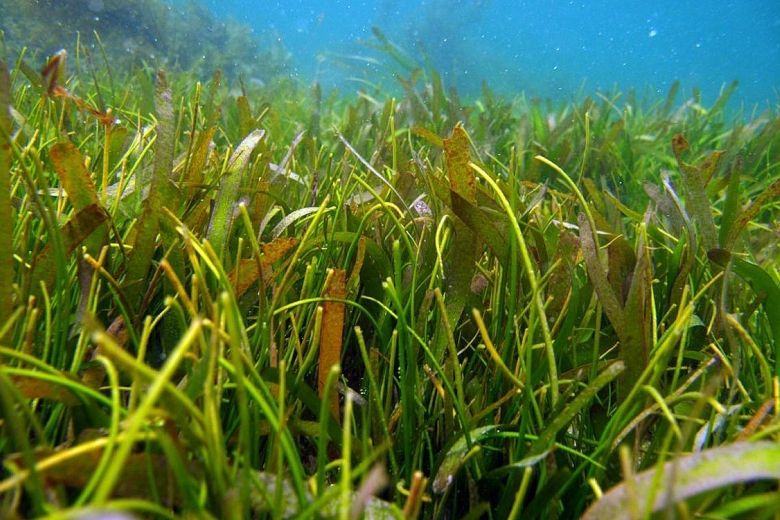 Seagrasses (above) are found in coastal waters all over the world, apart from at the poles.PHOTO: SITI MARYAM YAAKUB

The verdant meadows of the sea are up to 35 times better than rainforests at storing carbon and are nurseries for all manner of marine creatures. Yet, about 40 percent of the world's seagrass may have been lost due to human activity.

Found in coastal waters all over the world, apart from at the poles, seagrasses play a part in mitigating climate change by burying carbon under the seabed for up to thousands of years.

Such carbon, stored in coastal ecosystems like seagrass meadows, is often referred to as blue carbon.

Ms Samantha Lai, a PhD student at the National University of Singapore (NUS) who is studying the resilience and restoration of seagrass in Singapore, said: "At the global level, seagrass conservation efforts consist of monitoring seagrass meadows by student scientists or researchers... restoring areas of degrading meadows by planting seagrass seeds or shoots... and by protecting areas from impact or destruction."

While much of the world's seagrass has been lost, there is a silver lining. Recent research was done by local scientists, including Dr Siti, and Australian collaborators found seagrasses in parts of South-east Asia - including Malaysia, Thailand, Indonesia, and Singapore - to be resilient to natural and man-made stressors.

Dr Siti said: "We found that the meadows in this region are very genetically diverse. This means they are resilient to stressors like climate change, disease and all kinds of anthropogenic stressors (such as land reclamation, which destroys the habitat for seagrasses)."

Their genetic diversity is also good news for the marine life that depends on it, noted Ms Lai.

Were seagrasses to disappear, coastal sediments could erode and this erosion would not only negatively affect environments upland such as mangroves, but also environments further down, such as corals, she pointed out.

If the plants lack such diversity, then people run the risk of a "massive die-out", Dr Siti added.

One question that marine ecologists cannot answer for sure is how much seagrass there is overall, especially in South-east Asia. "There are pockets (of research done) in South-east Asia, where there's a lot of information, but for the vast region, it's a big data gap, a big black hole of no information," Dr Siti said.

To help plug this, more than 200 seagrass researchers, students, and managers from non-profit organizations have gathered in Singapore for the World Seagrass Conference and the 13th International Seagrass Biology Workshop (ISBW) to share their research and engage the public. The meetings, which began on Monday and will end on Sunday, are organized by the DHI Group, the National Parks Board, and NUS.

In line with the theme of translating science into action, there will be a two-hour public talk today at UTown at NUS at 7pm, featuring seagrass researchers from Australia, Malaysia, and Sweden.