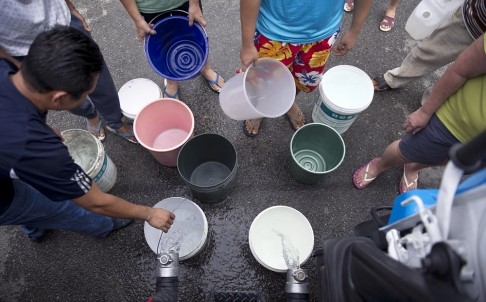 Neighbours experiencing some of the driest weather they have ever seen, raising concerns about the pace of climate change in the region.

Singapore and Malaysia are grappling with some of the driest weather they have ever seen, forcing Singapore to boost supplies of recycled water while its neighbour rations reserves amid disruptions to farming and fisheries.

Singapore, which experiences tropical downpours on most days, suffered its longest dry spell on record between January 13 and February 8 and has had little rain since.

In peninsular Malaysia, 15 areas have not had rainfall in more than 20 days, with some of them dry for more than a month, according to the Malaysian Meteorological Department.

Forecasters say the dry spell is expected to run for another two weeks.

The Indonesian province of Riau has also been hit, with part of the region wreathed in smog, usually caused by farmers setting fires to illegally clear land. Poor visibility has disrupted flights to and from Pekanbaru airport.

Malaysian Prime Minister Najib Razak was due to discuss the drought at a regular cabinet meeting yesterday that would decide whether to declare a national emergency, according to state news agency Bernama.

While some dry weather is expected at this time of year, the abnormal lack of rain is raising concerns about the pace of climate change in the region.

"The concern is that these uncommon weather events may be happening more frequently sooner rather than later," said National University of Singapore weather researcher Winston Chow.

Concerns that dry weather will hurt production have helped push up palm oil prices about 8 per cent in February, setting the market on track for its biggest monthly gain in four months.

The lack of rain is also believed to have caused extensive damage to the rice crop.

In Singapore the dry weather is being blamed in part for the death of fish stocks at several offshore farms. About 160 tonnes of fish have died because of a lack of oxygen in the water.

The Malaysian Fire and Rescue Department said it had received more than 7,000 calls involving forest and bush fires this month, due to the hot weather, five times higher than in the same period last year.

Selangor, Malaysia's richest and most industrialised state, began limited water rationing on Tuesday as levels in its dams plunged to critical lows.

"We pledge that every consumer will receive water, but it will be rationed to ensure supply every two days," Bernama quoted state chief minister Abdul Khalid Ibrahim as saying.

"In a week, consumers will receive water for four days."

The state of Negeri Sembilan near the capital, Kuala Lumpur, declared a "state of crisis" last week as dams fell to critical levels.

In Singapore, the Public Utilities Board has boosted the supply of recycled water and desalinated supplies in order to keep up reservoir levels.

Singapore's national security concerns mean it has developed into a leader in water technology as it tries to cut reliance on imported supplies from Malaysia.

About 55 per cent of Singapore's water is now desalinated or recycled, in line with an aim to be self-sufficient by 2061, when a 1962 agreement to buy 950 million litres per day from Malaysia ends.