The sunny island nation is harnessing the power of the sun to charge the development of its clean energy industry. In the run up to the Asia Clean Energy Summit in October 2017, Eco-Business looks back at the evolution of Singapore’s solar sector over the last decade. 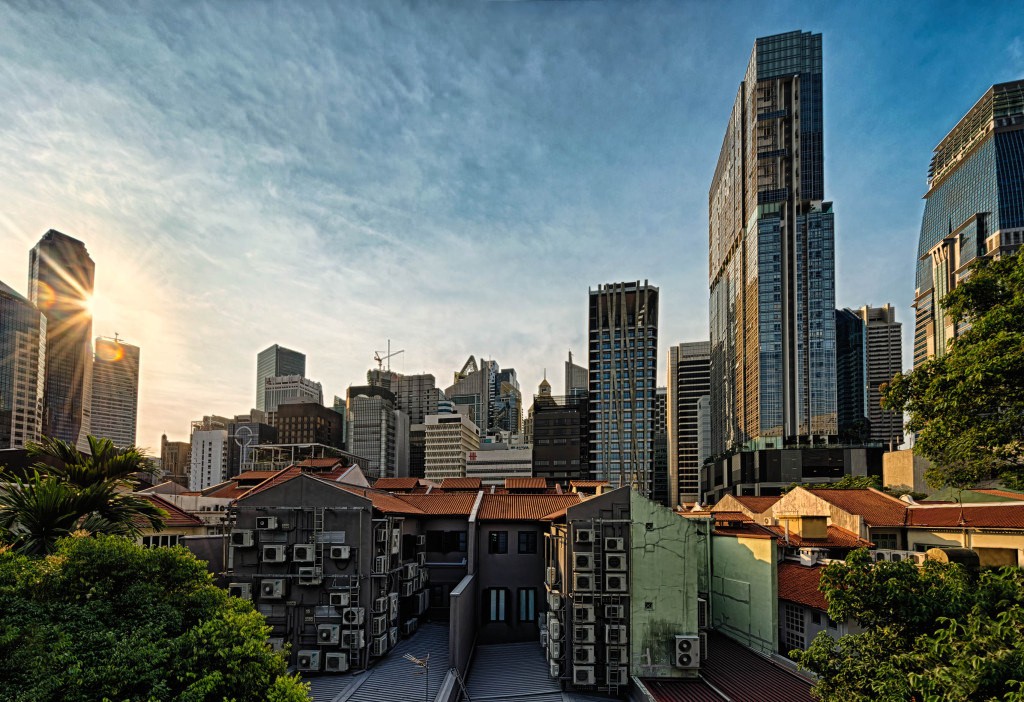 Building facades that can generate electricity from the sun, movable solar systems, and floating solar energy plants—if this sounds like a vision of the future, that’s because it is for space-crunched Singapore.

These innovations form the centerpiece of the island nation’s ongoing push to develop solar technologies suited for cities like Singapore, known as “urban solar”.

The 720 square kilometers city-state has the third-highest population density in the world. The lack of space means that Singapore is left with mainly building rooftops on which to install solar panels, says Goh Chee Kiong, executive director, cleantech and cities, infrastructure & industrial solutions, Economic Development Board, the national agency that helps international and local businesses grow in Singapore.

This is why building-integrated photovoltaics, or BIPV, is a major area of interest for Singapore. EDB recently launched a grant call to invest in research projects that will help turn vertical building facades into solar-energy producing panels, whether as coatings or cladding.

The Solar Energy Research Institute of Singapore (SERIS), a prominent research institute in the Asia Pacific region, is setting up a BIPVcentreof excellence to develop new solutions in this field and raise awareness in the local building and construction community, saysDrThomas Reindl, SERIS’s deputy chief executive officer.

Meeting Singapore’s green building aim to develop positive-energy low-rise buildings, zero-energy medium-rises, and super-low energy high-rise calls for on-site energy generation, he says. After a building has minimised its energy consumption levels through efficiency measures, the rest of the energy used should be offset through renewable energy in order to meet those goals.

BIPV technologies are also critical in retrofitting Singapore’s older buildings. “We have tens of thousands of existing buildings, and if we don’t start adding solar photovoltaic (PV) systems to them, it will be hard to achieve national climate change targets,” says Reindl. SERISis reaching out to potential building industry partners at the moment. 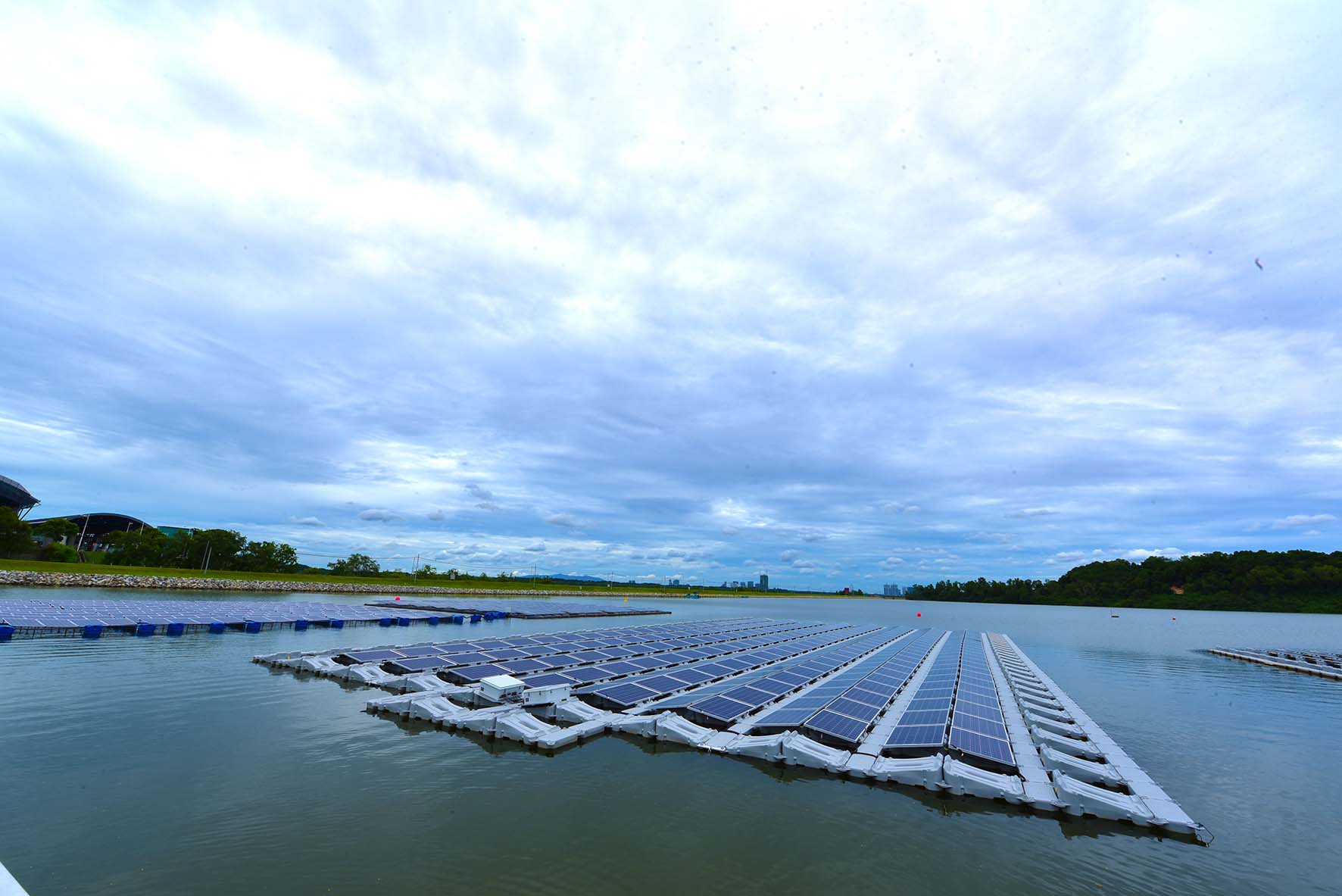 With little land to work with, Singapore is also taking to the water to generate new forms of energy. Last year, SERIS, EDB and national water agency PUB commissioned the world’s largest floating photovoltaic testbed at Tengeh reservoir. The power generated by the testbed could potentially power about 12,500 four-room public housing units, and PUB is currently calling for tenders to examine the impact of large-scale floating solar systems on Singapore’s reservoirs.

“And now, we have extended this effort to studying sea-based floating PV systems, and if realized, we may become the first country in the world to do it on a mass scale,” shares EDB’s Goh.

SERIS’ Reindl tells Eco-Business that offshore power generation could theoretically push the amount of clean energy in Singapore’s energy mix to between 20 to 30 percent, though that would take until 2050.

He comments: “We hope that developers serving projects in Asia will choose to locate here and tap on Singapore’s financing ecosystem, which is one of our strengths.” The government is also encouraging business trusts as another financing mechanism to stimulate the uptake of renewable energy, he adds.

Singapore’s interest in the field of urban solar is first and foremost about serving its needs—but it also represents an economic opportunity. Reindl comments: “We have challenges in our built environment such as space constraints, but if we develop innovative solutions to address these challenges, we’ll be able to export the knowledge to other megacities around the world that also want to move towards a greener energy supply.”

New business models for solar energy production and sales are emerging in Singapore including off-site power purchasing agreements, like tech giant Apple did, and even movable PV systems, like the tender which national real estate developer JTC is calling to maximise land use.

Singapore-based multinational energy producer Sembcorp last year made its first foray into the local solar energy market and purchased two rooftop solar facilities in early 2017. Dennis Chin, senior vice president and head of Sembcorp Utilities, says the company believes that the distributed solar market is “one that is poised to grow further” due to Singapore’s limited space for large-scale solar farms.

“We foresee that the adoption of solar PV systems in Singapore will continue to accelerate in the coming years, which will lead to a more diversified national energy supply portfolio,” he comments, adding that Sembcorp is ramping up activities in the clean energy space.

Julius Tan, chief executive founder of energy retail platform Electrify.sg and former energy researcher, said that increasing public awareness of the benefits of clean energy, and regulation starting in 2018 to allow households to choose their energy suppliers will create bigger demand for clean energy and improve the commercial viability of the sector.

Getting to the cutting-edge of solar technology was a 10-year process for Singapore’s clean energy sector, beginning in 2007. That was when Prime Minister Lee Hsien Loong announced clean energy as a growth area, supported by S$350 million in research investment. Later that same year, major solar technology firm REC Solar decided to locate its solar manufacturing complex in Singapore after evaluating 200 locations globally.

At that time, solar capacity in Singapore was minuscule and there were only about 10 companies in the clean energy space.

But as of middle of this year, Singapore’s solar capacity stood at 136.3 megawatt peak (MWp), a thousand-fold increase over the last 10 years. Industry experts are optimistic that Singapore will meet its goal of 350MWp by 2020, and Singapore’s Minister for Trade and Industry, S Iswaran, announced earlier this year the country’s intentions to achieve 1 gigawatt peak beyond 2020.

The industry in Singapore has grown to about 100 clean energy firms in a decade. The Committee on the Future Economy has also affirmed urban solutions, which includes clean energy, as one of the country’s engines of growth.

The sector has taken off during that time, says Reindl. “Singapore has established itself as a regional hub for solar companies across the value chain, from developers to financing all the way to operation, maintenance, and asset management.”

At the center of this flurry of activity is the government, which played a key role in enabling the growth of cleantech by investing in research, encouraging new business and financial models, and stimulating lead demand, and continues to do so today.

In 2011, it renewed its commitment by injecting a total of S$700 million for R&D into the areas of energy, green buildings, and water.

EDB and public housing agency HDB will launch a third “sizable” tender for PV systems by the end of the year, under the SolarNova initiative that aggregates demand for solar energy from various government agencies, says EDB’s Goh.

Government investments have also led to the formation of public sector research institutions such as SERIS, at the National University of Singapore, and the Energy Research Institute @ Nanyang Technological University (ERI@N).

These initiatives, alongside the country’s open invitation for private companies to testbed their solutions in Singapore’s “living lab”, are attracting further private sector investments and collaboration in the areas of energy management such as microgrids and energy storage.

Referring to small-scale energy generation technologies that can power rural populations, microgrids are almost the opposite of urban solar technology. But the value of microgrid technology lies beyond Singapore’s shores, as Southeast Asia increasingly switches to distributed renewable energy. “There is immense microgrid potential from the 17,000 islands in Indonesia and 7,000 islands in the Philippines,” says Goh.

On homeground, Singapore is already positioning itself for opportunities arising from the global trend of energy systems becoming “decentralized, decarbonized and digitalized” by looking into energy storage and other complementary technologies.

Ensuring continued grid stability is key to integrating large quantities of renewable energy, and Singapore’s Energy Market Authority (EMA) has launched a grant call for solar forecasting technology. Cloud cover affects the amount of solar energy that can be produced, and accurate weather forecasts will give conventional power systems time to react to a projected dip in solar energy output, explains Goh.

Singapore will also soon announce new projects in the area of testing and certification for energy storage, says Goh. How to store energy—and store it safely—is increasingly an interest for countries using cleaner, but more intermittent energy, and the ability to verify these as safe will also be important to convincing building owners to install such systems on their premises.

Electrify.sg’s Tan is optimistic about the prospects for solar energy in particular, but remarks that the low price of conventional power today remains a barrier to the further development of the industry.

The situation for local solar firms is delicate. “Solar power purchasing agreement developers—where companies agree to install solar PV systems at no cost to the customer, but sell the energy generated—can just about making a return on their investment given the depressed electricity prices in Singapore today. Any additional hurdle, whether regulatory or commercial, is likely to tip the economics against these businesses.”

In response, Goh notes that the government does not intervene in electricity prices since they are subject to open market forces, particularly conventional fuel costs. “Ultimately the government will continue to work on the fundamentals to make Singapore competitive, which are investments into research and technology, the ability to raise capital, and focusing on developing and exporting solutions in urban solar and energy management. The future is bright for clean energy and we want to develop this as a national opportunity for Singapore.”