Building a greener Singapore, one byte at a time

The city-state is all-in on its commitment to greening its urban fabric with data, digital technology, smart resource use and environmentally responsible construction.

Much has been made of Singapore’s leafy environment, with foreign visitors to the city-state often describing it as a “garden city” – to the point at which the characterisation has become almost a cliché. In reality, Singapore’s green credentials involve much more than simply being one of the most arboreally well-endowed cities in Asia.

The government set out its ambitious Singapore Green Plan 2030 last year, under which it aimed to green 80 per cent of the city’s buildings by the end of the current decade. A year-and-a-half later, beyond the parks and tree-lined roads, even densely-packed skyscrapers and residential buildings are becoming increasingly important contributors to a sustainable urban environment.

The use of recycled construction materials, optimised energy usage in public apartments, and the repurposing of underutilised spaces as urban farms are just a few ways that a formerly greyer cityscape is being made to turn green. These measures, and others, can be viewed as a four-stranded strategy for greening the buildings in Singapore’s urban landscape. 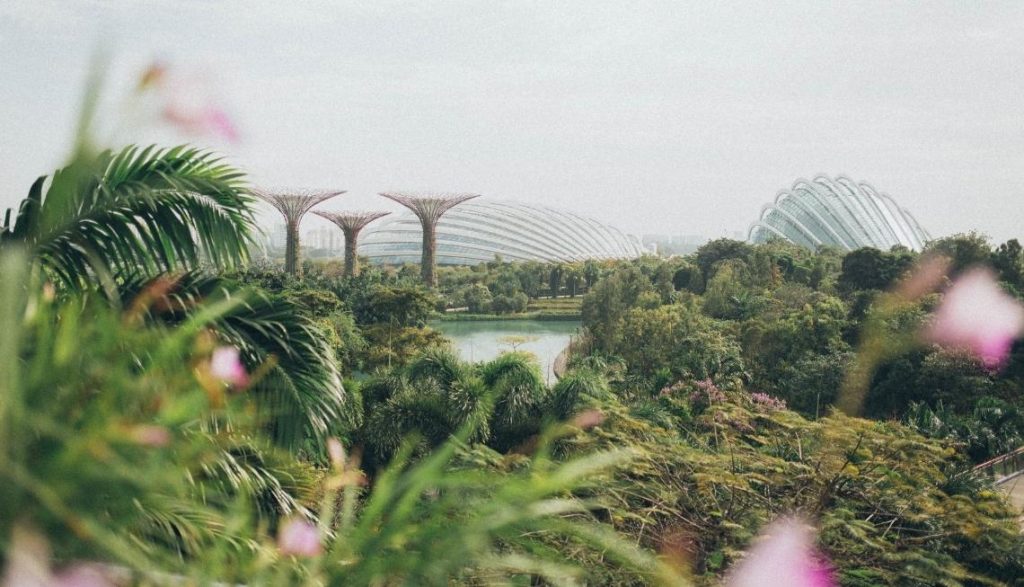 One such initiative has seen sustainable development agency JTC Corporation, technology agency GovTech and tech and engineering group ST Engineering develop a means of combining real-time data and management of systems in the district on a single platform. The system, known as the Open Digital Platform (ODP), will operate systems such as building lighting and lift operations in the Punggol Digital District, as GovInsider reported in March.

The Punggol Digital District, located on the northeastern tip of the island, will be Singapore’s first smart district, functioning both as a residential neighbourhood and an innovation hub for digital industries. The ODP will collect data from platforms such as electricity grids to allow building managers to observe power consumption patterns across the district at a glance.

Thanks to its holistic view of all relevant data, the ODP will be able to predict energy demand, helping to optimise consumption. For example, when temperature data indicates cooler weather, the ODP will automatically turn down air-conditioning systems to save energy.

Data collected through the ODP will also be used in a three-dimensional model of the Punggol Digital District. The 3D interface will be interactive, allowing building managers comprehensively to visualise buildings in the district. They will be able to click on specific buildings to view the energy consumption of hardware such as air-conditioning units.

Researchers will also be able to use the 3D model as a digital twin to develop digital and analogue means of making the district more sustainable. For instance, they will be able to test sustainable technology such as smart toilets and waste collection systems using the digital twin first and fine-tune them later.

The Housing Development Board (HDB) is piloting a rainwater catchment and distribution system known as the UrbanWater Harvesting System in two towns. It harvests rainwater for uses such as cleaning common areas and watering plants, saving the equivalent amount of drinking water consumed by more than 85 average-sized households annually.

The HDB is also transforming the top levels of carparks into parks, urban farms and community gardens.

In a move that echoes the ODP, the HDB’s Smart Hub data platform integrates real-time data on HDB estates, such as energy consumption, human traffic and lift usage. The data helps to optimise energy consumption on estates by, for instance, dimming lighting in common areas if motion sensors do not detect human movement.

This integrated platform is critical to building smart towns, enabling engineers to ensure that various parts of the system, such as solar panels and smart waste collection systems, work effectively together.

Through these initiatives, the HDB is aiming to make neighbourhoods more sustainable and liveable by 2030 as part of a scheme known as the Green Towns Programme.

At a granular level, Singapore’s ambitious plan to green districts means greening individual buildings, especially commercial buildings, and a critical component of their success entails ensuring that businesses maintain and operate their buildings in an environmentally-friendly manner.

The Infocomm Media Development Authority (IMDA) has published an online guide that encourages businesses to adopt digital technology and make their buildings more sustainable. Digital systems include smart sensors placed at entrances or exits that can detect how many people are in an area. When no people are present, building managers can reduce lighting and cooling services, cutting energy use – a process that can be automated by integrating artificial intelligence.

Even after buildings have been made more sustainable, Singapore’s urban landscape will continue to grow, so it’s also important that future development does not come at the expense of the environment. With this in mind, the Building and Construction Authority (BCA) is taking steps to ensure that buildings remain sustainable for their entire lifecycle, from construction to demolition.

The BCA is encouraging developers to use sustainable construction materials such as mass-engineered timber (MET), an engineered wood product made from certified sustainably managed forests. Some buildings at Singapore educational institutions, including Eunoia Junior College and the National Technological University, have already been constructed using MET.

In addition, the BCA has introduced a demolition protocol that helps contractors to recover waste materials when knocking down buildings. The materials can later be recycled for other projects, such as the Samwoh Eco-Green Building, in northwestern Singapore, the first building in the country constructed using recycled concrete from construction and demolition waste.

The Samwoh Eco-Green Building opened 12 years ago, more than a decade before the Singapore Green Plan 2030 was unveiled. As implementation of the plan continues apace, the pioneering feat of construction that the Samwoh project produced can be seen as a symbol of the country’s growing sense of the importance of sustainability. And as the environmental challenges and development pressures that Singapore faces intensify, the acute need for greater sustainability will doubtless usher in other such breakthrough achievements in Singapore’s urban development.