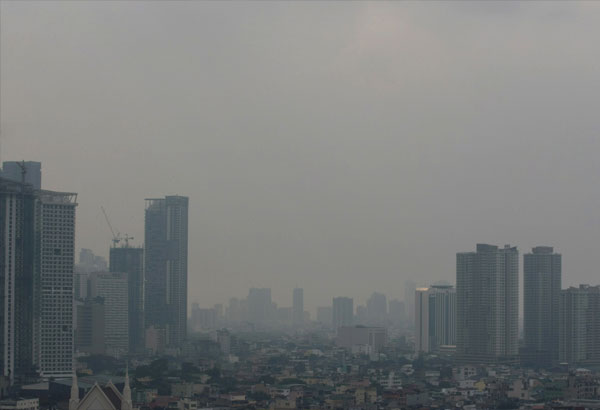 Smog blankets the Makati skyline in a photo taken from Mandaluyong City just after noon yesterday. The Philippines vowed to fulfill its nationally determined contribution to reduce greenhouse gas emissions conditionally following the adoption of a climate change deal in Paris to limit the rise in global temperatures to less than 2˚C. MICHAEL VARCAS

MANILA, Philippines - Malacañang yesterday welcomed the historic agreement to stop global warming, which was signed by nearly 200 countries in Paris on Saturday.

“The Philippines welcomes the Paris agreement as it responds to President Aquino’s call at the start of COP21 (21st Conference of Parties) for all people to act and come to an agreement that allows all voices to be heard and take into consideration the particular situations of all the nations that have taken this historic step to end decades of deadlock and take decisive climate change action,” said Presidential Communications Operations Office Secretary Herminio Coloma Jr.

The Paris agreement aims to keep global temperatures from rising above two degrees Celsius between now and 2100, a key demand of poor countries ravaged by rising sea levels and other effects of climate change.

Coloma said the agreement is seen to address the perennial weather problems of the Philippines, which is visited by at least 20 typhoons a year, and lies on an earthquake belt.

Coloma said Manila bears the “heaviest… most disproportionate share of the burden of climate change in terms of assuring the conveyance of resources that will fully support adaptation and mitigation efforts.”

He gave assurance the Philippines would fulfill its intended nationally determined contribution to reduce greenhouse gas emissions conditionally by 70 percent by 2030 in solidarity with other nations that will provide support in terms of finance, technology and capacity building.

“The government will continually engage our people in the spirit of bayanihan to work together in building disaster resilient communities,” Coloma said.

With the signing of the Paris agreement, French President Francois Hollande welcomed the world to a “low carbon age,” saying France is ready to further cut carbon emissions and increase aid to poor countries.

“In Paris, there have been many revolutions over the centuries. Today it is the most beautiful and the most peaceful revolution that has just been accomplished – a revolution for climate change,” Hollande said.