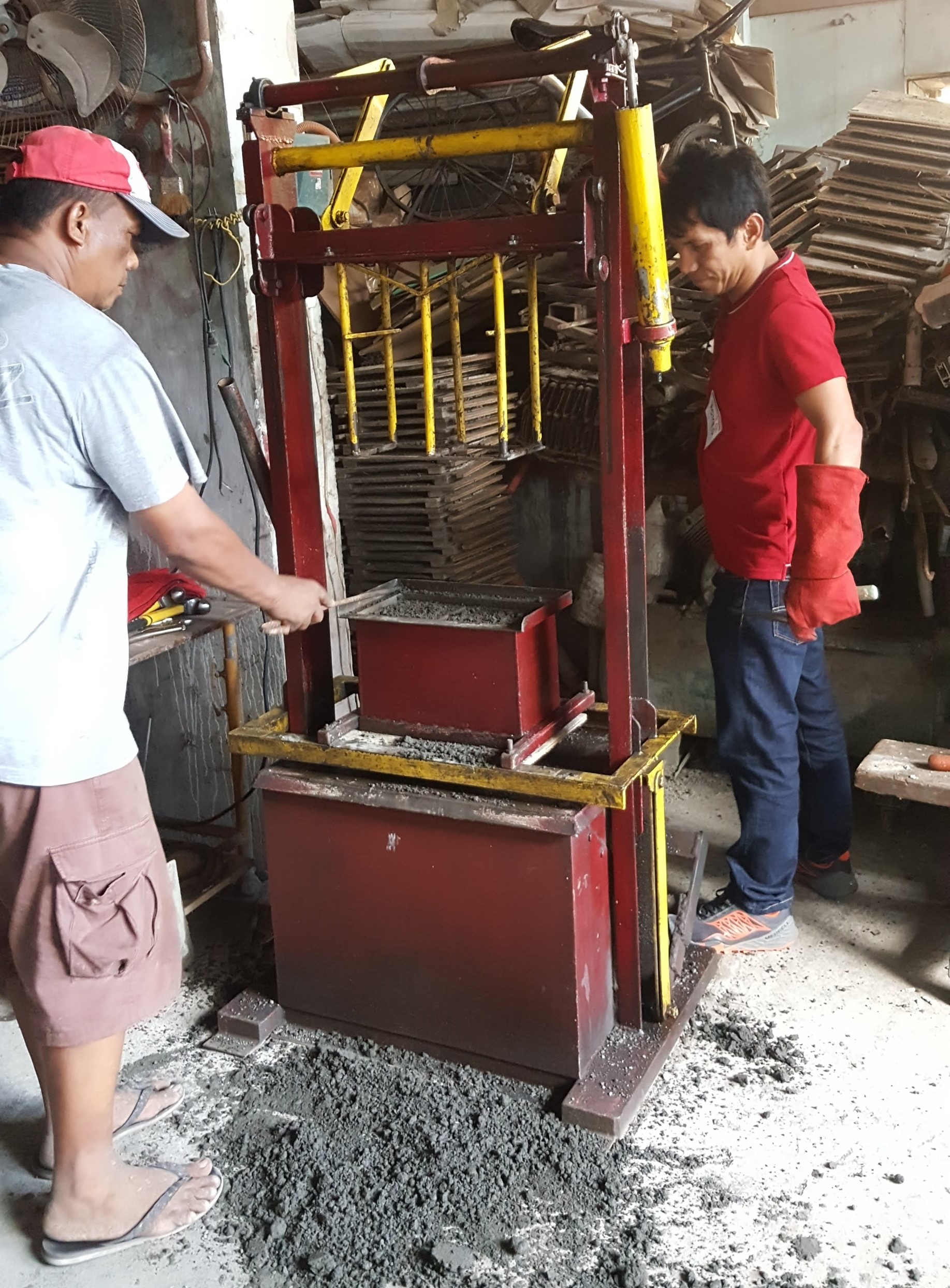 One of the workshop participants tests the ease of use of the multi-blocks vibrating machine developed by BISCAST to create their own hollow blocks.

Naga City– A technology transfer and dissemination training-workshop on the Climate Change Resilient Pilot Housing (CCRPH), led by the Bicol State College of Applied Sciences and Technology (BISCAST) in partnership with the City Government of Naga, was held last 10-11 May 2018.

TheCCRPHis one of the outcomes of the Urban Nexus Project implemented by the GIZ in partnership with United Nations Economic and Social Commission for Asia and the Pacific (UNESCAP) and ICLEI – Local Governments for Sustainability (ICLEI SEAS). The project is funded by the German Federal Ministry for Economic Cooperation and Development (BMZ).

The two-day training was attended by 34 representatives from four private local developers and nine local governments in the Bicol Region namely the cities of Legazpi, Tabaco, Naga, and Masbate; municipalities of Daet, Pili, Sorsogon, and Virac; and Camarines Norte Province. The activity provided practical training on the design and construction of BISCAST’s low-cost housing building system. The BISCAST Nexus team also provided lectures on the integrated resource management, green building and climate resilient features of the CCRPH, as well as hands-on training on the operation of the different machines and processes used to construct the pilot house, including the multi-blocks vibrating machine, vibrating table, and beam fabrication.

In attendance during the opening program was Naga City Mayor John Bongat who delivered his inspirational remarks. He also expressed his gratitude to the GIZ Urban Nexus Team who have made the CCRPH a reality through the provision of technical advisory and to ICLEI SEAS for their unwavering support to both BISCAST and Naga City. BISCAST President, Dr. Richard Cordial, welcomed the participants of the training and shared their goal to provide an overview of the technologies and methodologies used to construct the CCRPH, a low-cost housing design targeting low-income urban dwellers. He explained that if there is interest from the participating local governments and private companies to adopt the CCRPH technologies, BISCAST will provide a more in-depth and a more hands-on technology transfer training. 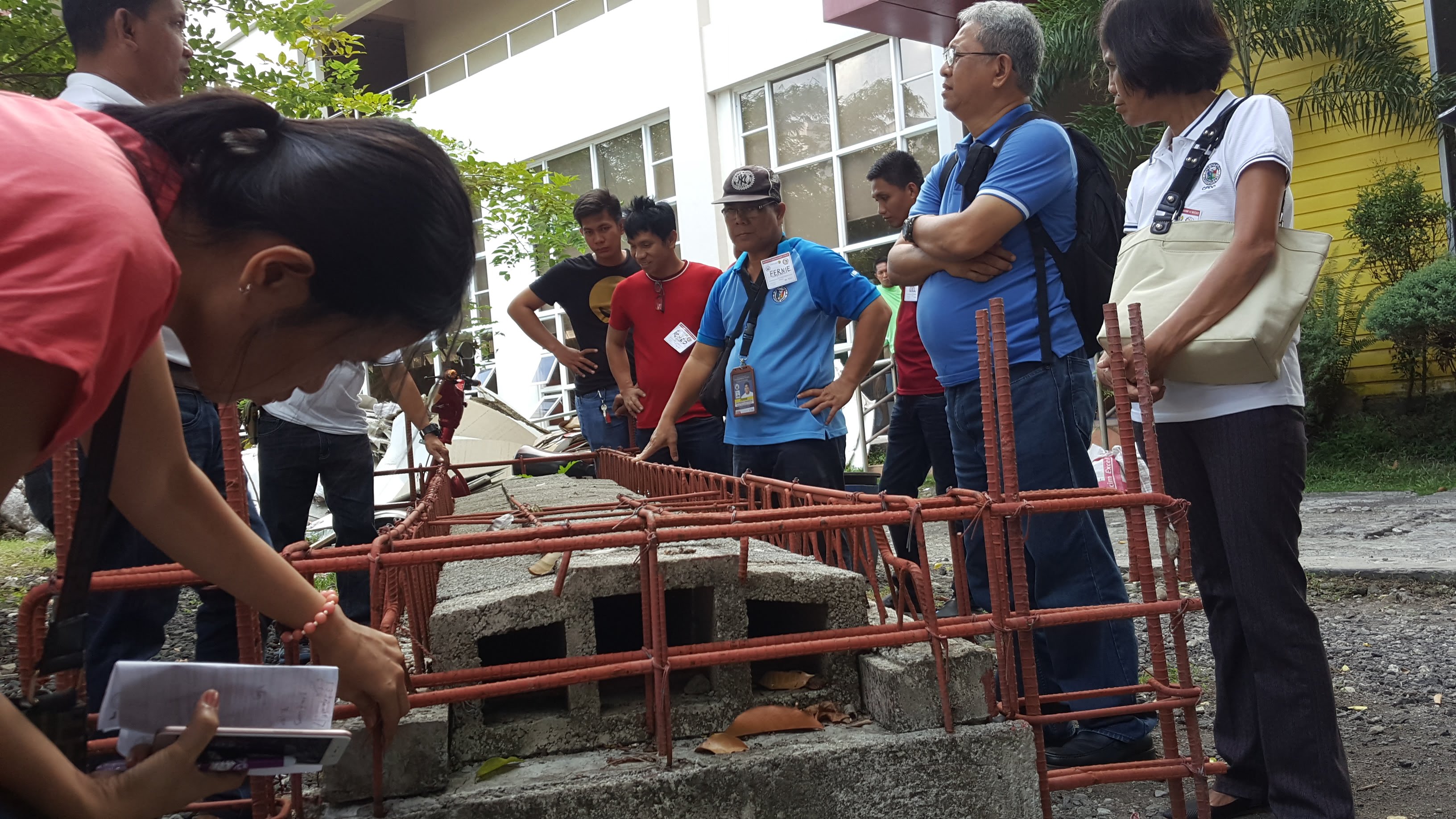 The participants also had the opportunity to observe and test the strength of the assembled beam of slab blocks.

Following its inauguration in 2016, the CCRPH has secured certification from the Accreditation of Innovative Technologies for Housing (AITECH) of the Philippine National Housing Authority (NHA) in December 2017. It also obtained a Kamagong (highest) rating from the Philippine Green Building Initiative (PGBI) which recognized the CCRPH as the second greenest building in the country. Currently, the intellectual property rights for the vibrating machine, precast vibrating table, and four different molders used for the construction of the hollow concrete blocks (HCB) are pending. Despite this, BISCAST President Dr. Cordial assured the participants that the technology transfer will be provided for free to interested parties through a memorandum of agreement.

Currently, BISCAST is organizing a Forum on the Adoption of the Urban Nexus Approach wherein the CCRPHtechnology will be presented at Masbate State College. To further strengthen the promotion of the CCRPH, BISCAST will also present to the Regional Development Council of the National Economic Development Authority (RDC-NEDA) meeting this coming June.