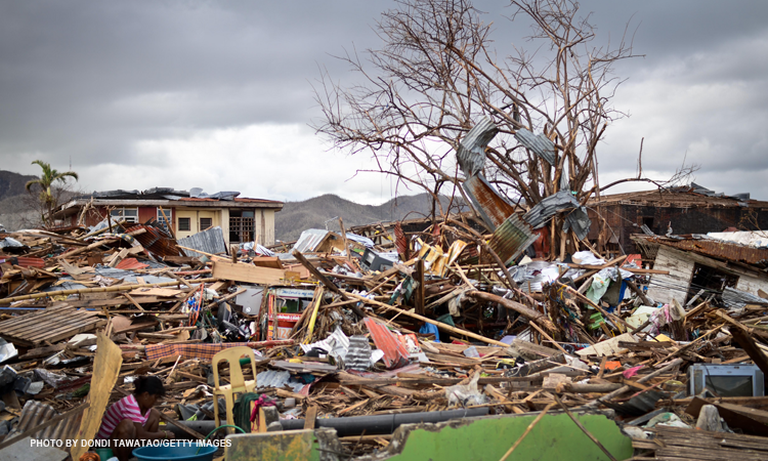 A woman washes clothes amidst rubble and debris on November 20, 2013 in Tacloban, Leyte, Philippines. Typhoon Haiyan, which ripped through the Philippines on November 9, has been described as one of the most powerful typhoons ever to hit land, leaving thousands dead and hundreds of thousands homeless.

Metro Manila (CNN Philippines) — It is a “landmark step,” but the global climate change deal also shortchanges countries most vulnerable to unpredictable and extreme weather brought by warming temperatures, Oxfam said the same day the pact was adopted by world leaders in Paris.

“This deal offers a frayed life-line to the world’s poorest and most vulnerable people,” Oxfam Executive Director Helen Szoke said in a statement released on Saturday (December 12).

The deal was a success, in the sense leaders agreed to restrict average global warming to 2°C above pre-industrial levels — and if possible, limit it further to 1.5°C. Some scientists said that mega droughts, super typhoons, and extreme heat waves, among others, are expected in an Earth warmer by 2°C.

However, many criticized the exclusion of compensation for countries vulnerable to the effects of climate change, despite such having smaller carbon footprints.

Although the deal commits wealthy nations to raise at least $100 billion per year by 2025 to help poorer nations, it does not “force countries to cut emissions fast enough to forestall a climate change catastrophe.”

“This will only ramp up adaptation costs further in the future,” Szoke added.

Right now, experts said that the world is on track for a 3°C rise in the global average temperature. And by “Oxfam’s estimations, the new deal will see developing countries facing adaptation costs of almost $800 billion a year by 2050.”

Under the deal, countries have the responsibility to determine how much they will reduce their respective carbon emissions through a document called the Intended Nationally Determined Contributions (INDC). But the combined INDC commitments are not enough to limit average global warming below the 2°C target.

To reach the 2°C goal, scientists said the world needs to have zero net carbon emissions between 2050 and 2100. The more ambitious goal of 1.5°C requires the world to get off fossil fuels between about 2030 and 2050.

“As the outgoing chair of the Climate-Vulnerable Forum, it helped get more than 100 countries, including Canada and Germany, agree to a more ambitious 1.5 degree target for global warming.”

The Philippines also demanded for the inclusion of women’s and indigenous people’s rights in the binding agreement. But these were not reflected in the accord.

Governments were urged by Oxfam to return to the negotiating table to "strengthen pledges of emissions cuts and agree to new finance level" before 2020, when the new agreement takes effect.

It believes that falling renewable energy prices and the escalating costs of climate change will push countries to make more drastic commitments.