DENR: Striking a balance in the face of climate change 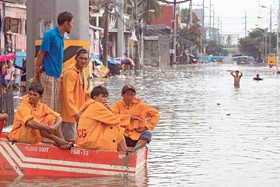 STRIKING a balance between two conflicting managerial jobs, Environment Secretary Ramon J.P. Paje is confident the country will maintain its status as a strong economic performer and achieve its development goals vis-à-vis the worst impacts of climate change.

As Department of Environment and Natural Resources (DENR) chief, Paje said the key to sustainable development and inclusive growth is to exploit the country’s natural resources without necessarily sacrificing the environment.

Paje, whose appointment by President Aquino as secretary of the DENR has been questioned and bypassed for the third time by the powerful Commission on Appointments (CA) early this month, explains the reason for the deferment, which also sums up the three-year performance of the agency, whose main task is to manage the country’s natural wealth.

“The true challenge in this position is actually striking a balance.  That is sustainable development.  We need to balance development and environment,” he told reporters during a year-end news briefing at the Protected Areas and Wildlife Bureau (PAWB) on December 19.

“Since I’ve been here for more than three years, what the CA is evaluating now is my performance and no longer my fitness for the job,” he said.

The DENR chief, who is being linked by some critics to the controversial release of the multibillion-peso Priority Development Assistance Fund scam that was downloaded through the Philippine Forestry Corp., continues to enjoy the trust and confidence of Mr. Aquino.

Some of the policies and reform agenda being pushed by the Aquino administration and the DENR under Paje’s watch can be considered crucial just as they are controversial.

GUIDED by Executive Order 79, President Aquino’s mining policy, the DENR, which is part of the Mining Industry Coordinating Council (MICC), is pushing for a revenue-sharing measure that will increase government share from the exploitation of the country’s mineral wealth, while promoting responsible mining practices with the designation of more areas as “no-go zones” for mining.

Paje earlier revealed that the MICC has submitted a revenue-sharing proposal to the legislative liaison seeking a 10-percent tax from gross profit of mining companies and is pushing for the cancellation of tax holidays and incentives given to mining companies.

Earlier this year, the DENR lifted the suspension on the acceptance and processing of new mining application as part of a review process and a result of the “use it or lose it” policy of the government.  The response of mining companies was dull but the chief of the Mines and Geosciences Bureau views it as a good thing, saying that only serious investors are expected to apply for permit under the new setup, particularly one that requires increased capitalization of mining companies.

Paje remains optimistic that the policy reforms he introduced in the DENR since the second half of 2010 will lead to the sustainable growth and development envisioned by the Aquino administration.

In his PowerPoint presentation highlighting the DENR’s performance, Paje listed some of the major programs and projects of the agency, which include the National Greening Program, Forest Protection and Anti-illegal Logging, Cadastral Survey and Land Management and Disposition, Protected Areas and Biodiversity Conservation, Clean Air, Clean Water and Solid Waste Management, Geo-hazard Assessment and Mapping and Ecosystem Research and Development and Good governance and anti-corruption campaign.

AMONG the major programs being implemented by the DENR is the ambitious National Greening Program (NGP), the flagship reforestation program of the Aquino administration, which aims to plant 1.5 billion trees in 1.5 million hectares of land by 2016.

The DENR is the lead implementing agency of the program, a national convergence initiative jointly being undertaken by the DENR, Department of Agriculture (DA) and Department of Agrarian Reform (DAR).

From January to December 2013, a total of 310,468 hectares have been successfully reforested, overshooting the set goal of 300,000 hectares. The nationwide tree-planting program created 77,617 “green jobs.”

This is the third year that the DENR-DA-DAR joint activities had exceeded its target.

Comparing the Aquino administration’s first three-year accomplishment in terms of reforestation, the DENR chief reported that from 1986 up to 2010, a total of 1.23 million hectares have been reforested by the government.  During the Aquino administration’s first three years, he said a total of 660,789 hectares have been successfully reforested.

Paje said the government is investing heavily on reforestation as part of the government’s climate-change mitigation and adaptation measure.  For 2011 to 2016, the government is eyeing to invest a total of P30 billion, P14 billion of which is for the production of planting materials and P16 billion for the “green jobs” generation.

For that, the 10-year Financial Return of Investment projection of the DENR is P300 billion, or 10 folds that of its actual investment.

More important, the P30-billion investments until 2016 are expected to provide a source of income to upland dwellers, thereby lessening their dependence on the forest’s bounty, as more than half of the billion budget for the NGP will go directly to upland communities.

Logging concessions of 19 companies with forest management agreements with annual allowable cut of 312,579 cubic meters have also been canceled under his watch.

To effectively prevent illegal logging, the DENR also intensified the campaign that led to the confiscation of 24.7 million board feet of illegally cut and transported forest products.  The operations led to the filing of 1,026 cases that had so far resulted in the conviction of 144 illegal loggers.

THE DENR has also successfully completed the forestland boundary delineation of 75 provinces covering about 77,000 kilometers of forested area.

The program complements the land distribution program being implemented by the DAR, another agency whose primary goal and objective is to distribute land to landless farmers through the Comprehensive Agrarian Reform Program.

TO promote biodiversity conservation, the DENR leads the government’s campaign against wildlife trade.

In 2013 it has caused the confiscation and seizure of five thousand kilos of confiscated elephant tusks, which earned commendation from the international community.

The DENR’s PAWB continues to conduct information, education, communication and advocacy to encourage community participation in the protection of wildlife species, including the Philippine Eagle, the Philippine Tamaraw and other species that are unique to the Philippines.

Total suspended particulate level has been reduced by 20 percent over the last three years through the implementation of the anti-smoke belching law, or from the 165 TSP level in January to June 2010 to just 114 in the third quarter of 2013.

Likewise, in partnership with various stakeholders, the DENR reported that of the 19 priority rivers, 12 rivers are already within the standard level based on their classification.

As early as 2011, the DENR has entered into a partnership with various LGUs, private sector, people’s organizations and non-governmental organizations as part of the “adopt a estero” program of the DENR.

To date, a total of 456 memorandum of agreement involving 258 esteros and rivers have been signed.

Complementing the clean water initiative, the National Solid Waste Management Commission also improved solid waste management that led to better environmental quality.  The DENR claimed of achieving a waste-reduction rate of 42 percent from 34 percent in 2011 through the waste reused, recycled and composted in Metro Manila and 38 percent outside Metro Manila.

THE DENR, the agency mandated to manage the country’s environment and natural resources, becomes even more relevant and crucial because of climate change.

The adverse impact of climate change-triggered extreme weather events, with Supertyphoon Yolanda being the worst to hit the country so far, exposes the country’s weakness not only in terms its vulnerabilities but also in terms of disaster response.

Metro Manila is no exception.

It has been the “ground zero” of disastrous floods before, often leaving a path of death and destruction.The impact of climate change to the national economy could no longer be ignored, underscoring the need to enhance the country’s natural defense against calamities and further enhance the country’s resiliency and coping capacity.

As climate experts say, climate change is here and now, and the DENR should not only be on the right path, but should lead the country and move fast enough for the country to sustain whatever little gains and cope with the challenges presented by climate change.