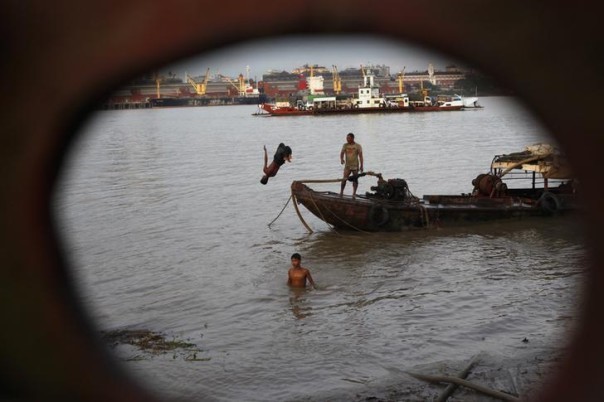 YANGON (Thomson Reuters Foundation) - Myanmar has lost 40 days from its annual monsoon in the past 35 years, leading to severe shortages of water both for consumption and agriculture – but the government has yet to formulate a policy on how to tackle climate change, activists charged Monday.

“We are down from 145 rainy days to 105 days a year. That decrease in rainy days and rainfall has huge implications for the agricultural sector, which involves 70 percent of people this country,” Myint Zaw, an award-winning environmental activist, said on the opening day of an international media conference organised by the Hawaii-based East West Center.

Both the media and policy makers have paid little attention to the larger context of climate change in the changing water and weather situation in Myanmar, he added. That is despite the huge implications for Myanmar’s democratic transition and sustainable development, particularly as climate impacts often disproportionately affect the rural poor.

Climate change “doesn’t seem to be a priority issue for the government as yet,” Myint Zaw told Thomson Reuters Foundation.

“They’re preoccupied with achieving economic progress, but if you are unable to adapt to the changing climate, regardless of however hard you try, poverty eradication is going to be very difficult. That’s for sure,” he added.

“We now have 132 dams (in Myanmar). In 2013, we noticed the water in these dams was only 25 percent (of capacity). This is the sign of climate change, of deterioration of the watersheds,” he said.

As a result of low water levels, the dams were unable to operate properly for either agriculture or electricity production, he said. Despite this, yet more dams are being planned along Myanmar’s waterways, something activists warn could lead to the further degradation of the country’s rivers.

Myanmar is a resource-rich, cash-poor country the size of France and England combined. After suffering half a century of brutal military rule, it embarked on democratic reforms after a quasi-civilian government took power in March 2011.

The country has always relied on the exploitation of its natural resources for income and now that Western sanctions have been suspended or lifted in response to reforms, Myanmar is looking to attract big money from eager foreign investors.

It already sells gas and hydropower to energy-starved neighbours such as Thailand and China while only one out of four Burmese has access to the grid. In rural areas, the number of people with access to grid energy drops to one in six, the Asian Development Bank (ADB) said.

Activists like Aung Myint and Myint Zaw are concerned that infrastructure projects such as dams are being planned with little involvement of local communities and scant concern for the environment.

In September 2011, Presiden Thein Sein suspended the controversial planned $3.6 billion, Chinese-led Myit Sone dam following a public outcry. About 90 percent of the electricity generated from the project was expected to go to China.

Aung Myint said the answer to electrify Myanmar is not big dams but to upgrade and commercialise village electrification systems that are already available. These use renewable energy resources such as biomass, solar and micro-hydro, he said.

“The government is only concerned with expanding the grid which is going to be very expensive and environmentally damaging,” he told Thomson Reuters Foundation.

Myint Zaw asked, “We need investment and to improve our infrastructure … but are we able to (endure) the problems faced by other countries because of their “Growth first, clean up later” approach?”