Ocean lovers are often left out of the bigger environmental discussions and so struggle to see how they can do their part to stop climate change.

But one organization, Sustainable Surf, is committed to changing all that by directly engaging the global surfing community to save and restore threatened mangrove forest ecosystems. Mangroves are five times more effective at sequestering carbon emissions than land-based trees.

“Many people, including most ocean-minded individuals, inherently understand the real value of restoring coastal ecosystems as a way to protect our oceans, and ourselves. But they need an easier and more engaging pathway to get involved, and that’s why we’re launching project SeaTrees,” said Michael Stewart, co-founder of Sustainable Surf.

The ocean-health innovation lab uses surf culture to sell a sustainable lifestyle to an audience all around the world. With SeaTrees, it will provide an online portal to surfers worldwide to calculate and offset their carbon footprint, then become ‘carbon positive’ by funding new mangrove trees.

“The goal is to plant one million trees on behalf of the global surfing community in 2019,” said Stewart, who plans to ride the same wave that advertisers have used for years to sell products using surf culture, celebrities, and events, but to promote conservation rather than consumption.

“Every corporation in the world that you can think of … They all use the imagery of surf and surf culture and coastal ecosystems to sell their products,” he said.

A November 2018 survey by leading surf magazine Stab found that the surfing community considers climate change to be the biggest challenge human’s face.

“The global surfing world is a US$14 billion business, and according to The World Surf League, there are 120 million surf fans out there in the world, so if we can engage 1 percent of them, we can plant one million trees,” said Stewart.

From endangered to endangering

Mangrove trees can store five times the amount of C02 as terrestrial trees and provide a range of other vital functions to protect life below water and on land.

“Mangroves are often underappreciated, but they are in fact super-ecosystems that are critical for food security, coastal protection, water quality, and climate regulation,” said Gabriel Grimsditch, a coastal ecosystem expert at UN Environment.

“Mangrove conservation and restoration are necessary for a healthier coastal environment and a sustainable future for hundreds of millions of people around the world,” he said.

Unfortunately, mangroves are being cleared at an alarming rate, with more than half of the world’s forests lost in the last 50 years. Making mangroves endangered also endangers all life on earth, because when the trees die, they release the carbon stored in coastal sediments.

According to a UN Environment report, emissions resulting from mangrove losses make up nearly one-fifth of global emissions from deforestation, resulting in economic damages of some US$6-42 billion annually.

“If we lose these things, we are not getting them back, and they go from being the most useful carbon sinks in the world to becoming huge carbon emitters because when they’re degraded, the carbon stored in mud is released back into the atmosphere,” said Stewart.

From surfing to offsetting

The first place to benefit from the SeaTrees project is the Thor Heyerdahl Climate Park in Myanmar, a country with almost 4,000 miles of coastline in the Indian Ocean.

“Mangroves are disappearing in Myanmar four times faster than anywhere else in the world,” said Stewart.

Reforestation projects in the park have led to five million new mangrove trees and hundreds of jobs for locals as well as support for thousands of families with living and educational resources.

Since 2015, 3.5 million mangroves have been planted in the park as part of a project led by Worldview International Fund to restore more than 2,000 hectares of degraded coastal forest. 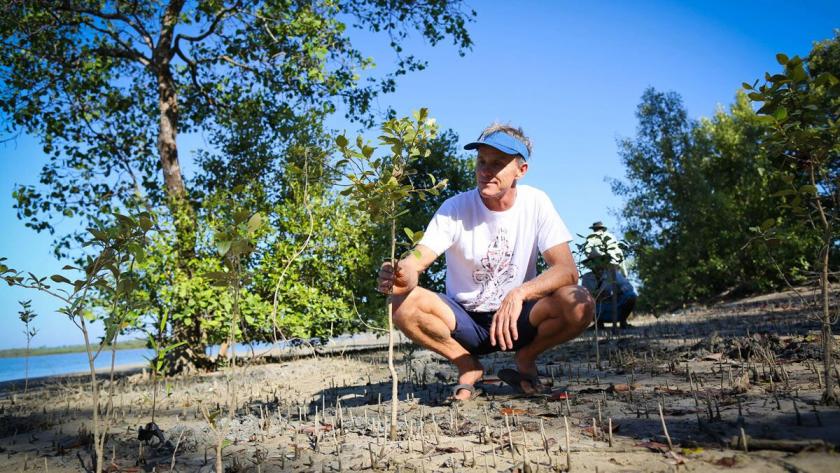 Svein Rasmussen of Starboard, a Sustainable Surf partner, helps plant mangroves. SeaTrees aims to plant one million trees on behalf of the global surfing community in 2019. Photo by Sustainable Surf

The Thor Heyerdhal Climate Park has also driven the use of cutting-edge technology in blue carbon projects. This includes pioneering the use of aerial drones to enable rapid planting at scale in hard-to-access locations, engaging with a web-based transparent mapping platform and using digital blockchain financing to allow individuals to directly support ocean-focused conservation efforts.

This makes it the largest mangrove reforestation project to receive this certification and be able to produce carbon credits for international markets, laying the market foundations for Sustainable Surf’s goal to be achieved.

“What we need to do is to help bring eyeballs and dollars so that this project can grow and fulfill its potential to grow another five million trees. Then, we have a model to hopefully replicate across Myanmar and the region,” said Stewart. 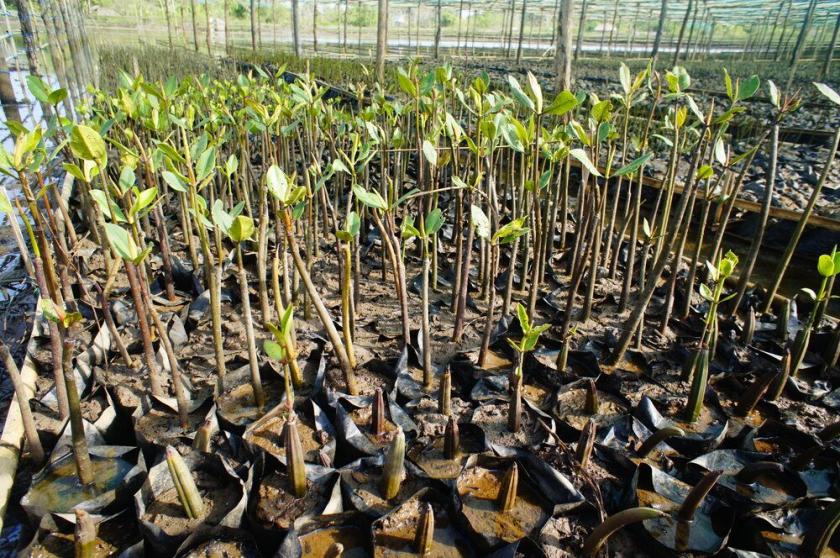 In early 2019, SeaTrees will support an initial planting of trees in the VCS-certified Thor Heyerdahl Climate Park and then launch an interactive online web portal to create a ‘surf forest’.

Blue Carbon projects selected for support on the SeaTrees platform will be chosen based on industry best practices for impact validation and certification, and for their ability to scale up their impact to meet the challenge ahead.

Sustainable Surf is one of many organizations that made its voluntary commitment at the United Nations Ocean Conference in 2017 and has joined a community of ocean action brought together to save life below water by the next event in 2020.

“Now we can actually start not just operating in our silos and with our own projects, but seeing how they overlap and basically making community happen. We are being more than just the sum of our parts,” said Stewart. “That’s what I’m super excited about and thank you to the United Nations for making it happen.”