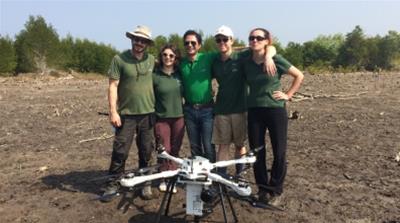 Since 1978, one million hectares of mangroves have been cut down in Myanmar. In the Ayerwaddy Delta in the south, mangrove forests have been significantly depleted - often cut down to make way for shrimp and rice farming, as well as charcoal production and collecting palm oil.

Worldwide, 35 percent of the world's mangroves are now lost.

Only 16 percent of the original cover is left in the vulnerable Delta Region where the mangroves are being destroyed at rates three to five times higher than global deforestation.

"At the moment, mangrove conditions are severely degraded," says Win Meung, a seasoned ecologist who heads a mangrove regeneration project in Myanmar.

"In the coastal areas, 60 percent of the villagers don't have a permanent job and try to find their money in the mangrove areas. They cut the trees and within one hour they can get the money [they need] for their livelihood."

Mangroves play a vital role in the fight against climate change and extreme weather events such as cyclones.

They help mitigate carbon emissions, as well as protect vulnerable coastal communities from the extreme weather while strengthening seafood stocks up to 50 percent.

While Meung and many locals have tried taking matters into their own hands, planting over 400,000 seedlings by hand to try and repopulate the mangrove population, the activity has taken three years and there is a lot more yet to be done before another cyclone hits.

Armed with a drone and the capacity to fire 5,000 seeds an hour, can this new technology be the way forward for Myanmar's mangrove crisis?

earthrise heads to Myanmar to see how both the BioCarbon Engineering drones and local action are coming together to help reforest successfully, restoring a vital natural habitat.