When taps run dry, look in the mirror first before blaming anyone, say experts 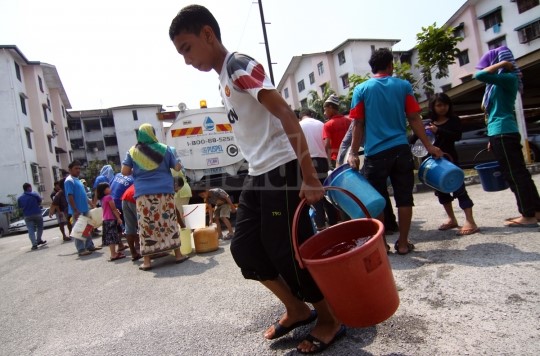 Don’t blame the rain (or the lack of it) or politicians for the severe water disruptions that have hit parts of the Klang valley in recent days because its origins can be traced back to human activity.

According to water industry experts, water disruptions such as the one taking place now  as well as flash floods, are going to be more frequent because of human-induced climate change and Malaysia's unwillingness to adapt to it.

In a nutshell, it does not always rain in rivers that supply raw water to treatment plants which produce drinking water. And when a mammoth downpour occurs, it is too much for the drainage networks to handle, causing flash floods.

The taps running dry in 27,000 households in Hulu Langat and Kuala Langat illustrate this scenario.

When the level of ammonia in a river rises above 1.5 parts per million (ppm), the treatment plant that draws raw water from the river will not process it, said Malaysia Water Association honorary secretary-general Mohamad Asari Daud.

The ammonia comes from effluents or discharge from a sewage treatment that dumps it all into the river, he said.

The more sewage from bathrooms that a sewage treatment plant processes, the more it dumps into rivers, hence more ammonia goes into the water that is treated for drinking.

“Water treatment plants don't remove ammonia from our treated water. But as long as treated water has less than 1.5 ppm, it’s safe enough for domestic use,” said Asari, who is a former district water engineer.

On the flip side, said another water expert Mansor Abdul Ghani, treatment plants have been shut down during the rainy season because river water gets way too clouded or “turbid” from agricultural discharge, landslides or land clearing.

“It is definitely caused by human activity.” said Mansor, when asked to summarise his views on what was behind the recent treatment plant shutdowns that triggered the water shortages.

It was reported that high levels of ammonia caused shutdowns at the Cheras Batu 11 and Bukit Tampoi water treatment plants. This has halted supply to more than 27,000 households in Hulu Langat and Kuala Langat.

As of February 16, the contamination levels of the two treatment plants have been between 4.5 and 4.9 ppm. The maximum level of ammonia permitted is 1.5ppm.

“Which is why we really need to change our habits,” said Mansor, who is also a member of the Malaysian Water Association.

Both Mansor and Asari were met at the Malaysian Power and Water Summit organised by the Asli Strategy and Leadership Institute (Asli) earlier this week.

However, they were sceptical about whether Malaysians and the government were serious about adapting to changing climate patterns and the disruptions and disasters they caused.

This is seen in how Malaysians waste more water than consumers in Indonesia, the Philippines, Thailand and Singapore.

“We pay the lowest rate for water among all those countries which is why we tend to waste so much. And our politicians are too scared to raise the prices because then consumers get angry,” said Asari.

“Just look at the attendance today,” said Mansor of the one-day forum which was held in the midst of yet another water crisis.

The forum gathered some of the most eminent local water experts to talk on issues facing the water industry. By mid-afternoon, barely half of the room was filled with participants.

“It just reflects how serious we are about tackling our water problems,” said Mansor.