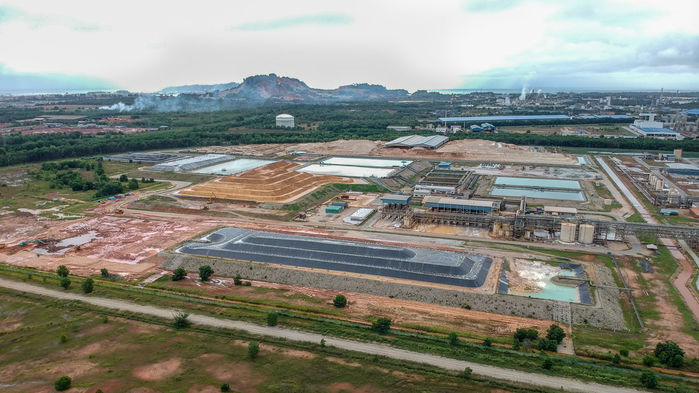 About 30% of the 1.5 million tons of residue stored on Lynas's facility in Malaysia is slightly radioactive and covered with a black lining. SAVE MALAYSIA STOP LYNAS

KUANTAN, MALAYSIA — Companies and governments around the world are anxiously watching the fate of a sprawling industrial facility 30 kilometers north of this city on the east coast of peninsular Malaysia.

The 100-hectare Lynas Advanced Materials Plant (LAMP) produces 10% of the world’s output of rare earth oxides (REOs), minerals needed in technologies including mobile phones, hard drives, fiber optic cables, surgical lasers, and cruise missiles. Lynas, an Australian company, imports concentrated ores from mines on Mount Weld in Australia and refines them here in Malaysia, where costs are lower; it sells REOs—which include cerium compounds, used in catalytic converters, and neodymium, critical to permanent magnets—to Japan, the United States, and other countries. The plant produced almost 18,000 tons of REOs in 2018.

Now, the LAMP faces closure, barely 7 years after it opened. Environmental groups have long opposed the storage on the site of slightly radioactive waste from the extraction process, and they found a sympathetic ear in a new government elected in May 2018. In December 2018, the government demanded that the facility ship its radioactive waste back to Australia if it wants to renew its operating license, which expires on 2 September. On 12 March, a government task force to help organize the shipments was announced. But the company says exporting the more than 451,000 tons of residue by the deadline is “unachievable.”

The standoff has caused Lynas’s stock to lose almost half its value since May 2018 and has worried many countries hungry for REOs. A shutdown would be “a significant event with a ripple effect,” says Ryan Castilloux, a metals and minerals analyst at Adamas Intelligence in Amsterdam. For one thing, the shutdown would strengthen China’s position as the dominant supplier of REOs, which many countries deem a strategic risk. Japan’s electric vehicle industry, for instance, would lose its main supplier of REOs for permanent magnets; “it would have to reestablish a relationship with China after almost a decade of friction” in the REO trade, Castilloux says.

Rare earth elements (REEs) occupy atomic numbers 57 to 71, the “lanthanide series” of the periodic table, and also include scandium and yttrium. Their exceptional magnetic and conductive traits make them critical to clean energy technology, such as hybrid fuel cells, solar panels, and wind turbine magnets. “Although rare earth oxides production worldwide is only worth several billions of dollars, it is essential for industries worth trillions,” Castilloux says.

Rare earth deposits themselves are not scarce—more than 800 are known on land. Refining them takes lots of corrosive chemicals and generates huge amounts of residue. China was long the sole supplier; when it reduced exports in 2010, citing environmental concerns, prices jumped as much as 26-fold and major consumers scrambled for alternate sources. Lynas has become a “flagship” of REO production outside China, Castilloux says. The United States and Myanmar mine REEs as well, but they are processed in China, which today produces about 89% of the global REO output.

But in Malaysia, the waste has raised red flags. At the LAMP, concentrated ores are roasted with sulfuric acid to dissolve the rare earths and then diluted with water in a process called water leach purification, leaving a moist, pastelike residue. By September 2018, the LAMP had already produced 1.5 million tons of residue; because the ores contain thorium and uranium, almost 30% of it is slightly radioactive.

Some REO facilities elsewhere have built permanent, secure facilities to store such waste says Julie Klinger, a geographer, and expert in REO mining at Boston University; others are secretive about what they do with it. In a plan approved by the previous government, Lynas agreed to try to recycle its residues. The company has sponsored Malaysian researchers to find new uses, including products that can improve soil properties.

These efforts have not yielded commercial products, however. And in December 2018, a new executive committee, appointed by Malaysia’s Ministry of Energy, Science, Technology, Environment and Climate Change to evaluate the LAMP, cautioned against using the waste in agriculture because radioactive nuclides might accumulate in the environment. Radiochemist Amran Majid, a retired radiation protection officer at the National University of Malaysia in Bangi, and others have suggested a different strategy—extract the thorium, which accounts for the vast majority of the radioactivity, for use as fuel for nuclear reactors.

So far, the LAMP has been storing residues on site instead, in rapidly growing hills. The imagery of piled up radioactive waste has sparked public fears, which experts say are exaggerated. Workers at the site are exposed to less than 1.05 millisieverts (mSv) per year, Lynas reports, far below the 20-mSv threshold advised by the International Atomic Energy Agency (IAEA) for workers exposed to radiation. The health effects of such low doses are “negligible,” says Kwan Hoong Ng, a medical physicist at the University of Malaya in Kuala Lumpur. People outside the facility are at an even lower risk, Amran adds.

Still, in 2011 and 2014 IAEA found that Lynas lacked adequate plans for a permanent facility if recycling fails. The executive committee has suggested Lynas build one immediately, citing the potential for natural disasters to disperse the residues. (Monsoon storms and floods hit the area 4 months of the year.) Radioactivity isn’t the only risk, says Bun Teet Tan, chair of Save Malaysia Stop Lynas, a nongovernmental organization here. A 2013 review by the Öko-Institute in Darmstadt, Germany, commissioned by Tan’s group, found that heavy metals such as nickel, chromium, lead, and mercury could contaminate groundwater. Despite the new government’s tough language, Tan worries whether “real action would ever be taken,” saying the government has been lax about enforcing regulations at the LAMP in the past.

Neither the ministry nor Lynas responded to interview requests from Science. In a financial report issued in late February, Lynas directors said it has lived up to the terms of its operating license, and that it will build permanent storage if necessary. Exporting the residue should be the last resort, the report says. But the government hasn’t budged.

Saleem Ali, an expert in energy and the environment at University of Delaware in Newark who visited the LAMP in 2014, says the anti-Lynas fervor in Malaysia is “unfortunately a classic case of the not-in-my-backyard syndrome.” He says recycling is a commendable option but worries activists are now “stigmatizing the waste.” Given the importance of REOs for green technology, “The industry needs to make the case more effectively that [it] benefits not just the local, but also the global community,” Ali says.

While the dispute in Malaysia has intensified, REO producers from developed countries are establishing new footholds around the world—in Africa, Central and Southeast Asia, and South America. A Lynas shutdown “might reduce global investment,” says Castilloux, as other investors might fear similar problems, “or it could fast-track other players to fill the gap.” But Klinger says the conflict could yet become an “exciting opportunity” for Lynas to come up with more innovative solutions that could save the plant and become a model for clean REO production. “Lynas could assume a leadership role globally and show other companies how to do the same thing,” she says.

Source: American Association for the Advancement of Science 1 April 2019