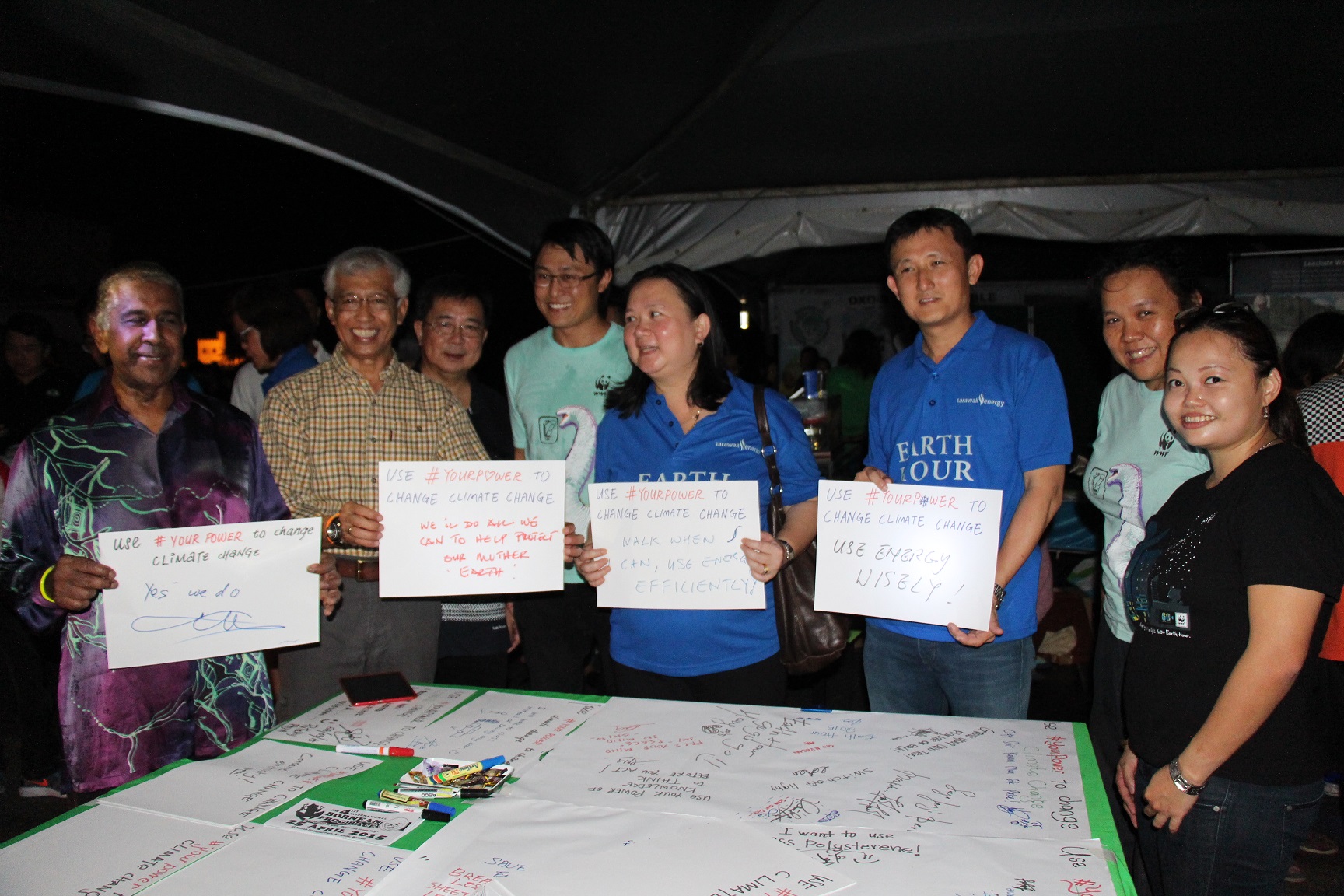 These are some of the pledges which members of the public and prominent public figures made during the recent Earth Hour celebration at Kuching Waterfront, March 28.

The pledges, #Use Your Power To Change Climate Change, are personal commitments made by over 100 individuals to change climate change through everyday actions.

They wrote their pledges when they visited WWF-Malaysia’s booth during a one-day event held by Kuching City North Hall (DBKU) to mark Earth Hour. The climax of the event, the switching off of essential lights in the city, was performed by guest of honour Assistant Minister in the Chief Minister’s Department YB Datuk Daud Abdul Rahman.

WWF-Malaysia Sarawak Programme leader Dr. Jason Hon commended DBKU for successfully holding the Earth Hour event and driving home the message that people hold the power to change climate change. Some of activities organised were aerobathon and exhibition during the day, and fun ride and night walk when essential lights were switched off between 8.30pm and 9.30pm. About 3,000 people from all walks of life took part in these activities throughout the day.

He also commended DBKU for taking the first important step by making two Earth Hour pledges this year, which are: to plant three trees for every tree felled and to go Styrofoam free in all of its events and activities.

“Earth Hour is not just about creating awareness on conserving energy by getting everyone in the world to switch off their light for an hour. It has to go beyond that one hour through our daily actions. Hence the Earth Hour logo is 60+,” he said.

He said the pledges were also in line with DBKU’s efforts in keeping Kuching City Clean, Beautiful and Safe and these would augur well with the city hall’s intention to take part in the Earth Hour City Challenge 2015/2016.

Dr. Hon said Earth Hour, a flagship event by WWF started in 2007 as a lights-off event to raise awareness about climate change. Since then, the event has grown to engage more than 160 countries and territories worldwide.

He thanked the organizer and the public for doing their part in raising awareness about climate change and putting words into actions through individual actions.

“At WWF-Malaysia, we believe in engaging with stakeholders like DBKU and the public as a means to raise environmental awareness and conservation agenda in the country,” he added.