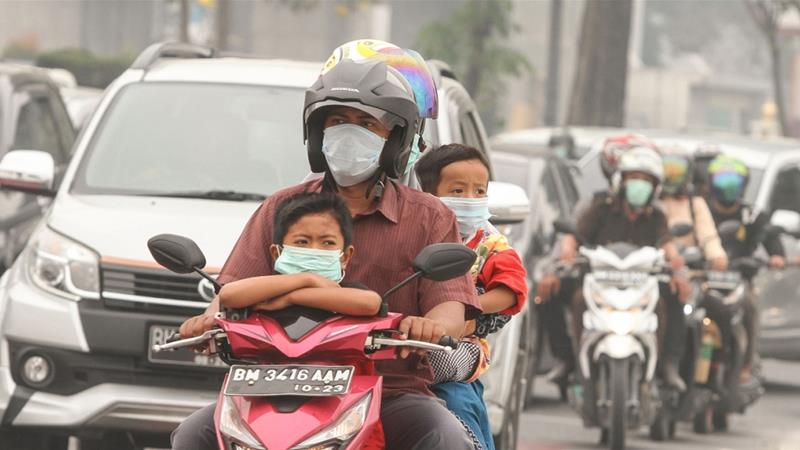 Thousands of schools have been ordered closed across Malaysia and Indonesia on Thursday, affecting at least 1.7 million students, officials said, as toxic haze from rampant forest fires in Indonesia sent air quality plummeting.

Nearly 2,500 schools were ordered to suspend classes in Malaysia - including nearly 300 in the smog-hit capital of Kuala Lumpur - over soaring health concerns sparked by toxic haze from out-of-control blazes in Indonesia's Sumatra and Borneo islands.

In the Malaysian city of Kuching, on Borneo island, the air pollution index recorded levels of 267 as of 06:00 GMT, earning a grade of "Very Unhealthy" and putting it among the most polluted areas in the world, according to the World Air Quality Index. Malaysia's environment ministry also categorizes it as "very unhealthy".

In Indonesia, hundreds of schools in hard-hit Riau province on Sumatra island were also set to close on Thursday - with 800 already closed in one district alone - while about 1,300 were closed in its Central Kalimantan province on Borneo.

The closures affected at least 1.7 million students in Malaysia. It was not clear how many students were forced to stay home in neighboring Indonesia.

Jakarta is deploying thousands of security forces and water-bombing aircraft to tackle the blazes, mostly started by illegal fires set to clear land for plantations.

The fires send smog across Southeast Asia annually, but this year has been the worst since 2015 and has added to concerns about wildfire outbreaks worldwide exacerbating global warming.

Thursday's school shutdown marked the first mass closure in Kuala Lumpur as air quality deteriorated to "unhealthy" or "very unhealthy" levels on an official index in many parts of peninsular Malaysia, to the east of Sumatra, with the capital's skyline was shrouded by dense smog.

Borneo is divided between Indonesia, Malaysia, and Brunei.

A growing number of Malaysians were suffering health problems due to the haze, with authorities saying there had been a sharp increase in outpatients at government hospitals.

Air quality was in the "unhealthy" range across Singapore on Thursday morning, according to the National Environment Agency, as the city state's environment minister called it a "major setback" in the fight against climate change.

"It is regretful that so many lives and livelihoods have been impacted.

"The amount of carbon emissions generated from the fires will present a major setback to the global fight against climate change," he added.

The haze crisis comes as Singapore gears up to host a Formula One motor race on Sunday.

Poor visibility closed several airports in the Indonesian part of Borneo and scores of flights have already been diverted and canceled in the region due to the smog.

Authorities have tried to induce rain through cloud seeding in a bid to extinguish the fires.

But the onset of the rainy season, which usually starts in October, could be the only thing able to douse the blazes.