When members of the Freshwater Fisheries Society (Peniat) in Tanjung Tualang, Perak, found that their fishing areas were invaded by water hyacinth, which caused a drop in the number of catches two years ago, they knew they needed help to curb the deteriorating quality of the lake ecosystem.

They approached Universiti Putra Malaysia’s (UPM) Faculty of Environmental Studies to help them deal with the problem.

The problem was relevant to the faculty not only because it was an environmental concern, but it was specifically within the faculty’s research niche, which included the fields of Environmental Quality and Conservation and Environmental Pollution Control Technology.

The two parties embarked on a collaboration, comprising environmental forensic investigations carried out by the faculty in a long-term programme spearheaded by Faculty of Environmental Studies senior lecturers Dr Nor Rohaizah Jamil and Dr Zufarzaana Zulkeflee. The aim of the initiative was to boost the socio-economic level of the community by conserving the environment in a sustainable manner.

Findings from a series of environmental forensic studies carried out since 2016 were later presented to stakeholders of the fisheries areas in December last year.

“Based on the specific request fromPeniat, we at the Faculty of Environmental Studies developed the strategy to investigate the problem, identify the cause of environmental degradation in the area, came out with a comprehensive report and developed an action plan on how to solve the environmental issues,”Zufarzaanasaid.

“From there, the ‘2018 Love Our Lake (LOL)’ programme, the first formal programme conducted in the action plan, was launched to tackle the first three main concerns, namely the eradication of the overpopulated invasive macrophyte (water hyacinth), improvement of water flow through channelisation and cleanup of floatables solid waste.”

The Faculty of Environmental Studies, via its student association, launched the LOL programme, a premier gotong royong programme with the inland fishermen community from February to April recently. The highlight of the event took place from April 2 to 4.

The main sponsor for the corporate social responsibility programme was Ultratrex Machinery Sdn Bhd, which contributed in the operational cost of the lake clean-up and sponsored the use of machineries to remove the water hyacinth covering 200 hectares of the surface of the lake.

About 200 people from the UPM contingent, representatives of various local agencies and community members conducted a post clean-up activity to ensure the total eradication of invasive macrophytes (water hyacinth) to prevent the re-spreading of the weed during the highlight of the programme.

“We, as the coordinator of the programme, managed to involve major stakeholders from government agencies and private companies, as well as individuals, to work together and contribute directly or indirectly towards the programme.

“For example, we got Ultratrex Machinery to sponsor the major cost of harvesting the water hyacinth by supplying us with a weed harvester. We also got the Irrigation and Drainage Department to help us on the issue of channelization and the clean-up of the floatable solid wastes,” said Zufarzaana. Nor Rohaizah said: “This time around, the programme kick-started with the solution to one of the most critical issues faced by the inland fishermen community, i.e. the spread of invasive macrophyte population, which covered more than 90per cent of the surface of the lake.”

“This alien species, which originated from the Amazon, not only disrupted fishing activity and boat navigation in the areas, but also degraded water quality and harmed aquatic ecosystem of the lake as a whole,” she added.

Zufarzaanagave her assurance that programmes to boost inland fishermen community would be carried out continuously in the future to ensure that the lake ecosystem was conserved and fishing activities were uninterrupted for the freshwater fishermen community.

“Besides increasing the competitive advantage of inland fishermen in these areas to ensure a good source of income and standard of living for them, this programme also reduced the amount of the Bottom 40 percent community in Malaysia, especially in rural areas.”

In line with UPM’s motto, “With Knowledge, We Serve”, the team’s next agenda is to empower the inland fishermen.

“After tackling at least three main problems, it is important to educate local fishermen to play their part to maintain lakes for sustainable fishing and monitor the local environment to ensure the quality of the area improves,” saidZufarzaana.

“Thisincludeproducing a module from the comprehensive report we drafted on how the fisherman can self-monitor the water quality, alternative methods of tackling the invasive macrophyte and ways to further improve water circulation.

“Besides that, other relevant information will also be included in the module on the potential of bioaccumulation and biomagnification toxic materials in aquatic organism and its related health risk.

“A series of workshops is planned to introduce the module to the fishermen.

“In the long run, we plan to continue our role as the coordinator between all relevant parties to developed an integrated lake management system among stakeholders and maybe further developed the area into an aquatourism spot.” 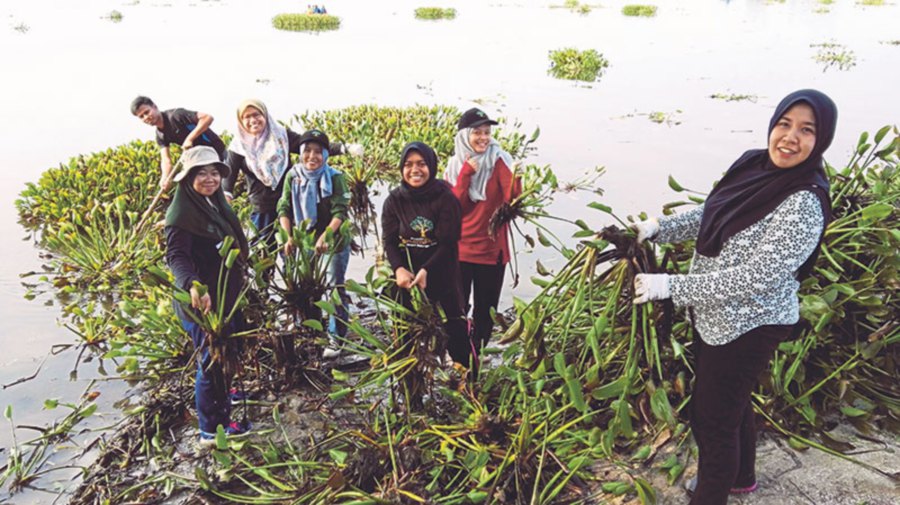 Contingent members manually cleaning up water hyacinths not accessible to the weed harvester.

The LOL programme initiative also proved UPM’s dedication to maintain its position in the UI-GreenMetric World University Ranking at the national and international level, which involved the cultivation of sustainable green policies and management of the environment.

UPM now ranks the first in Malaysia and holds the 27th place in the world according to the 2017 UI-GreenMetric World University Ranking.

“It is important to improve our position to become among the world’s best universities in the UI-GreenMetric World University Ranking and maintain our champion position nationally to show how serious we are in our contribution to combat global environmental problems - e.g climate change, energy and water conservation, waste recycling, and green transportation,” said Zufarzaana.

“We hope to set a good example by putting eco-friendly policies in place to inspire behavioral change among our own academic community, the supporting staff and especially the students, who will eventually be the ones to inherit the earth from us, to ensure environmental sustainability.”