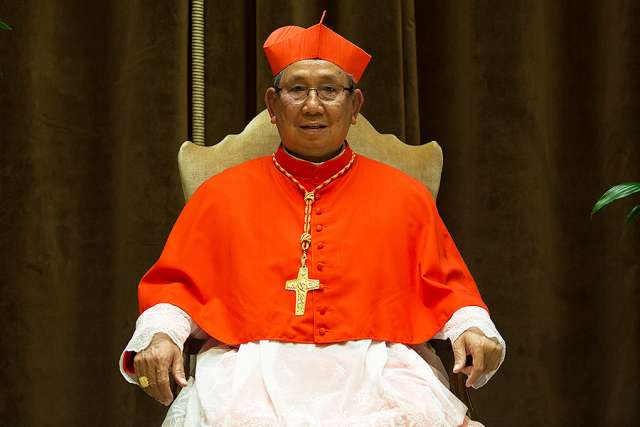 Pakse, Laos - When selecting new cardinals, Pope Francis has often sought to go to the “peripheries” of the Church, which is particularly notable in his elevation of Cardinal Louis-Marie Ling Mangkhanekhoun of Paksé.

Cardinal Ling's local Church is an apostolic vicariate in Laos, a communist country of southeast Asia where Catholics make up only about one percent of the population. He is the first cardinal to hail from the nation.

The newly-minted cardinal’s resume includes a number of issues of keen interest for Francis, including evangelization, pastoral aid for the faithful where the Church is persecuted, a use of dialogue in diplomatic relations, and a concern for the environment.

Born in Laos in 1944, Cardinal Ling attend a seminary of the Voluntas Dei Institute (associated with the Oblates of Mary Immaculate) in Canada, and was ordained a priest of the Vicariate Apostolic of Vientiane in 1972, three years before the communist takeover of the country.

He was appointed vicar apostolic of Paksé in 2000, and consecrated a bishop the following year. He was elevated to the cardinalate June 28.

Cardinal Ling’s ministry in the majority-Buddhist country has been greatly varied as he has responded to the unique challenges facing the Church and the people there. Catholics number just over a mere 45,000 in the country of 7 million, and are served by only 33 priests.

“We are in the minority as Catholics, but we understand each other always; whether you are a cardinal or not, you are the same, you have to be simple and really with the people,” he told CNA.

Given such a small Catholic population, Cardinal Ling, 73, has long placed importance on catechesis and evangelization. Many married missionaries, as well as the country’s seminarians, go into villages to minister to the Catholic flock there. He is also described as placing an emphasis on integrating Christianity into the local culture in order to promote harmony with the religious majority of the country.

The communist takeover in 1975 posed a great challenge for the Church in Laos, which, anticipating persecution, stopped or scaled back many of its public liturgies and catechetical programs. Foreign missionaries were expelled. However, a surprisingly tolerant government has since allowed for the re-growth of the Church. However, the Church still faces challenges from the powers that be.

“The Church is treated very poorly in Laos – probably the worst in ASEAN (Association of Southeast Asian Nations) save for Brunei,” a “well-place[d] diplomat source” told UCA News in May.

Cardinal Ling is noted for having good relationships with government authorities. Despite challenges, the cardinal holds out hope for the future of his flock. While Laos is one of the few countries lacking full diplomatic relations with the Vatican, progress has been made in the recent past, and the presence of a Laotian in the College of Cardinals will offer a prime opportunity for continued building of these relationships.

Fr. Raphael Tran Xuan Nhan of Vietnam, who has worked in Laos since 2005, described Bishop Ling to UCA News as a “kind, friendly, wise and open-minded man” who is “interested in evangelization work and welcomes all foreign missionaries to his country.” He describes the cardinal's diplomatic approach as “dialogue rather than confrontation.”

The beatification of 17 martyrs from the region, killed by communist forces in the second half of the twentieth century, was yet another sign of warming Church-state relations, as well as providing a sense of renewal for local Catholics.

The new cardinal has also spoken out of concern for the environment, responding to fast-paced deforestation in the region.

“Now we are starting to destroy ourselves,” he said, as reported by UCA News. “It’s not from climate change itself but [it is] coming from human beings and humans doing something very wrong to destroy the earth.”

The elevation of Ling to the College of Cardinals represents a peripheral perspective from a long-time pastor with broad experience in many of the challenges facing the Church today.