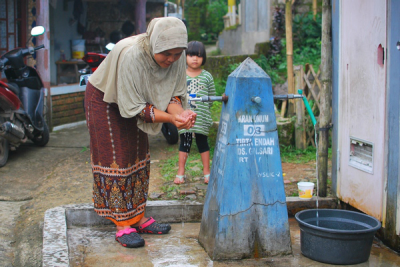 Bogor, Indonesia, March 21, 2014 – About one year ago, Mimin, a mother of two, had to take turns with her husband to fetch water for washing and bathing from a stream near their house. For cooking and drinking they used water from a well.

"But water from the well smells and it's tiresome to fetch water every day from the stream," said Mimin. "My family now uses piped water. The water is clean and affordable. It has made life much easier," she said.

Mimin's family and many households in Gunung Sari Village, West Java, now have better access to clean water with support from the World Bank’s Water Supply and Sanitation for Low-Income Communities project, which was jointly managed by the Water and Sanitation Program.

Under the project, the village received grants to distribute water from springs in the mountains to the village. The community then established a unit to manage access to the piped water.

When the project started in 2008, the village only had 47 water connections for social facilities, such as schools and mosques, and 10 public taps.

“After people realized the benefits, the pattern of consumers has now changed,” said Adang Wahidin, Head of the village management unit. “Connections for social facilities and public taps have dropped, while more people want direct house connections. We now have 624 house connections from none at all.”

The benefits of piped water include a lower cost for consumers.

“I used to pay Rp 60,000 ($5.5) each month buying water from sellers in our village. Now I only pay half of it and the water is better,” said Teti from the neighboring village of Sukamanah.

From the neighboring village of Sukamanah, better access to clean water has helped the village improve sanitation conditions. One of the requirements that has been agreed by the community is that new house connections must have a septic tank. More indoor toilets have greatly reduced open defecation, helping improve the community’s health.

“I’ve noticed that there are fewer cases of diarrhea and skin disease in our village. I can say that it’s because many of us use cleaner water for cooking and bathing, including my children,” said Icha who has used piped water for two years.

The project’s participatory approach was key in making it work in the long term. For example, village heads were required to obtain broad community agreement before they can apply to participate in the project.

Planning was then undertaken by the communities themselves, supported by trained facilitators. Cost sharing promoted local control and ownership, which translated into a higher willingness to collect fees for operation and management. Training was also provided to improve skills in management, finance, and technical issues to help the community sustain the program.

The monthly fee ensured that operation cost could be met, with extra funds available.

“Initially village cadres had to visit people’s houses to collect the monthly fee. Now 80 percent of the consumers come to pay themselves,” explained Adang Wahidin.

With good management, the village has used the extra funds to help the village, such as contributing to the village development budget, establishing a co-op for women, and purchasing a car for emergency purposes.

“We now plan to expand our service,” said Adang proudly. “There are around 100 households that want to have a new house connection. Unfortunately we cannot install them at the moment due to the lack of water supply. But we plan to use some extra funds to purchase plots of land with more springs to increase the number of households we can serve.”

The project’s approach, which was implemented in six provinces, has now been replicated at a national scale under the Pamsimas program.

Indonesia plans to achieve universal access to clean water by 2019 but almost half of the population still do not have access.

“A challenge in achieving the target of universal access is optimizing the collaboration between stakeholders in the development of clean water and sanitation infrastructure,” said Eko Widji Purwanto, Head of the Clean Water and Sanitation Sub-Directorate of the National Development Planning Agency. “And the challenge is not only providing facilities for a 100 percent coverage, but also how to make it sustainable.”

Although the challenges are great, the experience from communities in managing facilities and funds is a positive sign for Indonesia to achieve its target.