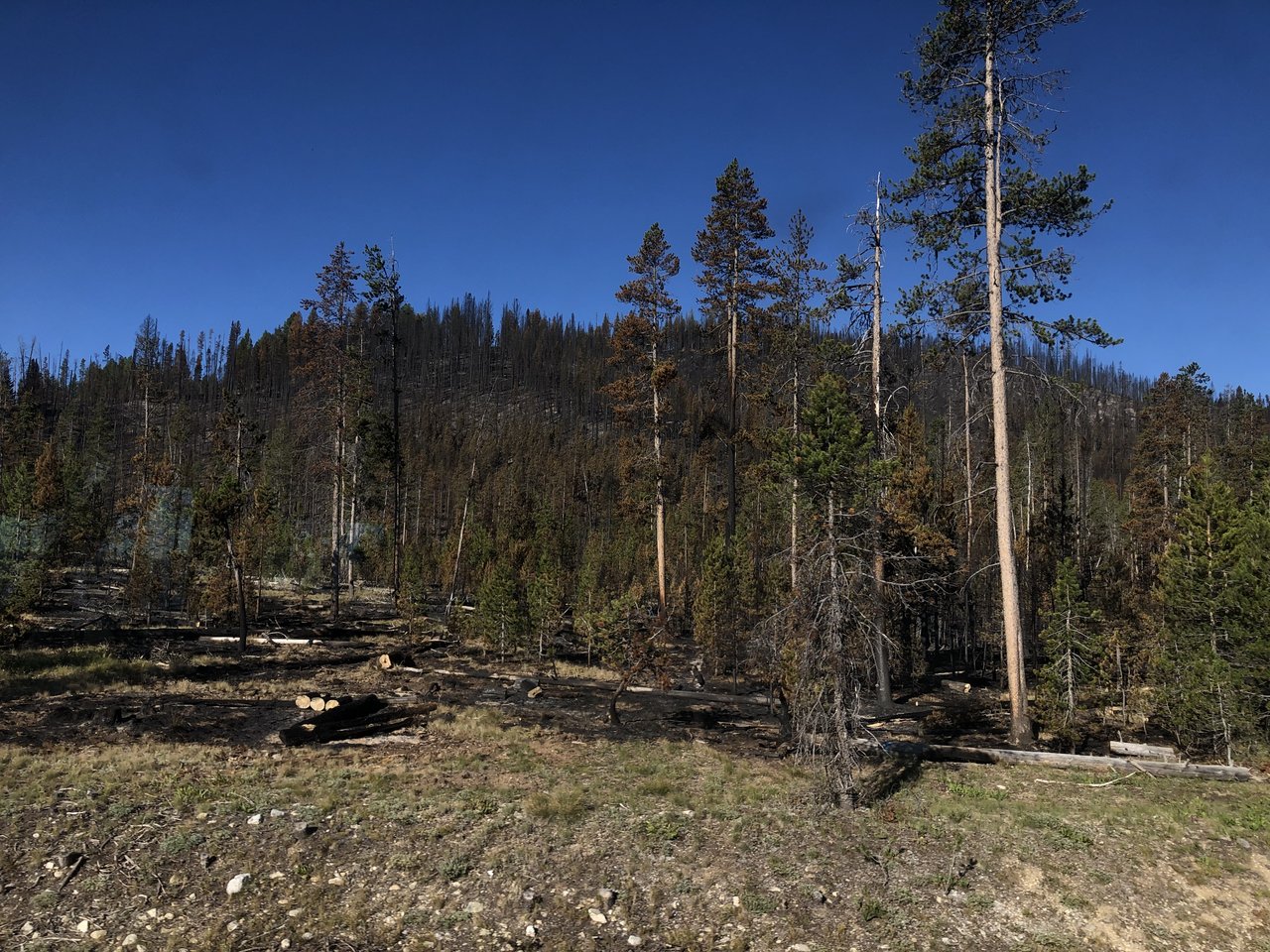 Fires are a natural part of the ecosystem in North American forests. However, their size and intensity is shaped by climate. Credit: NASA

Hot and dry. These are the watchwords for large fires. While every fire needs a spark to ignite and fuel to burn, the hot and dry conditions in the atmosphere determine the likelihood of a fire starting, its intensity and the speed at which it spreads. Over the past several decades, as the world has increasingly warmed, so has its potential to burn.

Since 1880, the world has warmed by 1.9 degrees Fahrenheit (1.09 degrees Celsius), with the five warmest years on record occurring in the last five years. Since the 1980s, the wildfire season has lengthened across a quarter of the world's vegetated surface, and in some places like California, fire has become nearly a year-round risk. The year 2018 was California's worst wildfire season on record, on the heels of a devasting 2017 fire season. In 2019, wildfires have already burned 2.5 million acres in Alaska in an extreme fire season driven by high temperatures, which have also led to massive fires in Siberia.

Whether started naturally or by people, fires worldwide and the resulting smoke emissions and burned areas have been observed by NASA satellites from space for two decades. Combined with data collected and analyzed by scientists and forest managers on the ground, researchers at NASA, other U.S. agencies and universities are beginning to draw into focus the interplay between fires, climate and humans.

"Our ability to track fires in a concerted way over the last 20 years with satellite data has captured large-scale trends, such as increased fire activity, consistent with a warming climate in places like the western U.S., Canada and other parts of Northern Hemisphere forests where fuels are abundant," said Doug Morton, chief of the Biospheric Sciences Laboratory at NASA's Goddard Space Flight Center in Greenbelt, Maryland. "Where warming and drying climate has increased the risk of fires, we’ve seen an increase in burning."

High temperatures and low humidity are two essential factors behind the rise in fire risk and activity, affecting fire behavior from its ignition to its spread. Even before a fire starts, they set the stage, said Jim Randerson, an Earth system scientist at the University of California, Irvine who studies fires both in the field and with satellite data.

He and his colleagues studied the abundance of lightning strikes in the 2015 Alaskan fire season that burned a record 5.1 million acres. Lightning strikes are the main natural cause of fires. The researchers found an unusually high number of lightning strikes occurred, generated by the warmer temperatures that cause the atmosphere to create more convective systems — thunderstorms — which ultimately contributed to more burned area that year.

Hotter and drier conditions also set the stage for human-ignited fires. "In the Western U.S., people are accidentally igniting fires all the time," Randerson said. "But when we have a period of extreme weather, high temperatures, low humidity, then it’s more likely that typical outdoor activity might lead to an accidental fire that quickly gets out of control and becomes a large wildfire."

For example, in 2018 sparks flying from hammering a concrete stake into the ground in 100-degree Fahrenheit heat and sparks from a car's tire rim scraping against the asphalt after a flat tire were the causes of California's devastatingly destructive Ranch and Carr Fires, respectively. These sparks quickly ignited the vegetation that was dried out and made extremely flammable by the same extreme heat and low humidity, which research also shows can contribute to a fire's rapid and uncontrollable spread, Randerson said. The same conditions make it more likely for agricultural fires to get out of control.

A warming world also has another consequence that may be contributing to fire conditions persisting over multiple days where they otherwise might not have in the past: higher nighttime temperatures.

Hot and dry conditions that precede fires can be tempered by rain and moisture circulating in the atmosphere. On time scales of months to years, broader climate patterns move moisture and heat around the planet. Monitoring these systems with satellite observations allows researchers to be able to begin to develop computer models for predicting whether an upcoming fire season in a given region will be light, average or extreme. The most important of these indicators are sea surface temperatures in the Pacific Ocean that govern the El Niño Southern Oscillation (ENSO).

"ENSO is a major driver of fire activity across multiple continents," Randerson said, who along with Morton and other researchers have studied the relationship between El Niño events and fire seasons in South America, Central America, parts of North America, Indonesia, Southeast Asia and equatorial Asia. "The precipitation both before the fire season and during the fire season can be predicted using sea surface temperatures that are measured by NASA and NOAA satellites."

An ongoing project, Randerson said, is to now extend that prediction capability globally to regions that are affected by other ocean-climate temperature changes and indicators.

In studying the long-term trends of fires, human land management is as important to consider as any other factor. Globally, someplace on Earth is always on fire — and most of those fires are set by people, either accidentally in wildlands, or on purpose, for example, to clear land or burn agricultural fields after the harvest to remove crop residues.

But not all fires behave the same way. Their behavior depends on the fuel type and the how people are changing the landscape. While fire activity has gotten worse in northern latitude forests, research conducted by Randerson and Morton has shown that despite climate conditions that favor fires, the number of fires in grassland and savanna ecosystems worldwide are declining, contributing to an overall decline in global burned area. The decline is due to an increased human presence creating new cropland and roads that serve as fire breaks and motivate the local population to fight these smaller fires, Morton said.

"Humans and climate together are really the dual factors that are shaping the fires around the world. It's not one or the other," Randerson said.

Fires impact humans and climate in return. For people, beyond the immediate loss of life and property, smoke is a serious health hazard when small soot particles enter the lungs. Long-term exposure has been linked to higher rates of respiratory and heart problems. Smoke plumes can travel for thousands of miles affecting air quality for people far downwind of the original fire. Fires also pose a threat to local water quality, and the loss of vegetation can lead to erosion and mudslides afterwards, which have been particularly bad in California, Randerson said.

In June and early July 2019, a heat wave in Alaska broke temperature records, as seen in this July 8 air temperature map (left). The corresponding image from the Moderate Resolution Imaging Spectroradiometer (MODIS) instrument on the Aqua satellite on the right shows smoke from lightening-triggered wildfires. Credit: NASA Earth Observatory

For the climate, fires can, directly and indirectly, increase carbon emissions to the atmosphere. While they burn, fires release carbon stored in trees or in the soil. In some places like California or Alaska, additional carbon may be released as the dead trees decompose, a process that may take decades because dead trees will stand like ghosts in the forest, decaying slowly, Morton said. In addition to releasing carbon as they decompose, the dead trees no longer act as a carbon sink by pulling carbon dioxide out of the atmosphere. In some areas like Indonesia, Randerson and his colleagues have found that the radiocarbon age of carbon emissions from peat fires is about 800 years, which is then added to the greenhouse gases in that atmosphere that drive global warming. In Arctic and boreal forest ecosystems, fires burn organic carbon stored in the soils and hasten the melting of permafrost, which release methane, another greenhouse gas, when thawed.

Another area of active research is the mixed effect of particulates, or aerosols, in the atmosphere in regional climates due to fires, Randerson said. Aerosols can be dark like soot, often called black carbon, absorbing heat from sunlight while in the air, and when landing and darkening snow on the ground, accelerating its melt, which affects both local temperatures — raising them since snow reflects sunlight away — and the water cycle. But other aerosol particles can be light-colored, reflecting sunlight and potentially having a cooling effect while they remain in the atmosphere. Whether dark or light, according to Randerson, aerosols from fires may also have an effect on clouds that make it harder for water droplets to form in the tropics, and thus reduce rainfall — and increase drying.

Fires of all types reshape the landscape and the atmosphere in ways that can resonate for decades. Understanding both their immediate and long-term effects requires long-term global data sets that follow fires from their detection to mapping the scale of their burned area, to tracing smoke through the atmosphere and monitoring changes to rainfall patterns.

"As climate warms, we have an increasing frequency of extreme events. It’s critical to monitor and understand extreme fires using satellite data so that we have the tools to successfully manage them in a warmer world," Randerson said.