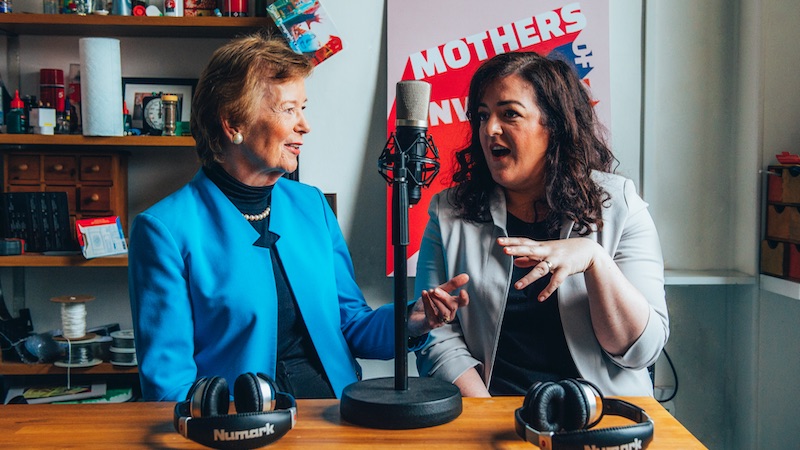 Upon hearing stark numbers on how cows contribute to climate change, comedian and podcast host Maeve Higgins boils the problem down: “We mustn’t let them get their own nation,” she exclaims. “We have to stop them from organizing.”

Her response – to the news that a nation of all the world’s cows would be the third largest greenhouse gas emitter after China and the US – garnered laughs in the recording studio and a jokey rebuke from former Irish president Mary Robinson: “Maeve, we want some intelligent solutions, please.”

It was a moment of levity in a mostly serious discussion of how changing food production and diet can help stem climate change. But it’s with this balance of humor, every (wo)man questions and sober facts that the Mothers of Invention podcast – which launched its second series on Tuesday – helps push feminist climate solutions into the mainstream.

This, advocates say, is what’s needed to help people internalize their role in cutting emissions and build resilience to climate change.

“Climate issues can feel overwhelming to make eye contact with, let alone explore deeper,” said Thimali Kodikara, the Mothers of Invention series producer at the non-profit Doc Society. “The use of Maeve’s warm, relatable and humorous voice immediately dissipates many of these anxieties for our listeners, and makes dense subject matter more approachable.”

The key is to engage people in the serious information they’re receiving – not make light of it, said Pablo Suarez, associate director for research and innovation at the Red Cross Red Crescent Climate Centre.

The center and its partners have designed some 45 games to help people learn about humanitarian issues such as disaster preparedness, food security, and migration. Its players include government officials, volunteers, children, farmers, meteorologists, and climate negotiators. Suarez has given workshops in Vanuatu, Africa, Singapore, at the White House and elsewhere. For example, instead of discussing how people should prepare for a flood, he had them act it out.

“When people are having such a good time, neuroscience demonstrates that what happens is more strongly committed to memory, and the positivity makes it more likely to be embraced when the time comes,” Suarez said.

The idea started when Robinson, now a climate justice advocate and chair of The Elders non-profit, approached Doc Society about making documentaries to help people understand the implications of the Paris climate agreement.

However, the producers saw it wouldn’t work with Robinson as a solo host. A veteran in formal speeches and press conferences, the former president wasn’t familiar with podcasts or their casual, conversational tone. Doc Society considered a long list of co-host candidates from developed and developing countries until they met Higgins, a New York-based Irish comedian.

“It all just worked,” said Search. “You can hear over the series that Maeve has worn her down like a bar of soap, and now Mary is very comfortable in actually relaxing … it was definitely a learning curve for her because it’s so different from, say, speaking at the UN.”

The Climate Justice Resilience Fund (CJRF), which provided a grant to Mothers of Invention, sees humor as way to make the climate change narrative more positive, impactful and solutions-oriented, rather than negative, said Heather McGray, the fund’s director. CJRF supports projects that help communities deal with the impacts of climate change, with a focus on women, youth and indigenous peoples.

“Those hit first by climate change are in a really important position of leadership, as the first to respond and the first adopt,” McGray said. “Instead of calling them the ‘canaries in a coal mine’, we need narratives that help people see how they’re actively creating powerful solutions that others can learn from. I believe humor can help.”