Is it too late to 'stop' climate change in Asia? 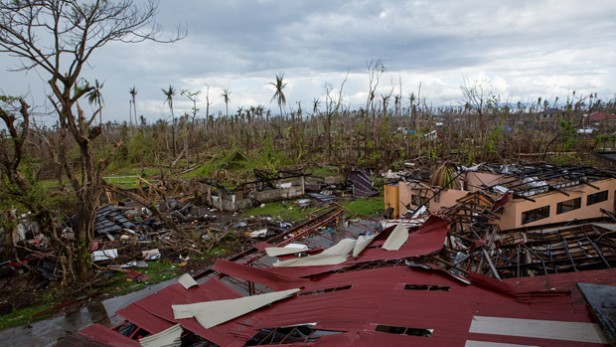 A glimpse of the massive destruction brought about by Typhoon Haiyan, which struck the Philippines in November 2013. Extreme climate events will have an increasing impact on people’s lives across Asia. Photo by: Ben White / CAFOD / CC BY-NC-ND

At this stage in the history of climate change, where the “natural” in natural disasters is no longer just an adjective but has become an attitude — is it still possible for the world, and in particular Asia-Pacific, to “stop” the devastating effects of climate change?

That may be a futile attempt, as the ball has already been set in motion with the only choice left now is “surviving” and lessening these consequences, according to a recent U.N. report on what the devastating effects of climate change will be if actions are not taken immediately.

In the paper released on March 31 by the U.N. Intergovernmental Panel on Climate Change, experts claimed that Asia will likely be subject to warmer weather and extreme temperature fluctuations in the next few years that could not only affect countries’ disaster preparedness plans, but also their general development progress.

“Extreme climate events will have an increasing impact on human health, security, livelihoods, and poverty, with the type and magnitude of impact varying across Asia,” according to the IPCC report, which adds that outbreaks of diseases, food shortages and the overall frequency of natural calamities will be on the rise.

From the flooding in India to the devastation brought by Typhoon Haiyan in the Philippines, evidence of the effects of extreme weather changes in Asia-Pacific are glaring — with the issues of water and energy as well as rapid urbanization exacerbating the situation of the poorest people.

“Water scarcity is expected to be a major challenge ... [and] multiple stresses caused by rapid urbanization, industrialization and economic development will be compounded by climate change,” noted the report.

Although climate change and disaster issues are getting more traction in international development circles, actual results through actions are yet to be seen. In a separate report, the U.N. Office for the Coordination of Humanitarian Affairs said that dealing with humanitarian crises and mitigating risks that come with the former is not a question of “if” but “when” the development community will act and do something about the situation.

“A shift toward a more anticipatory and preventive approach to humanitarian crises is needed. The shift from cure to prevention is ultimately a political challenge,” the OCHA document explained, adding that the responsibility falls on everyone’s shoulders. (Lean Alfred Santos)