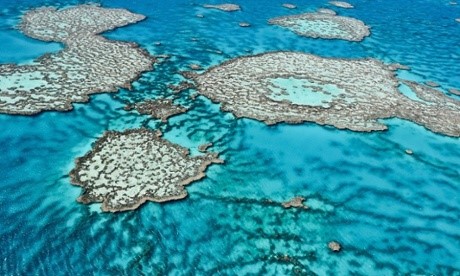 University of Queensland researcher says unless temperature rise is kept below 2C, reef will cease to be coral ecosystem.

The Great Barrier Reef will suffer “irreversible” damage by 2030 unless radical action is taken to lower carbon emissions, a stark new report has warned.

Unless temperatures are kept below the internationally agreed limit of 2C warming on pre-industrial levels, the reef will cease to be a coral-dominated ecosystem, the report warns.

Coral bleaching, which occurs when water becomes too warm and coral’s energy source is decimated, is now a “serious threat” to the reef, having not been documented in the region prior to 1979.

The increase in carbon dioxide pumped into the atmosphere, 90% of which is absorbed by the oceans, has already caused a 30% rise in the hydrogen ions that cause ocean acidification. This process hinders the ability of corals to produce the skeletal building blocks of reefs.

Co-author Ove Hoegh-Guldberg, director of the Global Change Institute at the University of Queensland, told Guardian Australia that current climate trends signal “game over” for the Great Barrier Reef.

“Corals can exist in temperatures 1C higher than the current summer maximum, but beyond that you get coral bleaching and mass mortality,” he said. “Beyond 2C, you don’t really have coral dominated reefs anymore and there’s evidence that 1.5C is beyond the limits too.”

Hoegh-Guldberg’s work has included testing the response of corals to various temperatures at a lab on Heron Island, situated on the Great Barrier Reef. The research has shown that a “business as usual” temperature increase of 4C will prove catastrophic for the reef.

“Even under the best-case scenario of 2C, corals disappear,” he said. “But with business as usual, it’s game over. You look in the tank and the corals have died, bacteria have taken over, the sand has dissolved.

“It’s a very, very poor place. If you were to replicate that on the Great Barrier Reef, it would hardly be worthy of the word ‘great’. It simply won’t be a coral reef.”

The report was compiled by WWF has part of its relaunched Earth Hour initiative. This year’s Earth Hour, to be held on 29 March, will be centered upon the impact of climate change upon the Great Barrier Reef. People will be encouraged to switch their lights off for an hour in support of the reef.

University of Queensland scientist Dr Selina Ward, the report’s other contributor, said that climate change is weakening the reef, making coral less likely to reproduce and more susceptible to disease.

“If we continue as we are, we’ll get more degradation and more bleaching events,” she said. “If we want to save the Great Barrier Reef we need to act immediately and make dramatic reductions in carbon pollution. We need to move away from fossil fuels.”

Hoegh-Guldberg added: “The current administration in Australia is not taking the issue seriously and it’ll cost the people of Australia in the future.

“There isn’t really another option here. If we don’t want global calamity, we need to choose a pathway that decarbonises our society.”

Unesco’s world heritage committee will decide in June whether to place the Great Barrier Reef on its “in danger” list. Conservationists have raised concerns that the vast ecosystem is under threat from coastal development, pollution and dredging, as well as climate change.

A report by the Australian Institute of Marine Science last year revealed that the reef had lost 50% of its coral cover over the past 30 years, with chemical runoff, storms and coral-eating crown-of-thorns starfish the main culprits for the decline.