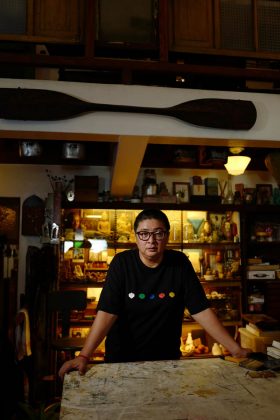 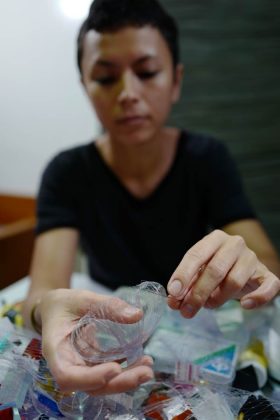 The works of two women artists — Olivia d’Aboville and Ling Quisumbing-Ramilo — converse about the crucial issues concerning our environment: climate change and plastic pollution at this year’s Art Fair Philippines.

Using plastic scraps she sourced from Davao, Ms. D’Aboville’s installation is called Everything, Everywhere, Everyone. With a smiling emoticon, teased BusinessWorld via e-mail: “Can you guess what it’s about? :)”

Since plastic is found everywhere in the Philippines — the country is the third largest contributor to ocean plastic pollution in the world — the artist didn’t have problems sourcing her materials.

“I’ve been collecting plastic packagings that my family consumes and my artisans have also been gathering packagings from their community. The source is endless… But what I’m really excited about is using planks of plastics made from recycled compressed soft plastics such as sando plastic bags, single-use packaging, candy wrappers, and all the soft plastics that never get recycled,” said Ms. D’Aboville.

The plastic planks she’ll be using for her piece for the Art Fair are created by Envirotech Waste Recyling, Inc., a Davao-based company that collects and recycles soft plastics such as sachets, candy wrappers, and food packages. Unlike hard plastics which junk shops buy, soft plastics get discarded easily. The company collects these to create planks for shelters for the people who are displaced after a natural disaster.

Ms. D’Aboville said she’s introduced to the company by Plastic Flamingo, a French NGO. The artist flew to Davao to order planks for her installations and to personally meet the company’s founder.

The Filipina-French artist, who's been advocating smart plastic consumption in her artworks since 2010, said her goal for this year’s exhibit is “to showcase works that would engage on a deeper and more meaningful level than what I have been showing these last few years.”

In Chasm of Fantasies, Ms. D’Aboville’s first solo exhibition in 2010 at the Ayala Museum, she presented the relationship between a capitalist and consumerist society and the inevitable pollution of our seas that is brought about by our buy, buy, buy attitude.

“The outcome of the works made of interlaced and woven plastics was quite poetic, also because of the mise en scene, but for Art Fair, I am going with a more frontal approach, a more literal approach. And I’ll be using discarded plastics in each artwork including two installations. I’m going for more conceptual works for this show,” she said of her past and present works.

A small country, yet one of the biggest plastic polluters in the world, the Philippines, said Ms. d’Aboville, should be ashamed of its environmental offense. “But I think Filipinos are ready to act upon this and find solutions,” she said.

Instead of plastic, Ling Quisumbing’s installation is made of wood but it has the same agenda: awareness.

She will be presenting a bookshelf made from scraps of wood she’s collected over the past decade, mostly leftover pieces of wood from her grandmother’s house that she renovated, and from the constructions and art pieces she’s done over the past 10 years.

“I’ve had this idea brewing for over a year: to create a biblioteque made of old wood from different sources. That’s my starting point,” said Ms. Quisumbing via e-mail.

A tedious process of gathering scrap wood, she said “the history of the fragments are essential to the piece.”

She describes her wood installation as a conversation piece for the environmental and socio-political climate of our society today.

“Each piece has its story, where it came from, where it was used. It requires time. I’m also very specific in the wood I use. They have to be old, scrap wood, and discards. I don’t like cutting long pieces of wood that can still be used. The challenge is to make sense of all these and create a piece from all these unwanted raw materials,” she said.

Her previous and current works are interconnected and have conversations together. For instance, her most recent installation in Taiwan was a large brick structure in the shape of a typhoon formation.

“The idea came about from thinking what was geographically similar with Taiwan and the Philippines: strong typhoons,” she said.

Before that she had her Swell exhibition in West Gallery where she used discarded materials from construction at an old house.

The artist’s role, said Ms. Quisumbing, is to “highlight things that are sometimes overlooked” or to lend a new lens in viewing the world.

Artworks made from scrap aren’t only given new physical purposes to their materials but now serve as platforms for consciousness and conscience.

The works of Ms. D’Aboville and Ms. Quisumbing will be shown during the Art Fair Philippines 2019 at The Link Makati in February, which is National Arts Month.