How dams and climate change are choking Asia's great lake 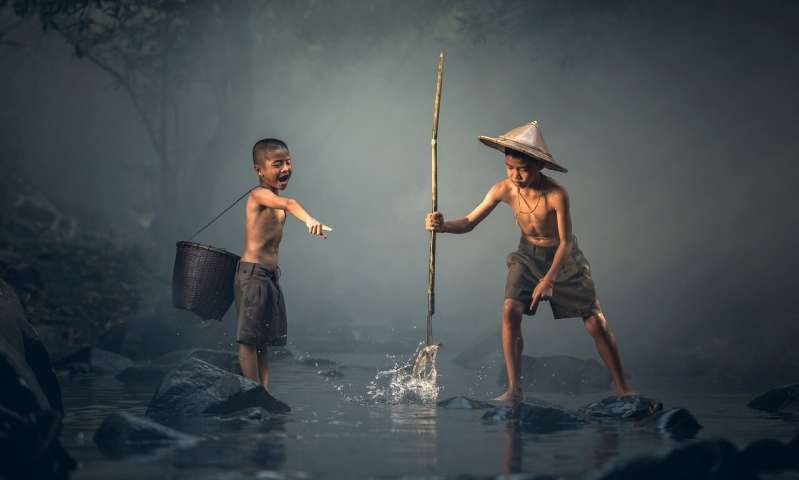 For more than half a century, January meant the prime fishing season for Pang Bin. He took his wooden boat out into Cambodia's largest lake, his catches and their sales sustaining his family for much of the year.

This month, the 75-year-old decided to call it quits, but not because of age or any health concerns.

"No fish," he shrugged. "Just very, very poor. I've never seen a year like this."

Across the Tonle Sap, a vast shallow lake in the heart of this Southeast Asian nation, fishermen are experiencing the least productive season in memory. Years of dam-building and droughts intensified by climate change have upset one of the world's richest freshwater fisheries, carrying potentially severe consequences for millions who rely on the lake for survival.

Fishermen say they are capturing only 10% to 20% of their usual haul, and that the catches are smaller than in past years. Upstream, the waterways that feed the lake recently turned from their familiar caramel hue—rich with nutrients that sustain hundreds of species—to an unsettlingly clear aquamarine due to what experts called "extremely low flows."

Normally, at the start of the year, the banks of the lake are piled high with thousands of tons of silvery, finger-length mud carp, which are mixed with salt to make prahok, a pungent, fermented paste that is an important source of protein in the Cambodian diet. By some estimates, three-quarters of the protein that Cambodia's 16 million people eat comes from the lake.

But the catches were drying up by mid-January, weeks earlier than usual. The price of prahok in nearby markets has doubled to about $3 per pound. That is a substantial increase in a country where the average household has about $200 a month to spend on food, according to official statistics, leaving some families to fret about how they will afford a staple traditionally found in every Cambodian kitchen.

"It's unlikely that there's a protein replacement available for people, or that they have the cash to buy that protein," said Brian Eyler, Southeast Asia program director at the Stimson Center in Washington. "That will have all sorts of knock-on effects and will translate into various human development challenges."

The struggles of the Tonle Sap Lake, or "great lake," reflect a broader crisis in the Mekong River system, the lifeline of Southeast Asia.

The Mekong, which feeds the lake via a tributary called the Tonle Sap river, courses 2,700 miles from China's Tibetan plateau down through Myanmar, Laos, Thailand, Cambodia, and Vietnam, where it waters a vast, rice-growing delta before emptying into the South China Sea. The Mekong basin produces 2.6 million tons of freshwater fish annually and supplies food and livelihoods for an estimated 60 million people.

Last summer, a drought whipped up by warmer Pacific Ocean currents—the phenomenon is known as El Nino—delayed and shortened the annual monsoon rains that nourish the river system. It was the second severe El Nino event since 2016, bolstering scientists' warnings that climate change is making these storms stronger and more frequent.

In July, two months into what is typically the wet season, the depth of the Mekong fell to the lowest levels ever recorded, according to the Mekong River Commission, an intergovernmental agency that advocates for responsible management of the river's resources.

In northern Thailand, the remains of a Buddhist temple that had been submerged for decades after a dam was built reappeared on the sandy riverbed. Rice farmers across the region planted a fraction of their standard crop, finding little water to irrigate their fields.

But the dwindling current wasn't just a result of the weather. July was also the month that engineers in China and Laos carried out tests on two giant hydroelectric dams that sharply reduced the river's flow for several weeks.

Those operations focused attention on the spate of dams being erected along the Mekong and its tributaries as riparian countries seek to harness the river's might to drive economic development.

Over the last three decades, 13 dams have been built along the Mekong's mainstream, 11 in the rocky headwaters of China's Yunnan province. Twelve more are under construction, along with dozens of smaller dams downstream along tributaries in Laos, a poor, landlocked nation whose communist rulers are attempting to sell energy to neighboring countries. Many of the Laotian dams are being financed by Chinese loans.

"We really don't know the effects of all these dams and the ripple effect they will have on such an integrated river system," said Taber Hand, founder of Wetlands Work, a nonprofit environmental group in Cambodia.

Environmental analysts say that as the dams store and release water to produce energy—and as riverbed sand is dredged for construction—they reduce the flow of fish and nutrients, upsetting delicate hydrology that is supercharged by the annual monsoon cycle.

As the storms typically begin in late May, water from the lake flows into the Tonle Sap river and south into the Mekong. The volume of rain soon becomes so great that the Mekong fills up and—unique among the world's rivers—changes course.

Water gushes north back into the lake, along with fish, larvae, organic matter and sediment that produce an explosion of life: an annual fish catch of roughly 500,000 tons, greater than the yield of all the rivers and lakes in North America.

Because of the backflow, the lake rises by as much as 26 feet until the fall, when it starts to drain again, an event that Cambodians mark with a three-day festival of boat races and fireworks. The ecological term for such a cycle is a flood pulse, leading some to label the Tonle Sap the heartbeat of the Mekong region.

"You just have this unbelievable bouillabaisse of production," Hand said. "It's the most productive freshwater lake in the world. But when you screw up the flood pulse, you screw up a very, very complicated, dynamic system."

In good years, the floodwaters stick around for four to five months. Last year, they receded after just six weeks.

In Phat Sanday, a village of blue-painted wooden houseboats at the southern edge of the lake, the local government administrator records the high-water mark every year on the concrete stilts that his office sits on, two stories above the lakebed. The 2019 mark was 10 feet below normal.

"In my lifetime I've seen the water reduce more and more, but in the last 10 years it has become worse," said Heng Mono, the 65-year-old administrator.

"We used to see a lot more water at this time of year. Now it's a lot more land. We have to work twice as long to catch the same amount of fish."

On the porch of her houseboat in Phat Sanday, Heab Nom recalled her childhood on the lake, when she could drop a net in the water and pull up an armload of mud carp, known as trey riel.

But this month her family caught so little that she and her seven siblings had to buy trey riel from other fishermen to make prahok to sell. The family's income for the winter fishing season, which could touch $1,000 a month in a good year, would drop by one-third, she estimated.

"Fish is very important in our cooking, and it's our main source of income because we have no land," the 38-year-old said, leaning over a woodblock and chopping the heads off a small mound of carp.

"We used to keep some of our catches to cook at home, but this year we will just eat less fish."

Cambodian officials are sensitive to the lake's well-being—Prime Minister Hun Sen banned commercial fishing in the Tonle Sap in 2012 to protect fish stocks—but say they have been powerless to stop dam-building by other countries. They are careful not to criticize China, the country's main trading partner and a powerful supporter of the autocratic Hun Sen, who has held power for 35 years.

"A country like us, we are at the bottom of the food chain," said Mey Kalyan, a senior adviser to the Cambodian government's Supreme National Economic Council. "Countries are going to act in their economic self-interest. That is the world now—like it or not."

To surmount its own severe power shortages, Cambodia, too, is turning to hydropower—it has proposed building a 2,600-megawatt dam that would be the largest on the lower Mekong. One environmental watchdog warned that it "would create a complete barrier to migratory fish" and could be "the most destructive dam in the Mekong River basin."

On the lake, families are beginning to glimpse a future with far fewer fish.

At floating health clinics along the southern shore, medical staff said they were seeing more cases of diabetes and hypertension, which some doctors blame on people consuming less fish and more processed foods.

Phat Phalla, an activist with the Fisheries Action Coalition Team, a coalition of Cambodian nongovernmental agencies, sketched a grim outlook: more fishermen migrating abroad for jobs, more mothers and grandmothers raising children, more children dropping out of school to earn money. Her seven adult children have all left to find work far from their village of Chhnok Tru, while she remains at home to care for her seven grandchildren.

"I'm concerned," the 58-year-old said. "We will face more malnutrition and illness. We won't even be able to rely on our traditional food. If it goes on like this, there may come a point where Cambodians won't be able to make prahok anymore."