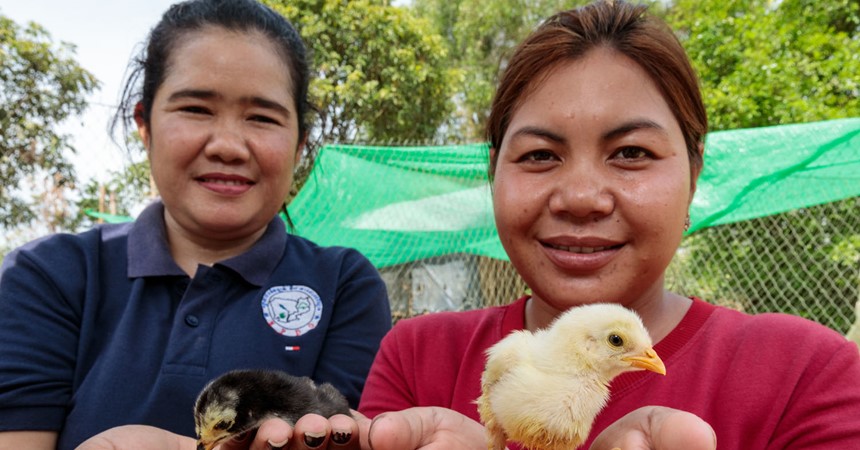 Phany, 27, lives in a village in western Cambodia. Struggling to earn a living as a rice farmer, her family experienced food scarcity and she was forced to leave her young daughter behind to take up construction work in the city.

In Cambodia, where 1 in 8 people live below the poverty line, the search for work can often separate families.

When Phany joined a Caritas supported program, gaining skills in productive farming and irrigation techniques, her life was transformed. Her community learned to work together for better water management, to combat drought and maintain crops year-round. Now Phany is reunited with her daughter because she can make a living in her home village. She now has enough food and income to support her family and send her daughter to school.

Phany lives with her husband and their eight-year-old daughter in a village in Kandieng district in Cambodia’s Pursat province. Every day Phany worked hard in her fields but in recent years, like many others in her village, she noticed the weather was getting hotter and her crops were suffering.

The region experiences recurrent drought and water shortages, making it increasingly difficult to grow enough food or earn a living. The irrigation system in Phany’s village was old and inefficient and didn’t provide enough water for crops.

“We weren’t earning much income, our meals lacked nutrition,” Phany says. “We had no technical skills in vegetable and animal raising, I just farmed in the traditional way. We had a debt with a high-interest rate.”

Over 70 percent of Cambodia's population live in rural communities. Farming families living in poverty are more at risk of food insecurity, and 35 out of every 1000 babies die due to malnutrition.

When Phany’s daughter was two, Phany and her husband had to leave her with family in the village to find construction work in Cambodia’s capital city, Phnom Penh. For five years, Phany worked long hours, carrying heavy lime and bricks. Conditions were dangerous, wages were low, and she was often paid late. But it was the only way she could provide for her daughter.

“I missed my child, I had never separated from her before. She stayed with her grandmother who was also sick,” Phany says, crying. “I used to dream of staying at home raising chickens and growing vegetables.”

In 2016, Phany joined the Upholding Community Dignity Together program, run by Caritas Australia, in partnership with the Environment Protection and Development Organisation (EPDO). Phany learned new farming techniques, such as a drip irrigation system, which enabled her to get a better yield from her vegetable crops and to conserve water for drier periods. She also learned how to grow different vegetables and raise chickens and ducks, just like she’d dreamed. As well as livelihood training, Phany’s community took part in health, nutrition, hygiene and disaster preparedness training. This armed them with better strategies to cope with environmental changes.

“Climate change is a problem, but the community lacked knowledge and had no strategy to deal with it,” says Phlong Sokly, EPDO’s Program Coordinator. “The community now thinks more about water management and adaptation to the change of season… People work better together when they need to mobilize resources for the community’s common good.”

Now Phany grows a wider variety of crops all year-round and is more aware of market needs. As well as rice, she grows cucumber, cabbage, and eggplant, which are expensive items to buy and therefore bring in a better income. The family is now able to afford a small house, they have enough food and clothes and can afford to send their daughter to school. Phany has become a role model for other farmers, and her whole community is benefitting.

“I am proud that I was a farmer who had no skills and now I can earn and improve my living, share my knowledge and also improve solidarity in the family and amongst our neighbors,” Phany says. “I live better than before, I’m not as tired. I can earn and live in the village, I don’t need to go to the city to find a job.”

Around 4700 people have benefitted from the program so far, including nearly 1200 families.

Sokly says Phany is an inspiration to her community. “Phany is a hardworking farmer and even though she faces a lot of challenges, she still keeps moving and learning. She persists, she has transformed herself.”

Phany has achieved a lot since she first joined the program and her future looks even brighter.

“I hope I have enough money to afford my daughter’s education, health treatment and to avoid being in debt,” Phany says. “For my family, I hope to own a plot of land to expand my vegetable and animal raising activity. For the community, I hope we have enough water for all-year-round, to reduce migration to the cities, and that no one is trapped in debt.”

With your help, mothers like Phany can continue to uplift their communities and provide food for their families. They can give the vital support that their children need as they embark on their education. Please donate generously today. Let’s Go Further, Together.