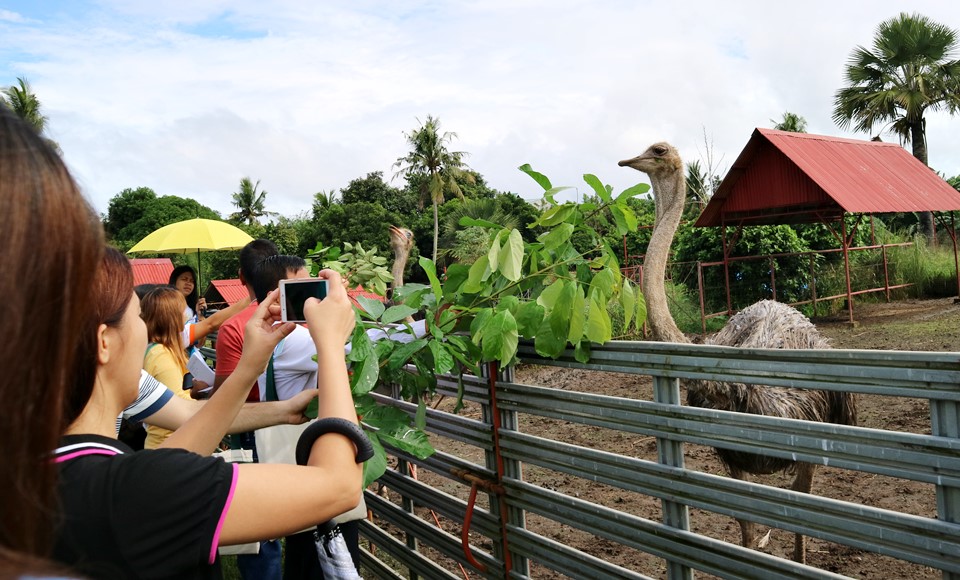 Graco Farms in Pila, Laguna produces cheese from goat's milk, but also grows other kinds of farm animals including this ostrich.

In a seemingly sleepy town of Majayjay in Laguna, Philippines, a busy farm at the foot of the mystical Mt. Banahaw never runs out of activities for sustainable livestock and crop production. Popularly known as the Costales Nature Farms, the farm also lets its visitors experience firsthand the activities in farming such as harvesting, feeding farm animals, transplanting, seed sowing, fishing, and urban gardening, prompting the Department of Tourism (DOT) to give the farm the recognition of being the first farm tourism destination in the Philippines.

Few years later, more farms in the Philippines began to venture into farm tourism as farm owners realized the sector's potential to sustain income that is less dependent on weather, markets, pests, or diseases.

For instance, the Ephrathah Farms in Badiangan, Iloilo also offers their place as venue for events like weddings and birthday celebrations aside from its usual farm production and other tourist accommodation activities. The farm has 8,000-10,000 average monthly visitors. Ephrathah Farms has also conducted training of small farmers in nearby communities to cope with the demand in the food market. From the active farmers that they trained, the Ephrathah Farms agreed on buying the crops that they plant on a very good fixed price, cash on delivery, giving the farmers higher share of the value of their products.

Multiplying these farms' success stories in Farm Tourism, the Philippines enacted Republic Act No. 10816 or the Farm Tourism Development Act of 2016 to provide the policy and enabling environment for encouraging, developing, and promoting farm tourism in the Philippines. The said bill was filed by Sen. Cynthia A. Villar, Chair of Senate Committees on Agriculture and Food, Agrarian Reform, and Environment and Natural Resources; and the engagement of concerned government agencies such as DOT, Agricultural Training Institute of the Department of Agriculture (DA ATI), Technical Education and Skills Development Authority (TESDA), and the Department of Trade and Industry (DTI), not to mention pioneer farm tourism site operators in the country, continue to help refine its implementation.

"[In helping our lawmakers draft the bill], we made sure that the bill covers all areas, it provides for investment, promotion, financing, and incentives. It provides for market research and accreditation of farm tourism camps. When I was in Korea and Vietnam, people were actually asking me to help them pass a bill similar to the Farm Tourism Act", said Dr. Mina T. Gabor, President of the International School of Sustainable Tourism (ISST) and in two previous administrations, Secretary of Tourism in the Philippines.

Recognizing the role of farm tourism to Inclusive and Sustainable Agricultural and Rural Development (ISARD) among the farming communities in the ASEAN Region, the Southeast Asian Regional Center for Graduate Study and Research in Agriculture (SEARCA) organized the Exposure Workshop on Farm Tourism Practices in Southeast Asia on 4-8 December 2017 at its headquarters in College, Los Baños, Laguna. It brought together different stakeholders on farm tourism including farmers and practitioners, researchers, academicians, extension workers, regulators, and a young aspiring entrepreneur from six countries in the region – Cambodia, Indonesia, Philippines, Thailand, Timor Leste, and Vietnam – plus Taiwan represented by a resource person. 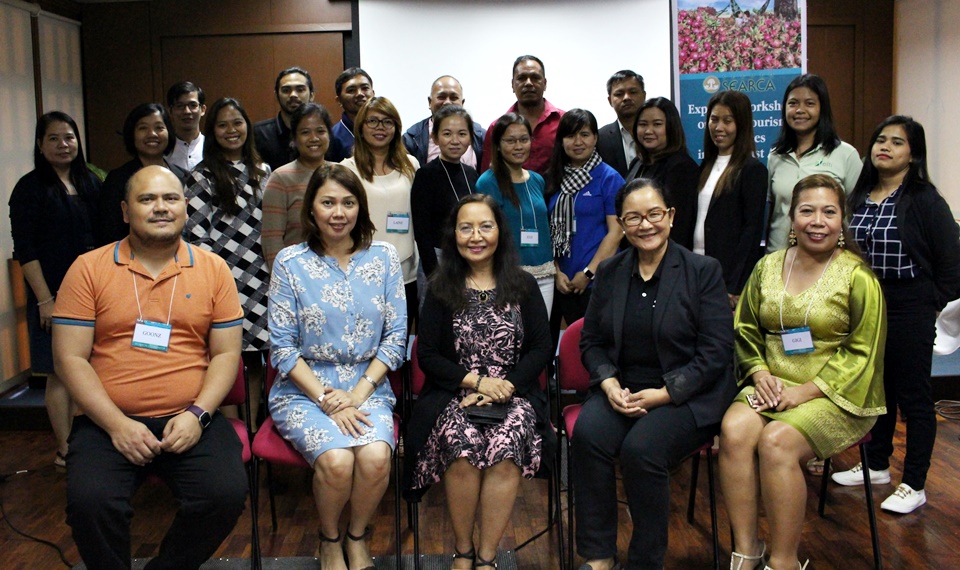 Participants and resource persons who completed the five-day exposure workshop beam with having crafted plans for farm tourism practice, university extension, or research to cap their learning gains.

In his welcome remarks, Dr. Gil C. Saguiguit, SEARCA Director, explained the Center's support to farm tourism, as it opens up a whole new perspective for agriculture to contribute to ISARD via the tourism route. In fact, SEARCA has spearheaded the First Philippine National Agritourism Research Conference in 2012. It aimed to identify research gaps and policy implications that can help develop agritourism in the country.

At the grassroots level, Dr. Saguiguit asserts that farm tourism is one pathway to ISARD as it opens up possibilities for diversification of income for small-scale farmers while promoting sustainable agricultural systems and community involvement and participation. The Center also sees it as an effective means to showcase agriculture as a productive business endeavor as well as an exciting field of study among young people.

"Agriculture and all its wonderful trappings when properly and uniquely packaged can help attract tourists to the country and promote an appreciation and understanding of the country's food system", added Dr. Saguiguit.

The exposure workshop served as a platform where different stakeholders from across the ASEAN region were able to share, learn, and update themselves on the varying states of and trends in farm tourism, including the excellent practices being exercised by farmers or farm owners in different parts of the region that can be emulated by others to boost farm tourism in Southeast Asia.

One important takeaway that the participants learned from the workshop, as raised by most workshop participants who are already practicing in the field, is the concept of inclusiveness and community involvement in setting up their farm tourism sites.

In fact, the Sampran Model in Thailand practices a sustainable model of farming and farm tourism which is based on community partnership and sufficiency economy. This community-driven initiative involves all possible stakeholders of farm tourism, which include the farmers, local governments, universities and academe, private enterprises, and even the media. This way, farm tourism within Sampran Community is well promoted; further activities and ventures get enough funding and support from the local government and private enterprises; and knowledge and technology on farm tourism are being updated from time to time through extension by nearby universities. The model also eliminated unnecessary actors in the food market value chain such as unfair middlemen.

Community involvement is also one of the keys to succes by other farms highlighted in the workshop such as the Mini Murrah Dairy Farm in Thailand, the Ephrathah Farms in Badiangan, Iloilo, and the Costales Nature Farms in Majayjay, Laguna.

Aside from best practices in farm tourism, participants also learned the elements of an enabling environment for farm tourism, such as policies and an improved support system from the government at the national and local levels.

In Thailand, for example, the Provincial Government of Chang Mai conducted a feasibility study on making the entire province an agritourism site. The study included the evaluation of the province's agricultural areas in terms of accessibility, attraction, and their readiness to be farm tourism sites. Analysis on the province's strengths, weaknesses, opportunities, and threats (SWOT) in terms of farm tourism was also conducted. Respondents for the study included the community leaders from all farm tourism areas in the province, local government officials, program leaders of agricultural-related projects in the province, and owners and managers of tourism destinations in Chang Mai.

Meanwhile, in her presentation, DOT Attache Gwendolyn Batoon, acknowledging the need to assess the country's farm tourism status in a more holistic and wider perspective, emphasized the need to identify the gaps on different aspects of farm tourism at the country level through research on potential market, human resource development, and institutional development. She also stressed the importance of country branding for the tourists to be immersed with the Philippines' local way of life, which is beyond the tourists' expectation and thus providing quality service at another level.

For a small island country with more than 3,000 farm tourism sites like Taiwan (farm tourism sites are more popularly known in the country as leisure farms), the challenge is to make their leisure farms more competetive to attract the tourists. As explained by Dr. Wan-Yu Liu of the National Chung Hsing University in Taiwan, competition actually raises the bar among leisure farms in Taiwan in terms of providing higher quality of service for their visitors. Liu added that the Taiwanese government exerts much effort to promote farm tourism in Taiwan and there are many government policies and programs that support farm tourism in the country.

Through open discussions, participants also got the chance to resolve some challenges and dilemmas faced by farm owners in farm tourism. For instance, livestock farms, especially the commercial farms, would prefer to keep the visitors off from the production area to avoid affliction of infectious diseases to farm animals. To resolve this, Ms. Charinee Chaiyochlarb of Mini Murrah Farm in Thailand shared that they alloted a smaller area for fewer number of animals which they can exhibit and can be shown to tourists. Ms. Gigi Pontejos-Morris, on the other hand, countered the wrong notion that only organic farmers (which comprise less than one percent of farmers in the Philippines) can develop farm tourism sites.

As culmination of their learnings from the exposure workshop, participants in groups of five developed a farm tourism initiative either in the form of a new farm tourism enterprise, a development framework for an exisiting farm, a research study, an extension program or a policy initiative. The outputs were presented during the last day of the workshop with the participants themselves serving as panelists and critics of the groups presentations.