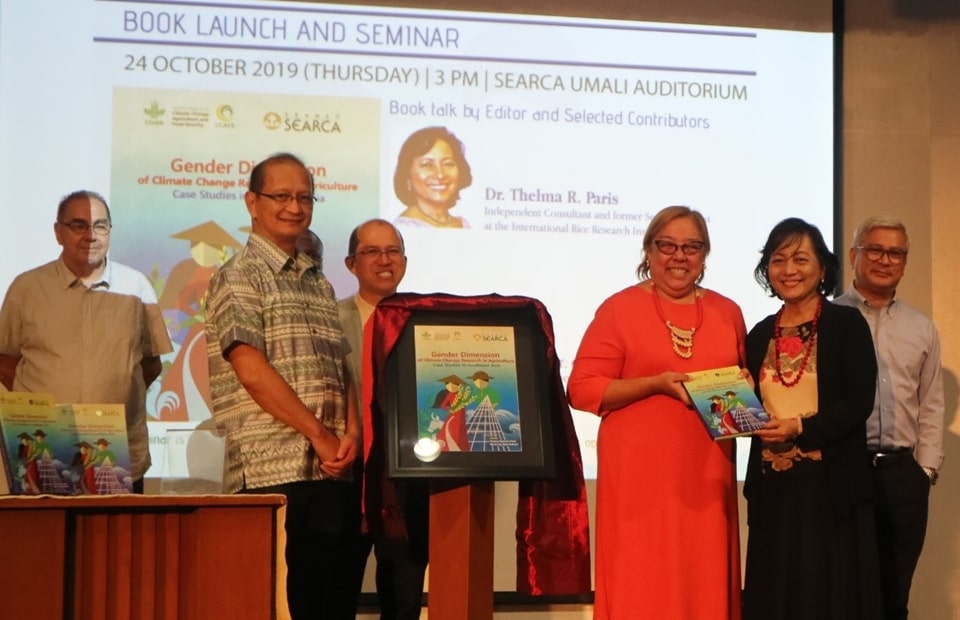 Dr. Thelma R. Paris (right), the lead book editor, hands a copy to Dr. Nina Castillo-Carandang, the youngest daughter of the late Dr. Gelia T. Castillo, to whom the book was dedicated, as (from left) Dr. Reiner Wassman, one of the writer-contributors of the book; Dr. Glenn B. Gregorio, SEARCA Director; Dr. Leocadio S. Sebastian, CCAFS SEA Program Leader; and Mr. Gary Carandang look on.

SEARCA headquarters, Philippines – "Working with women social scientists in developing plant varieties taught me to look at science holistically, not only at the plant but the farmer." Dr. Glenn B. Gregorio, SEARCA Director and renowned rice breeder, shared this life-long lesson in being a scientist from equally renowned former colleagues, notably the late national scientist and distinguished sociologist, Dr. Gelia T. Castillo, during the launch and seminar for the book titled Gender Dimension of Climate Change Research in Agriculture: Case Studies in Southeast Asia.

"They were the social scientists who told us to put a human face to science," added Dr. Gregorio. He also underscored the timeliness for SEARCA of co-publishing the book when it is crafting its 11th five-year plan, which aims to contribute to the sustainable development goals, one of which is gender equity.

Dr. Leocadio S. Sebastian, Regional Program Leader of the CGIAR Research Program on Climate Change, Agriculture and Food Security (CCAFS), a proponent of the SEARCA co-published book, mentioned that "the integration of research, planning, and implementation of agriculture and climate change interventions is crucial in achieving outcomes on agricultural productivity, climate resiliency, and food and nutrition security in Southeast Asia." He added that the integration "ensures that the impacts of climate-smart agriculture (CSA) research benefit men and women, equitably."

The lead editor of the book, Dr. Thelma R. Paris, mentioned several research items that are essential in determining the gender dimension of climate change research, including "the opportunities for CSA to benefit men and women and the youth from poor farming communities who are vulnerable to climate change risks." She also emphasized on the importance of examining the context in the study area, including risks, sources of livelihoods, gender roles, and social groups, and the enabling and constraining factors affecting the adoption, adaptation, and scaling out of CSA. 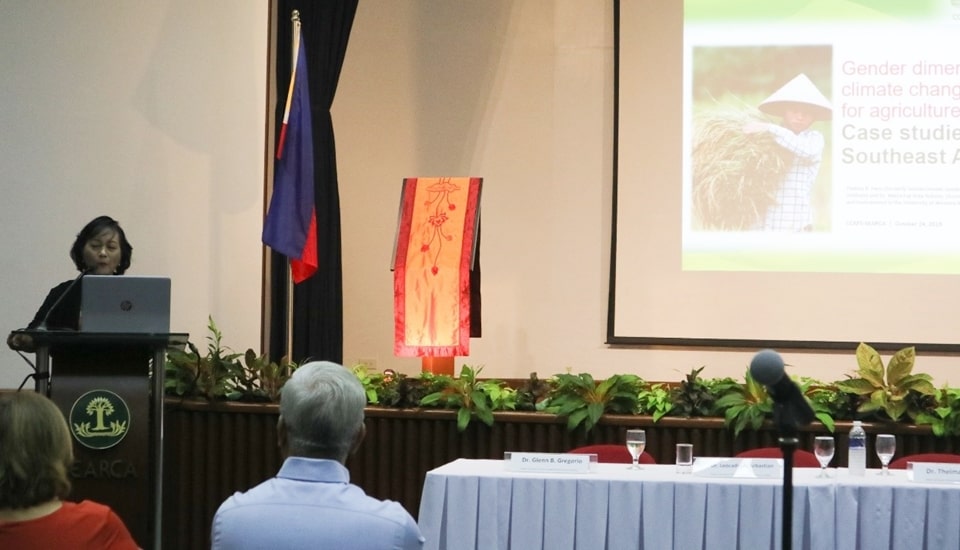 Dr. Thelma Paris discussed gender dimension of climate change research in agriculture in the Agriculture and Development Seminar Series (ADSS) of SEARCA, prior to the actual book launch.

Dr. Sebastian further attributed lessons on the essence of research to the late Dr. Castillo, for whom the book being launched was dedicated, quoting her as saying, "when the best science and scientists are devoted to the problems of those who have less in life, that's equity and ethics at its best."

The gender book features case studies on climate change, gender roles, and adaptation strategies in Southeast Asia. It was primarily compiled to respond to the need for a book on gender analysis in the context of climate change and agriculture. The book aims to find the links between socioeconomic and gender issues in the context of a changing climate.

The book is available in hard- and soft-bound prints from the SEARCA knowledge shop, while a pdf version may be downloaded for free from searca.org. Meanwhile, the Agriculture and Development Seminar Series (ADSS), in which the book launch was conducted, is a regular offering of SEARCA, and is open to the public. Schedules are announced at the events section of searca.org.