MONTPELLIER, France – The Southeast Asian Regional Center for Graduate Study and Research in Agriculture (SEARCA) signed a Memorandum of Understanding (MOU) with AgropolisFondation based here and Universiti Putra Malaysia (UPM) to strengthen and promote scientific cooperation in research, higher education, and capacity building in the field of agriculture, food, and sustainable development between France and Southeast Asian countries.

The signing of the MOU was held at the AgropolisFondationheadquarters on 28 May 2018. In attendance were the heads of major French national research and education organizations in support of the joint scholarship program that SEARCA signed with AgropolisFondation.

"The French national agencies saw the scholarship program as a vehicle to foster exchanges between French and Southeast Asian researchers, scientists, and students whose academic and research programs will be under the joint guidance of French and Southeast Asian academics and scientists along predetermined and commonly agreed research themes important to ARD," said SEARCA Director Dr. Gil C. Saguiguit, Jr.

He added that French institutions see SEARCA as their gateway to the region.

Under the MOU, SEARCA, AgropolisFondation, and UPM will offerPhDFellowships to Southeast Asian students who will conduct their research under the joint supervision of scientists, researchers, or professors from their respective home university and from any of the 41 higher education institutions and research units that are part of the foundation's scientific network, including University of Montpellier, Montpellier SupAgro, the French Agricultural Research Centre for International Development (CIRAD), and French National Institute for Agricultural Research (INRA).

Dr. Saguiguit, who holds a Doctorate from the University of Montpellier—the first Filipino with this distinction—has made great strides in connecting SEARCA to international development and donor organizations all over the world. This has allowed the drawing in of external expertise and resources to bear on agricultural and rural development concerns in Southeast Asia. 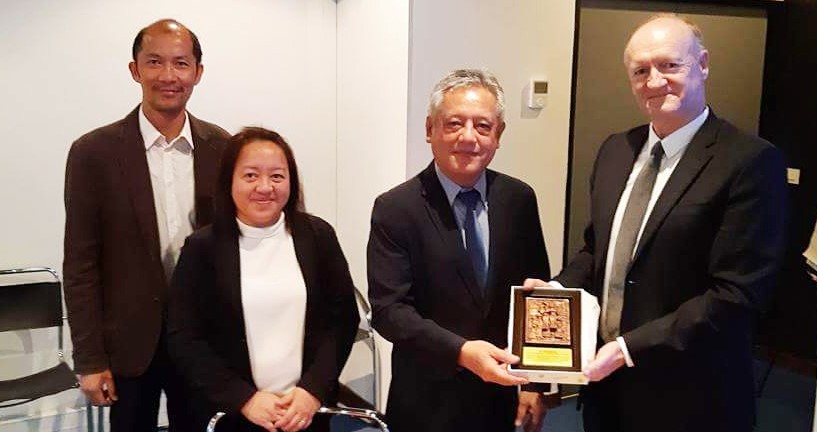 Dr. Saguiguit presents to Dr. Kosuth as institutional gift a replica of SEARCA’s growth monument. They were joined by Mr. Oliver Oliveros (leftmost), Deputy Director for Partnerships and International Cooperation of Agropolis Fondation.