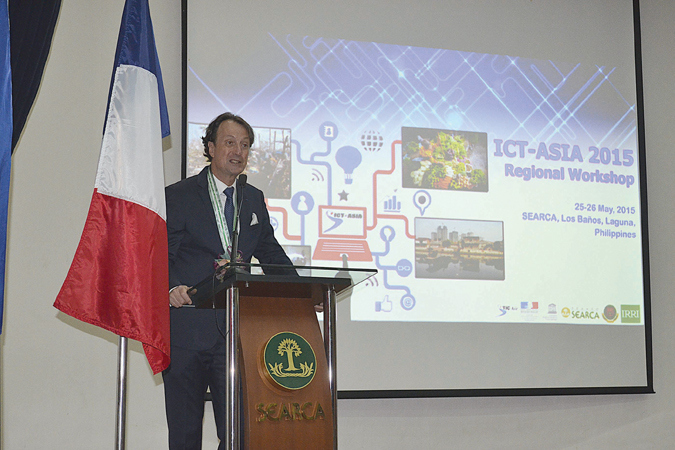 In Photo: French Ambassador to the Philippines Gilles Garachon delivers his message to Information and communications technology-Asia 2015 participants at the Southeast Asian Regional Center for Graduate Study and Research in Agriculture, University of the Philippines Los Baños, on May 25.

To ensure food security in the Association of Southeast Asian Nations (ASEAN) region, ASEAN member-countries should converge their information and communications technology (ICT), according to French Ambassador to the Philippines Gilles Garachon.

Climate change has been responsible in the disruptions to food productions not only in the region but also across the globe and the ever growing population poses another challenge to food security, Garachon said.

Garachon spoke in a forum on ICT on May 25 at the University of the Philippines Los Baños, Laguna, campus.

“Some very fertile regions may become deserts,” he said adding that today’s productive lands may become barren in the future as a result of climate change.

Rafael P. Saldaña, associate professor of the Ateneo de Manila University School of Science and Engineering, said “the Philippines is one of the most hazard-prone countries in the world.”

This is due to its location in the ring of fire, Saldaña said during the same forum organized by the Southeast Asian Regional Center for Graduate Study and Research in Agriculture (SEARCA). Recent statistics showed that the Philippines “has one of the highest number of people affected by natural disasters and has one of the highest disaster risk index,” he added.

The Department of Agriculture estimated the losses by the super typhoon to agriculture, which includes productions on rice, coconut, banana, and the fisheries, at over P31 billion as of January 2014, he added.

The application of ICT to food security can help the Philippines and other ASEAN countries cope with the threats of climate change to food supply, Garachon said.

ICT should be introduced to the stakeholders of food supply to ensure food security amid climate change, down to the smallest farmers and fishermen, according to Garachon.

An agreement on reduction of carbon emission must be reached among the stakeholders as sooner as possible to mitigate its damaging effect on food production, the French envoy noted.

The ICT forum gathered scientists from France and ASEAN member-countries to identify ICT applications to food security, climate change modeling and monitoring, disaster risk reduction and urban and rural informatics. The SEARCA said results of the two-day conference would be revealed in the coming months.