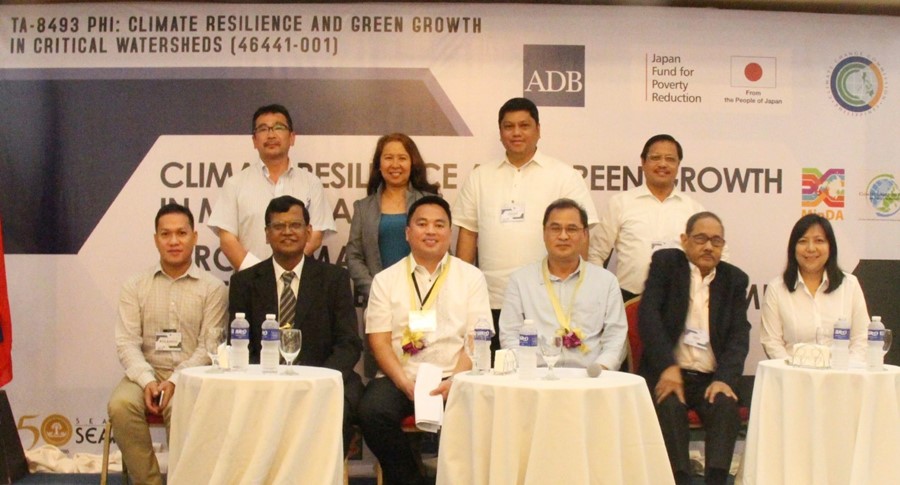 DAVAO CITY, Philippines – The Climate Change Commission (CCC) of the Philippines and Mindanao Development Authority (MinDA) calls for the adoption of climate resilience and green growth approach for the development of Mindanao in the Conference on Climate Resilience and Green Growth in Mindanao: Road Map to Sustainable and Inclusive Economic Development held on 9 May 2017 at the Grand Regal Hotel in this city. The Asian Development Bank (ADB) and a consortium of the Southeast Asian Regional Center for Graduate Study and Research in Agriculture (SEARCA) supported the initiative.

The joint statement read by the CCC Commissioner Noel Gaerlan, together with Dr. Srinivasan Ancha, Principal Climate Change Specialist ADB, and representatives of Secretary Abul Khayr Dangcal Alonto of MinDA and Dr. Gil C. Saguiguit, Jr., SEARCA Director, states that they shall "pursue holistic and integrated climate resilience and green growth road map, based on principles of ecosystems-based development planning, environmental protection, utilization of green and low emission technology, adaptive infrastructure development, consideration for women, children and indigenous peoples and other marginalized communities, and creation of livelihood options and green jobs to uplift the lives of our people in the Philippines in general and Mindanao in particular."

Commissioner Gaerlan said that "there is an urgency to approach local development planning at three fronts: climate and disaster risk preparedness, environmental stability and economic growth, in the light of the changing and worsening climatic conditions, which are important ingredients in "building resilience" thus saving lives.

He further emphasized that "CCC is aggressively promoting risk- and science-based approach, convergence and integration of various government efforts towards development of climate-adjusted national and local development plans.

Secretary Alonto, in his keynote speech delivered by MinDA Chief-of-Staff Abul Khayr Amalon Alonto II, emphasized that Mindanao as food basket is threatened by the impact of climate change, that recent occurrence of heavy flooding in several areas in Mindanao has claimed lives and properties and has become a serious concern to everyone."

Dr. Ancha Srinivasan of ADB noted in his opening remarks that "by integrating locally appropriate and gender-responsive climate change mitigation and adaptation actions in comprehensive land use and development plans, Mindanao and its LGUs can lead others in simultaneously addressing poverty and climate change and in achieving sustainable development goals by 2030."

Dr. Gil C. Saguiguit said in his welcome remarks that "Mindanao has vast potentials for agro-industrial development, which can contribute to our nation's food and nutrition security and poverty alleviation, however, these potentials are confronted with the adverse effects of climate change."

He emphasized that "agriculture remains to be the driver of Mindanao's development and a major backbone of the Philippine economy, and our best option against this challenge is to adapt and heighten the resiliency of agriculture to the effects of climate change."

The conference was supported by ADB and the Japan Fund for Poverty Reduction (JFPR)-funded project titled "Climate Resilience and Green Growth in Critical Watersheds," implemented by CCC and commissioned to a consortium composed of SEARCA as lead organization, CTI Engineering Japan, Woodfields Consultants, Inc. (WCI), and ERGONS Project Management.

Delegates to the Conference on Climate Resilience and Green Growth in Mindanao composed of representatives from the local government units, national government agencies, private sector, academe, nongovernmental and people’s organizations, and development partners at Grand Regal Hotel in Davao City on 9-10 May 2017