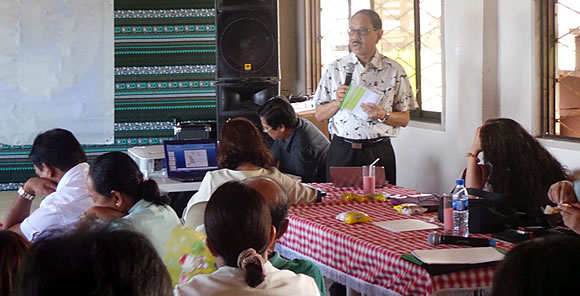 The project orientation workshops were conducted in Camarines Sur for Naga City and municipalities of Milaor and San Fernando; Davao Oriental for the municipalities of Banganga, Boston and Cateel; and Malacañang, Manila for Quezon City, Marikina City and Cainta, Rizal.

The CCC led by Forester Alexis Lapiz and Ma. Lovella Segayo discussed the green growth and ecotown framework and emphasized the importance of natural resource accounting (NRA) and vulnerability assessment (VA) in updating or formulating the Comprehensive Land Use Plan (CLUP) and mainstreaming the Climate Change Act (CCA) and Disaster Risk Reduction Management (DRRM) in the local development plans of the nine municipalities.

Likewise, the CCC presented the draft Memorandum of Understanding (MOU) with LGUs outlining the important role of local governments in the implementation of the technical assistance.

During the visit and orientation, the LGU representatives and some of their officials were happy and receptive to the assistance to be provided by the project, specifically in terms of capacitating them to mainstream climate change into their local development plans, as well as in demonstrating climate resilient green growth options in the critical watersheds covered by the three project areas, namely, Lower Marikina, Camarines Sur, and Davao Oriental.

Likewise, existing plans, programs and projects on climate change and DRRM, as well as data related to the types of disasters and the extent of its damage were gathered during the visit.