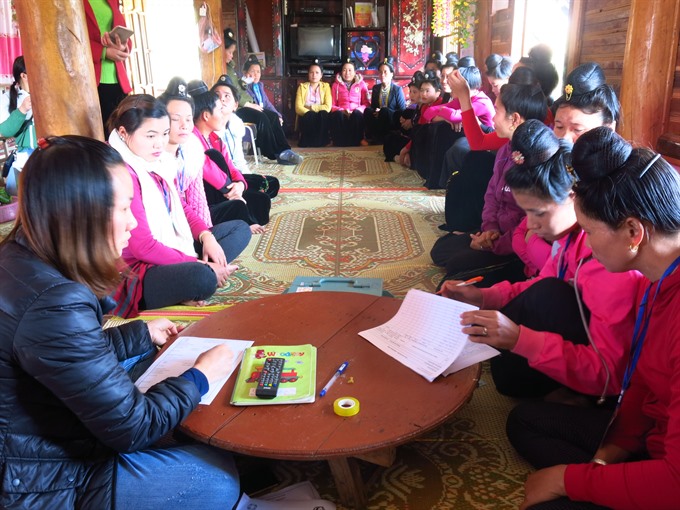 ĐIỆN BIÊN — The climate in the valley of Mường Phăng in the mountainous Điện Biên Province is no longer as it was over previous centuries. But the change has brought some benefits to local farmers.

The valley, roughly 21 km to the northwest of Điện Biên Phủ City, has gotten warmer over the last decade. The ethnic minority families who were born and grew up in the valley, in poverty, had relied mainly on a single summer-autumn rice season to make a living as the winter was too cold to plant anything. Now they have managed to double their incomes as the rising average temperatures in the coldest months allowed another rice harvest in winter and spring.

This kind of climate change is, of course, not all good news. Alongside warmer temperatures, it has brought about more flash floods that bury the village under mud, unexpected drops in temperatures, hoarfrost that freezes crops and heavier rains that flood the fields.

It became harder for the locals, who had little idea about what climate change means and struggled to adapt their lives and farming to the changes already in motion.

“According to the meteorology unit’s forecast, the chance of higher temperatures over years’ average is 75per cent, the chance of more rain over years’ average is 60per cent. But in people’s experience, temperatures this year would drop lower than last year because we had a better chestnut season, it was already cold at the start of the winter-spring season while the Mexican sunflower bloomed earlier than normal,” a young woman, Lò Thị Dương, read out loud in front of another 31 Thai ethnic women from Phăng 1 village in the Mường Phăng Commune.

What Dương was reading was a weather forecast for the whole winter-spring rice season in the first three months of 2018. The report shows the weather predictions of the meteorology experts in temperature and rainfall with different possible scenarios, together with recommendations for what farmers should do to prepare their valuable crops for such weather.

The report was the product of a regional project called Agro-Climate Information Services (ACIS) for women and ethnic minority farmers in Southeast Asia. The project has been carried out simultaneously in Laos, Cambodia and Việt Nam by the non-Governmental organization, CARE International, and the World Agroforestry Centre since 2015.

In Điện Biên, two communes of Mường Phăng and Pá Khoang were selected as the project sites due to their distinct climate to the rest of the province.

CARE Việt Nam project coordinator, Lê Xuân Hiếu, said that the communes were classified as sub-climate areas, with different weather patterns. That was where the project started.

“In Điện Biên in particular, and in Việt Nam in general, we only have weather forecasting down to the district level, not for communes, so it is impossible for the residents, especially farmers, to know exactly what the weather in their neighborhood will be like,” he said.

“It is even more important in sub-climate areas where the district weather forecast might be very different from the reality.”

To help the farmers overcome this problem, the project issued weather forecasts for two rice seasons, adding farming recommendations like how to prepare seeds for the predicted weather, the suitable timeline to start transplanting the seedlings into the wet field or which pesticides to use to save money with the most effective results.

27-year-old Dương was the leader of a group of women in the village who pool money together and let members take small loans from those savings. The goal of the group was to provide sustainable financial support to members and more importantly, help them to steer clear of loan sharks.

Such a group was a perfect launching platform for the ACIS project.

Twice a month, the group would meet up at one of the member’ Thai-style stilt houses and discuss what they should do with their fields at the time based on ACIS’s weather reports.

Only a few women in the group, who were fortunate enough to go to school and properly learn Vietnamese, were able to read the reports. Much more was just a little better than illiterate.

Though every family in the village managed to get a handout of the report, open discussion at the meetings, in Thai language, helped answer any questions and allowed all members to really understand how to best do their farming.

A project assessment by CARE shows that the rice yield in the winter-spring season in 2017 of 612 group members in Điện Biên increased by 910 kg per ha over the previous year, while that of 168 families in the same village but not joining the community group only rose by 780 kg.

The improvement in productivity was remarkably high when compared with another 315 families of the same conditions in other villages but not accessing the weather reports, as they only harvested 230 kg per ha more than 2016’s season.

“Folks in the past grew crops spontaneously so there were many pests and bugs which should appear at different rice growing stages, all coming at once,” Dương said.

“But they now plant rice at the same time (as the weather reports recommend), there might be only one kind of pest appear and the prevention work was easier.”

Dương added that what she appreciated most from the reports was learning how to use herbicides and pesticides correctly.

“At first many others and I didn’t know which pesticides to spray. I just bought everything I could and the pest might still be alive. Now I know exactly what to buy and when and how I should use it.”

Vì Văn Thành was a Thai ethnic farmer in the neighboring commune of Pá Khoang, and also the leader of the local Learning Farmers group. He said that the residents have been using fewer pesticides and fertilizers since the ACIS project began.

According to Thanh, the residents stuck to nitrogenous fertilizer for every rice season regardless of the weather or the condition of the soil.

“Now thanks to the project they know which particular fertilizer should be used each season,” he said.

“And also pesticides. People used to spray all the time, in the morning, afternoon and evening.”

That has changed. Thanh said instead of eight to nine pesticide tanks sprayed over 1,000sq mof rice field in the past, he and his wife, who was also a member of the village’s loan group, only used a half of that, four to five tanks.

“It saved a lot of money while still being very effective,” he said.

“For example, they now know very well the fertilizing techniques so that the fertilizer won't be washed away in the rain,” he said.

“If the project continues, I believe that the people will have the knowledge and skills to improve even more in the long-term”.