World Bank has warned that CC is now the direst threat to human beings, bringing along extreme disasters like flooding, heat waves, land slide, wildfire. In Vietnam in 2020, flooding and land slide in the Central region caused a damage of US$1.52 billion. They are the result of over-exploitation of natural resources, deforestation, exhaust fumes emission from human activities.

Statistics from the Vietnam Institute of Meteorology, Hydrology and Climate Change (under the Natural Resources & Environment Ministry) reveal that by 2050, if the sea level increases by 18-30cm, Vietnam will lose about 2 percent of its GDP. Its agriculture will bear the most damages, seeing a drop of 13.5 percent in its added value and a loss of $43 billion from 2020-2100.

In 2100, if the sea level rises by 100cm, 6.3 percent of the surface area of Vietnam will be lost, while the affected proportions of the railway system, national roads, and provincial roads will be 4 percent, 9 percent, and 12 percent, respectively. The Mekong Delta will experience the most severe damages, at 52.39 percent; followed by the Red River Delta at 31.4 percent and the Central coastal area at 9.1 percent. 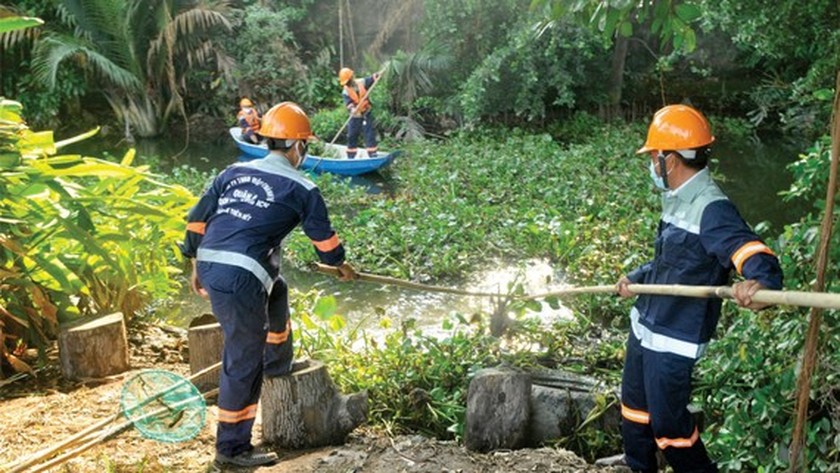 Channels in District 4 of HCMC are cleaned from waste (Photo: Saigon Online)

Aware of that, Vietnam has so far launched various solutions, campaigns to cope with and fight against CC. Functional agencies are encouraging the public to replace fossil fuel with renewable energy like solar power, wind power, biomass. Agricultural activities are now changing to more environmentally friendly ones. Sustainable forestry development programs integrate initiatives to reduce GGE due to forest loss and degradation.

More remarkably, Vietnam has given its commitment at the 2021 United Nations Climate Change Conference (COP26). Accordingly, Vietnam commits to reducing its net emission to 0 by 2050 via the application of such measures as policies to monitor manufacturing activities and mitigate GGE for each type of business establishment, technological transfers to use production lines that release less greenhouse gas. Vietnam is at the same time conducting research for the development of the carbon market.

Director of HCMC Urban Environment Co. Ltd. Huynh Minh Nhut stated that to effectively reduce GGE, there must be close cooperation in the community, along with propaganda campaigns for citizens to classify waste at source, recycle used items, when possible, in order to decrease the waste amount transported to landfills, and in turn reducing their carbon footprint.

Vice Chairman of HCMC People’s Committee Vo Van Hoang shared that the city is under unrelenting pressure of CC, such as sea level rise, underground water decrease, urban subsidence. Adding to that is environmental pollution caused by manufacturing activities, creating a burden on the outdated infrastructure of the city.

Obviously, sustainable development is the only choice of HCMC at present. Many critical projects have been launched: smart city establishment, digital transformation, traffic planning, anti-flooding planning, sewage treatment, transformation from labor-intensive economy to innovative one, and encouragement of circular economy.

Deputy Director of the HCMC Department of Natural Resources and Environment Nguyen Thi Thanh My informed that in April 2022, the city collaborated with World Bank to form a taskforce for comprehensive and sustainable development. The taskforce will focus on 8 projects, most of which focus on promoting low-carbon-emission urban areas, addressing policy problems with related state agencies, ministries, and the Central Government.