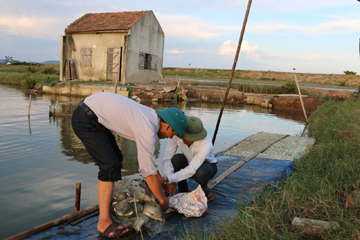 HANOI - Vietnam is set to increase shrimp production and exports in a bid to adapt to climate change which causes rising sea levels and increasing salinity in the country's southern Mekong Delta.

Vietnamese Minister of Agriculture and Rural Development Nguyen Xuan Cuong said the country's shrimp sector needs to build a strong brand in the global market so that it can contribute to agriculture growth in the rest of 2016.

In the context of climate change, Vietnam can turn challenges into advantages as the Mekong Delta will convert some rice growing areas into seafood breeding due to rising sea levels and increasing salinity, Vietnam's state-run news agency VNA quoted the minister as saying on Monday.

Since the beginning of 2016, in Vietnam's Mekong Delta, the drought and decrease in groundwater levels have resulted in the most extensive saltwater intrusion in 90 years, the worst since records began.

In April, Vietnam's National Assembly has ratified a resolution on
adjusting land use planning by 2020. Accordingly, some 400,000 hectares of rice plantation will be converted into growing other crops in combination with aquaculture. Most of these lands face frequent drought and saline intrusion due to climate change.

Under such transition, there is potential for shrimp products to develop, Cuong added.

This year, Vietnamese shrimp exports are witnessing positive signals from its markets due to decreasing global shrimp supply and increasing import demands.

According to Vietnam Association of Seafood Exporters and Producers, Vietnam's shrimp export revenue is estimated to surpass 3 billion U.S. dollars, up 10 percent year-on-year.

Vietnam has shipped shrimp to 75 countries and regions.