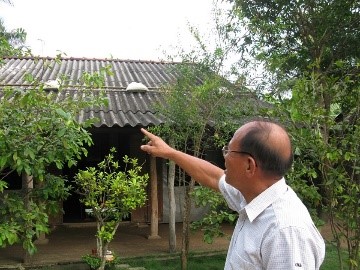 Huynh Van Ngot says that since his family reinforced their roof and pillars last September, they have felt safer during storms.

“I asked my sons to place four sandbags on the corrugated tin roof and anchor the interior pillars  to concrete poles fixed in the ground with zinc wire,” says the 67-year-old resident of Long Binh Commune, Go Cong Tay District, Tien Giang Province.

The old man learned how to reinforce his home from Oxfam, an international non-government organization that has worked in Vietnam since 1955.

“The Oxfam agent also encouraged my family to build a clean toilet in our house instead of using open-air toilets built over catfish ponds, which pollute the environment. I found her suggestion reasonable, so I followed,” says Ngot.

Strengthening the house and building a hygienic toilet are just two of many changes that took place at Ngot’s house and his commune thanks to an ongoing Oxfam campaign to raise public awareness on disaster risk reduction and climate change adaptation in Mekong Delta.

The campaign aims to increase understanding for 26,000 families in Ben Tre, Tien Giang, and Tra Vinh provinces when the program ends in 2017.

“We achieved some encouraging results in a short time," said Nguyen Thi Dieu Hien, Oxfam Project Coordinator for the Mekong Delta. "More than 6,000 families have registered to carry out actions to reduce or adapt to climate change.”

Among these actions are “reinforce your home”, “keep a first aid kit at home”, “save electricity”, “sort garbage and reuse inorganic waste”, and “plant trees around the house.” Families can register to implement as many actions as they like.

“People may forget [such actions] after hearing about them on radio or other media channels. But this poster (stuck on the house wall) will serve as a reminder of a commitment the family makes to themselves and with program coordinators,” Hien said during a workshop in Ben Tre on July 4.

The Oxfam program is expected help the Delta residents given that 41 percent of them said they were unaffected by climate change and believed there was no need to do any thing, according to a 2013 survey by BBC Media Action.

The survey also showed that only 16 percent are acting in response to changes in climate and want to do more while 19 percent are worried about the near future.

Vietnam is one of the most disaster-prone countries in the world, susceptible to tropical storms, floods, drought, sea-water intrusion, landslides and forest fires. The Mekong Delta is among the most vulnerable regions in the country.

“The majority of the Khmer are poor and lack stable employment. Hence, they are vulnerable to climate change,” Phuong told the workshop. “Awareness raising will significantly contribute to reduce the impact of ongoing disasters and climate change on the Khmer community."

“Under the Oxfam program, we accept imperfect solutions,” project officer Dinh Cong Tri said, “For example, a poor Khmer family saved enough money to buy a toilet for the rest room. To save money, they then covered the room with bags having used for containing fertilizer. We still appreciate this, which is better than the old (open-air) toilet.”