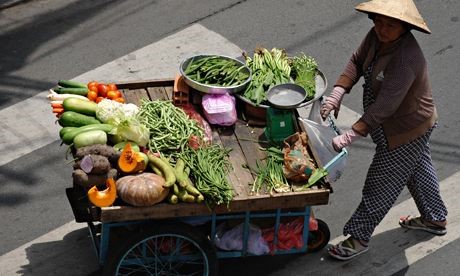 Public-health scandals are reported almost weekly by the media in Vietnam. The public is beginning to take notice and so are farmers, including Tran Van Dao, a market gardener and a member of a co-operative in Van Duc, a village on the edge of Hanoi. The co-operative's produce is certified by VietGAP – meaning good agricultural practices. Launched in 2008, this certification system requires farmers to keep a record of all the pesticides and fertilisers they use. Yearly checks are supposed to be carried out. But it is not proper organic farming.

"The difference from a farmer who's not certified is that I can only use authorised substances and I also have to leave at least two weeks between the last treatment and the harvest," Tran says, as he inspects his plot.

To meet demand from the emerging middle classes and the new big retailers, agriculture is starting to adopt minimal standards for environmental protection and public health.

In the 1990s a government "healthy vegetables" scheme was set up that ensured standards for water, air and soil quality.

"With certified vegetables, the environment is protected, output is steadier and prices higher," says Minh Nguyen Van, deputy head of the Van Duc co-operative. But gains are slight. A certified cabbage may fetch 24 cents a kilo, compared to 19 cents for an ordinary cabbage.

Only subsidised farmers' groups can afford the cost of certification, which is equivalent to $850 a hectare. Hanoi city council paid for the Van Duc Co-op to get their registration.

Supervision of farming is still fairly haphazard and sanctions almost non-existent. "We don't analyse everything, because the tests cost too much, particularly for insecticides," says Nguyen Thi Tan Lo, an economist at the Fruit and Vegetable Research Institute, which works in partnership with France's Centre for International Co-operation on Farming Research for Development (Cirad). "Often the results come through after the produce has been sold and consumed," Nguyen adds.

Poor supervision, coupled with overuse of pesticides and fertilisers, remain key problems, but over the past two years the government has prioritised improving farming standards.

This is a big challenge. "On the world market Vietnam has chosen to concentrate on high-volume output, low prices and only mediocre quality," Girard says.

Vietnam is the world's third-largest source of aquaculture products, specialising in prawn and pangas (catfish). But allegations of excessive use of antibiotics, including some that are banned elsewhere, have led many importers to stop buying Vietnamese products.

"Some aquafarms use meal mixed with antibiotics, often imported from China, without knowing what it really contains. They say they use it as long as it works, then move on to another product," says Samira Sarter, a specialist in food microbiology at Cirad.

"They're pushing the limits all the time," Girard adds. "A poultry farmer, rather than reporting a sick animal to the authorities, will try to sell it before it dies. It's a problem of poverty."