At the meeting, VFF President Nguyen Thien Nhan asked for help from the RoK in training personnel in information technology for Vietnam. 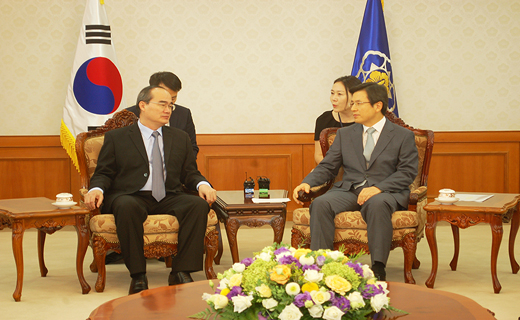 He said Vietnam is in the period of golden population, with its labour force to reach 65 million by 2025, which makes the country an attractive destination for international investors, including those from the RoK.

The President took the occasion to thank the RoK for its decision to provide 300,000 USD in emergency relief to Vietnam’s central region and Mekong Delta to help them overcome the impacts of salt water intrusion, and hoped that the RoK will continue to support Vietnam in coping with climate change.

President Nhan mentioned China’s move to illegally build military bases and artificial islands in the East Sea, which causes tension in the region. He hailed the RoK government’s position regarding the East Sea issue, particularly its support of the settlement of disputes by peaceful means with respect for international law and without militarisation.

Prime Minister (PM) Hwang Kyo-Ahn congratulated Vietnam for winning a gold medal at the Rio Olympic 2016, the country’s first ever at an Olympic Games.

Regarding developments on the East Sea, the PM reiterated the viewpoint that related parties should settle sea-related disputes on the basis of international law and international agreements signed by concerned parties.

The PM suggested Vietnam take measures to remove tax-related obstacles for the Vietnam-RoK technology incubator project in Can Tho City, as well as allow RoK defence firms to join in efforts to upgrade Vietnam’s defence capacity.

PM Hwang Kyo-Ahn extended an invitation to PM Nguyen Xuan Phuc to pay an official visit to the RoK on the occasion of the upcoming anniversary of bilateral diplomatic relations.

During the visit, the VFF President also chaired a seminar on achievements of Vietnam’s 30-year Doi Moi (renewal) in Sejong city, where he fielded many questions from RoK scholars.