Understanding that Vietnam is one of the most heavily suffered countries of climate change, the Government has already introduced the national adaptation plan to this environmental issue in the period from 2021-2030, with a vision to 2050. Ho Chi Minh City (HCMC) has, therefore, prepared its own solutions to successfully carry out this plan, ensuring both social security and sustainable development.k

In the last 50 years, the average temperature of Vietnam has increased by about 0.62 degrees Celsius while the sea level also rises by 3.34mm per year. That leads to a series of severe disasters.

It is estimated that in 2100, when the sea level goes up by 1m, 40 percent and 11 percent of the surface area of the Mekong Delta and the Red River Delta respectively will disappear, directly affecting the life of approximately 12 percent of the Vietnamese population. 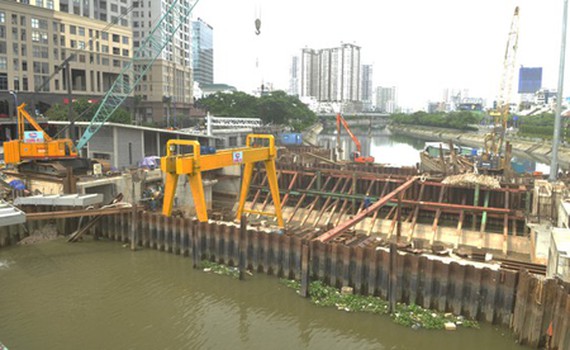 The project to prevent urban flooding due to climate change is under construction on Ben Nghe Canal. (Photo: SGGP)

Forecast from the Asian Development Bank (ADB) reveals that 90 percent of Da Phuoc Landfill faces the flooding risk, which might result in the dangerous release of pollutants to the neighborhood.

Adding to that is the more serious urban flooding status in the near future, affecting solid waste processing activities (including collecting, transporting, and treating) while reducing the durability of related facilities and devices. This calls for an urgent solution for waste handling to better adapt to climate change.

This environmental problem also disturbs any sustainable development plans and poverty erasing campaigns of Vietnam, urging for an action to lessen damage and improve the productivity of state management tasks.

To address these issues, the HCMC Department of Natural Resources and Environment has gradually introduced several plans and policies to integrate the fighting tasks against climate change into various fields such as increasing the performance of energy and natural resources use in socio-economic activities, reducing greenhouse gas release.

What is more, in the major project to transform HCMC into a smart city, the goal of monitoring environmental ratings via advanced devices has been carried out throughout the city. The municipal authorities are now cooperating with international and domestic organizations like the C40 Cities Climate Leadership Group or the Japan International Cooperation Agency (JICA) to actively protect the environment.

Accordingly, the priority of the plan should be to reduce the vulnerability and risk rates against climate change. This means an increase in adaptation ability of the public and economic sectors, achieved via investment in scientific research in the field and awareness raising to be ready for possible changes caused by climate change.

To fulfill these goals, the Government asks that related state units and industries perfect their own mechanisms and policies to better adapt to climate change. Sufficient legal foundation and technological conditions should also be focused so that adaptation tasks can be smoothly integrated into strategies and plans for disaster prevention.

A close cooperation across industries, fields, ecologies and even the whole community is necessary to develop the resistance ability against unexpected changes of the climate.

Finally, the authorities should pay attention to infrastructure upgrade to minimize any risk resulted from climate change to the society.

Vietnam determinedly works closely with the international community to protect the Earth’s climate and environment at all cost.