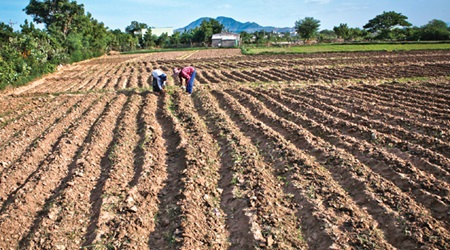 HA NOI (VNS) — The impact of El Niño in 2016 will likely surpass last year's record to become strongest ever in history, according to experts.

Hoang Duc Cuong, Director of the National Centre for Hydro-Meteorology Forecasting (NCHMF), issued the forecast at a conference held late last week to review the national program on natural disaster and flood prevention, and prepare a plan for 2016-2020.

This year, El Niño's weather pattern is expected to have a negative impact on natural disasters in the country, according to Cuong.

Cuong also revealed that the total number of storms and tropical depressions witnessed this year would be probably fewer than the annual average in recent years, but more storms were expected to occur near the end of the year.

Further, the average temperature would be one degree Celsius higher than last year's temperature in the North, and 1.5 degrees in the Centre.

More extended heat waves would likely strike throughout the country, resulting in serious droughts to many areas, he added.

As it was expected to cause fewer storms and tropical depressions in the East Sea, an average rainfall was predicted to be 25 to 50 percent less than in previous years, especially in the central region during the first half of 2016.

He also expected milder cold spells in January and February – the peak months of winter.

However, Hai predicted prolonged severe droughts in the central, Central Highlands and southern regions in the first months of this year.

Further, water shortages are likely to occur in some northern localities, particularly in mountainous and midland areas, according to the service.

In the dry season from late 2015 to early 2016, the amount of river water in the central and Central Highlands regions is forecast by the service to be 20 percent to 40 percent lower than average.

In the south central coast, river levels will be 60 percent less and 20 percent to 40 percent lower in the Mekong Delta.

As a result, saltwater intrusion in the mouths of the southern rivers will occur earlier and become more severe than in previous years.

Besides a major concern of floods and storms, the Deputy PM also cautioned experts to pay more attention to tsunamis and earthquakes, which had been reported to have occurred more frequently in the last several months in some areas of the country.

Also speaking at the conference, Minister of Agriculture and Rural Development Cao Duc Phat, who is also Head of the National Steering Committee for Natural Disasters (NSCND), vowed to mobilize all forces to deal with the complicated situation of climate change.

The minister noted that a boost to speed the implementation of a national project on improving public awareness of natural disasters, and their contribution to manage damage caused by natural disasters, were among the key goals of the committee this year, as well as in the coming years.

El Niño reached its peak last year, the same as during the historical 1997 episode, and played a very strong role in the country's resultant weather.

Last year's storms with tornados and floods caused heavy losses to socio-economic development, with the total damage estimated at more than VND8 trillion (US$360 million), according to a report from the NSCND.

The report noted that 36,800 houses had been destroyed, 345,000ha of crops were wiped out and 154 people were killed last year due to natural disasters. — VNS