Vietnam expects to have more regulations on investment and managing green cities and climate-resilient urban areas as the Ministry of Construction is compiling a draft decree on the issue.

The draft revised decree on Investment, Management of urban development would replace the current one from seven years ago.

According to the Ministry of Construction, Decree 11/2013/ND-CP regulates investments in urban development but does not have any specific policy projects that apply advanced models like smart urban areas, environmentally-friendly urban areas.

Until now, investors self-announce their projects meet criteria of green buildings or biological urban areas without inspection, verification from functioned agencies, which, in some cases, affect the rights and benefits of house buyers in those projects. 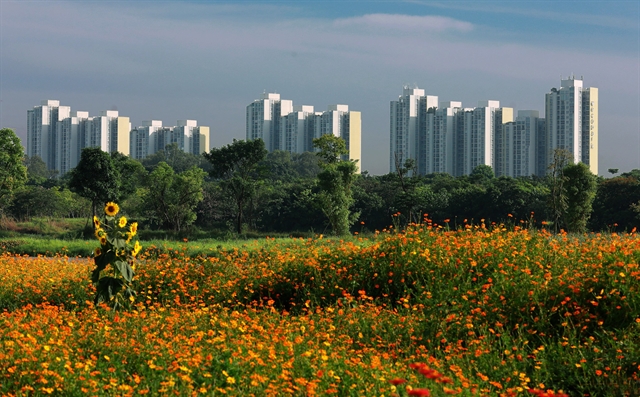 Part of Ecopark - a model of green urban area in Vietnam. (Photo: VNA)
The ministry has found it necessary to issue regulations to further promote the diversification of advance urban development models.

The draft would also include regulations on incentives for projects that develop such advance urban development models.

In Vietnam, rapid urbanisation has appeared since 1986 when the country started its Doi moi (Renewal) policies with sweeping liberalisation in all sectors. The country had about 500 urban areas in 1990, then 646 urban areas in 2000 and now, more 800 urban areas.

The current urbanisation rate is about 37.5 percent, urban areas contributes about 70 percent of the country’s gross domestic production.

Urban areas are usually hubs of economy, politics, culture, education, healthcare, tourism or entertainment in regions or of the country. Economic activities in urban areas also help create jobs and make use of the redundant labour in rural areas.

The urban infrastructure development has failed to catch up with the urbanisation pace, resulting in problems like traffic congestion, traffic accidents or environmental pollution.

General Secretary of Vietnam Real Estate Association Do Viet Chien said that trees are just one factor that makes an urban area green, chinhphu.vn reported. “A green urban area must control its waste, recycle the waste, use clean energy, use energy efficiently and use environment-friendly materials,” he says, adding that the areas are also operated and managed in manners that are friendly to the environment.

Developing modern sustainable urban areas is a trend of global real estate but the conception of modern urban areas is still controversial, according to Chien.

In Vietnam, Hanoi and many other cities are expanding but the way they have been urbanised affected the quality of the living conditions, creating arising problems in environment, planning, infrastructure and public services.

“The urbanisation is happening too fast while relevant regulations/legal framework or policies on urban development are failing to catch up,” Chien said.