Published on 1 March 2022 by VNA Vietnam

The Mekong Delta, the largest agricultural hub of Vietnam, should be confident to surmount difficulties and become a role model in climate change adaptation in the world, said Minister of Agriculture and Rural Development Le Minh Hoan.

Agriculture will remain a pillar of the economy in the coming years, so it needs to grow in a new direction which is shifting from separate development within each locality to inter-locality and inter-regional connectivity to boost common development, he told a meeting with agriculture officials of the 13 Mekong Delta localities in Bac Lieu province on February 9.

Highlighting the tasks for 2022, the minister asked the localities to boost eco-farming to meet the global consumption demand, noting that agriculture should not be developed at the expense of the environment or people’s health.

An aerial view of Ca Mau Cape in the Mekong Delta province of Ca Mau, which is also located in the southermost of Vietnam (Photo: VNA)

They need to stay dynamic, flexible, and adaptive to the new normal context while effectively developing the rural economy, creating jobs, and raising locals’ income, which can be done by setting up cooperatives and improving their operations, he recommended.

Local agriculture officials said since the Government issued a resolution on sustainably developing the Mekong Delta in adaptation to climate change in November 2017, the localities have been making efforts to weather difficulties and challenges and carry out agricultural promotion solutions, thus achieving fruitful outcomes.

International organisations and development partners have also highly valued and actively assisted the region to expand farming, they noted.

They also pointed out certain problems such as the imbalance in food security, environmental pollution, land subsidence, the depletion of underground water and water from the upstream Mekong River, riverbank and coastal erosion, along with human resources and infrastructure issues, calling for support from the ministry to address those problems in the time ahead. 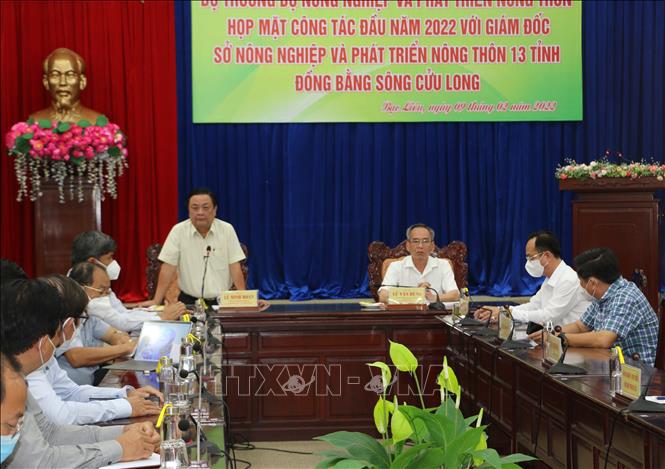 An aerial view of Ca Mau Cape in the Mekong Delta province of Ca Mau, which is also located in the southermost of Vietnam (Photo: VNA)