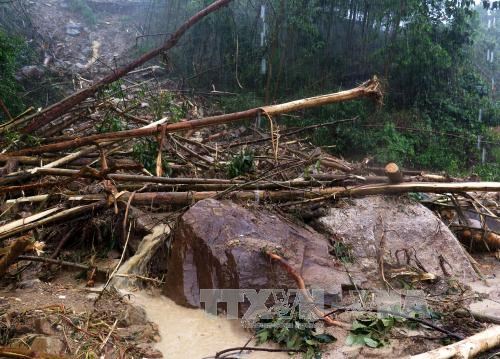 Many areas in the northern mountain province of Lao Cai will be affected by natural disasters during the rain and flooding season this year (Photo: VNA)

Lao Cai (VNA) – The northern mountainous province of Lao Cai is exerting every effort to minimise the impacts of climate change.

In addition to raise public awareness of the role of nature, the province has taken concrete actions to protect the environment and develop the economy sustainably.

The whole area of forest and forestry land has been managed systematically while protective forests have been protected and developed with a total area of over 156,000 hectares, including 101,000 hectares of natural forest.

Lao Cai has formed and put into use special-use forests such as the Hoang Lien National Park, Hoang Lien – Van Ban Natural Park and Bat Xat Natural Park with a combined area of 64,000 hectares and more than 2,000 kinds of flora, including valuable species like Van Sam, Bach Xanh, Thong Tre, Dinh Tung and Po Mu.

Furthermore, the province has constructed wood processing plants along with material areas while enhancing the win-win cooperation between enterprises and local people.

It has piloted a project to allow State-owned businesses to manage protective forests and encouraged the growing of trees in families, residential clusters and urban areas.

Thanks to these efforts, Lao Cai’s forest coverage rate increased to 53 percent in 2015.

Climate change has caused heavy losses for Lao Cai province over the past years. According to Luu Minh Hai, Director of the province’s Hydro-meteorology Centre, the average temperature in the province has been increasing, even hitting 40 degrees Celsius in summer, while hails, whirlwinds and flash floods have been more frequent.

Between 2003 and 2015, there were 20 flash floods and landslides in Lao Cai, killing 261 people and injuring 218 others. Nearly 2,000 houses and 12,000 ha of rice and crops were damaged while more than 1,300 irrigational works and other facilities were destroyed, resulting in an estimated economic loss of thousands of billions of VND.

Only two storms in August this year cost the province 680 billion VND. Since July 2016, about 20 locals have been killed by whirlwinds, lighting, flash floods and landslides.

The prolonged frosty winter has resulted in the death of around 15,000 cattle each year while severe droughts have occurred in many areas.-VNA