Heatwaves hit much of Asia earlier than expected 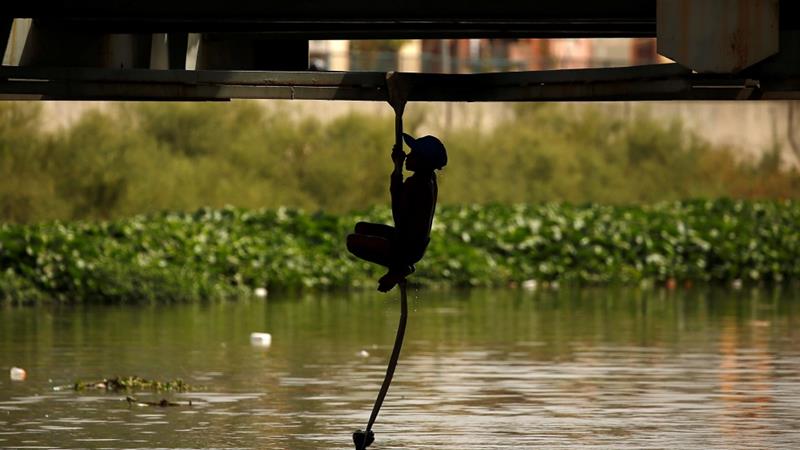 A boy climbs a rope after jumping into a canal as temperatures soar in New Delhi, India, June 6, 2017 [Cathal McNaughton/Reuters]
Record temperatures have been recorded from Pakistan to Vietnam before monsoon rains.

Prolonged periods of heat are expected in a northern hemisphere summer.

Across Asia, the heat tends to build up early, with temperatures peaking before the summer monsoon arrives in June and July.

Extreme heat has been experienced very early this year in parts of South and East Asia.

In recent days, northern Vietnam has experienced temperatures in excess of 40C, with 42.5C being recorded in central Hanoi on June 3.

The only time a higher temperature was recorded in the city was 42.8C in May 1926. But this temperature reading is unreliable.

The combination of high temperatures - in excess of 40C - and humidity rendered the area around Hoan Kiem Lake, a popular destination with locals and tourist alike, a virtual no-go area.

The heatwave, brought about by a flow of warm air from the mountains of Laos, was broken by severe storms which caused an eight-degree drop in temperature in just a few minutes. Damage was also reported as gusty winds swept through the city.

Soaring temperatures are a feature of weather in late May and early June across Indiaand Pakistan but this year's build-up of heat has been exceptional.

The Indian states of Rajasthan and Odisha experienced exceptional heat. Sixteen people are reported to have died because of the heat in Odisha.

Fatalities have also been reported in Rajasthan, where temperatures between 44C and 47C were recorded in recent days.

On May 28, Turbat, in Pakistan's Balochistan province, recorded a maximum temperature of 53.5C. This is certainly one of the highest temperatures reliably recorded anywhere in the world using surface-exposed thermometers.

It will have to be investigated, along with a similar temperature recorded in Mitribah, Kuwait in July last year. But these two readings could turn out to be the highest recorded globally.

Temperatures in excess of 50C have also hit parts of Oman. Qurayyat and Joba both recorded a high of 50.8C on May 30 and 31. At the same time, temperatures along the Red Sea coast of Saudi Arabia reached 48C in Wejh.

Not surprisingly, increasing heatwave severity and frequency are predicted according to climate change theory. It is likely that heatwaves of both 2016 and 2017 are manifestations of those predictions.